Please ensure Javascript is enabled for purposes of website accessibility
Log In Help Join The Motley Fool
Free Article Join Over 1 Million Premium Members And Get More In-Depth Stock Guidance and Research
By Dan Caplinger – May 2, 2018 at 4:29PM

Find out how earnings helped some of these companies.

Wednesday was another bumpy day for the indexes, with most major benchmarks moving lower after staying fairly close to unchanged throughout much of the session. Earnings season hit its peak, creating several crosscurrents within the overall market, and investors also looked closely at the latest from the Federal Reserve to get hints about the likely direction of interest rates. Even with worries about inflation and other factors holding back the broader market, some stocks saw extremely good performance. Marathon Petroleum (MPC 0.64%), Wayfair (W -5.82%), and Frontier Communications (FTR) were among the best performers on the day. Here's why they did so well.

Shares of Marathon Petroleum climbed 4%, reversing a portion of its losses from earlier in the week. Marathon had said at the time that it would acquire industry peer Andeavor in a stock and cash deal worth $35.6 billion. Investors in Andeavor will have an option to receive either $152.27 per share in cash or 1.87 shares of Marathon stock, subject to a maximum of 15% total cash consideration. Initially, Marathon Petroleum had given up ground, as investors sought to lock in arbitrage strategies by selling Marathon shares short in anticipation of receiving offsetting shares when the merger is complete. Yet today's jump in the energy market boded well for prospects for refined oil products, and as gas prices approach $3 in many areas, refiners like Marathon could make out well. 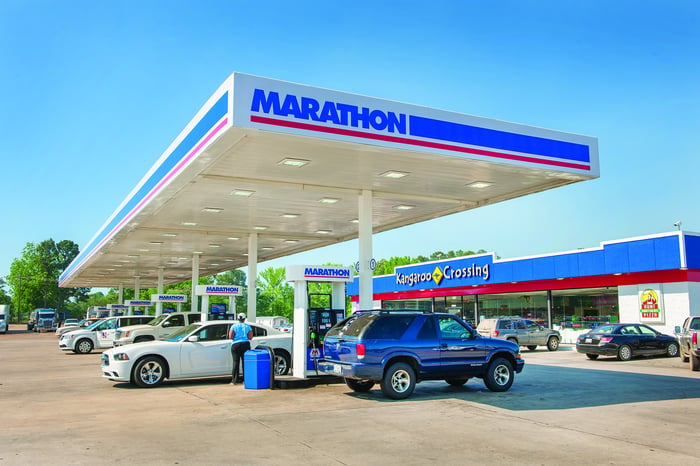 Wayfair stock jumped nearly 14% after the online furniture and home furnishings retailer gave investors a favorable financial report. Sales in the first quarter of 2018 climbed by nearly half compared to the prior-year period, and shareholders were generally willing to ignore losses that nearly doubled from what Wayfair had posted a year ago. Although some have been nervous about the potential for Wayfair to see slowing future growth, guidance from the company for the second quarter still showed top line growth exceeding 40%. The big question is whether Wayfair can eventually make the transition to consistent profitability, but for now, shareholders don't seem to care whether that happens in the near future.

Finally, shares of Frontier Communications soared 27%. The telecom company saw revenue ease downward by 1%, but investors were pleased that most of the decline came not from its direct services revenue but rather from subsidies and other regulatory sources. Video services sales fell about 10% as customers kept cutting the cord, but gains in voice and in data and internet helped to keep Frontier moving in the right direction. CEO Dan McCarthy pointed to improving trends in the key markets of California, Florida, and Texas, where Frontier made its most recent acquisition. Many investors are still shell-shocked by Frontier's decision to eliminate its dividend, but signs of potential improvement in the telecom's fundamental performance bode well for Frontier's longer-term prospects.