Like him or loathe him, George Soros is a highly successful investor, and looking at the stocks Soros Fund Management LLC is buying and selling is always useful. With that in mind, let's take a look at the worst-performing stocks held by the company in 2016. The idea is that they have the potential to bounce back strongly. 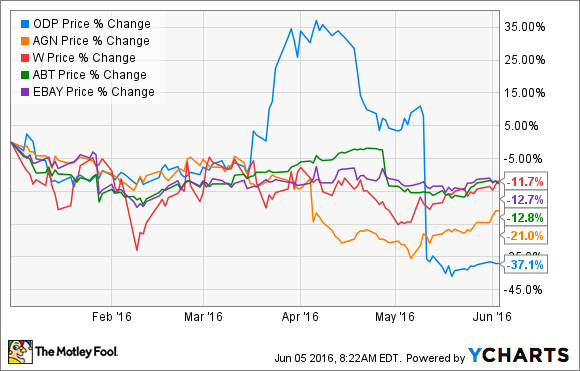 The following companies were picked out using the fund's last 13F SEC filings for 2015 and comparing it to the most recent filing. The stocks discussed had a value of at least $1 million in both filings -- ensuring that they are significant holdings, and ones in which Soros Fund Management still had positions at the time of the most recent filing. I've selected the most interesting among them for investors.

Office Depot (NASDAQ:ODP) is strictly for deep value enthusiasts, but even on that basis it's hard to make a case for buying the stock. In short, revenues and earnings are facing structural challenges from online retailers like Amazon.com (NASDAQ:AMZN). Consequently, lower sales and profits are expected for 2016. Management is reacting by closing stores, but it's hard not to see the company's problems as structural.

Frankly speaking, it's not easy to see where the company goes from here, and its valuation probably isn't compelling enough for most investors. There is $754 million of property and equipment on Office Depot's balance sheet, but its enterprise value (market cap plus net debt) is around $2.6 billion, and the company continues to bleed cash. The stock looks cheap on an EV/EBITDA basis (see table above), but it could get a lot cheaper.

Pfizer or no Pfizer, Allergan plc (NYSE:AGN) has good growth prospects. Exposure to attractive end markets such as aesthetics (Botox), eye care, and Alzheimer's lead analysts to pencil in double-digit revenue and earnings growth for the next few years. Moreover, highly rated billionaire investor Carl Icahn has taken a stake and backed the company's management.

Frankly, of all the companies on the list, Allergan stands out as not having disappointed operationally in 2016 -- there is little management could do about the failure of the Pfizer deal. On this basis, it's arguably the most interesting company discussed, but also the second most expensive.

The honor of the most expensive stock on the list is held by home goods e-commerce retailer Wayfair, Inc. (NYSE:W). As ever with high-growth stocks not currently generating earnings or cash flow, the stock price is likely to be highly volatile as the market decides whether the company can grow into its valuation. Throw in the ever-present fear that Amazon's expansion into home goods will reduce Wayfair's future growth rate and you have the recipe for a volatile stock. The good news is that the latest results proved the bears wrong with the company reporting a 76% increase in revenue while increasing average order value by $32 to $238. The stock is worth a closer look.

It's fair to say that Abbot Laboratories' (NYSE:ABT) year will be defined by its acquisitions integrations. In February, Abbott announced a $5.8 billion deal to buy diagnostics company Alere; however, the deal has hardly gone smoothly. In April, Alere released a statement claiming Abbott had requested to cancel the deal citing concerns about Alere's financial statements. It's subsequently come out that Alere is being probed for bribery overseas.

Meanwhile, Abbott has agreed to buy heart-device maker St. Jude Medical for $25 billion. Clearly, Abbott Laboratories has its hands full with these acquisitions, and any strong position on the stock is going to require an informed view of likely outcomes -- very hard for private investors to have.

In contrast with Wayfair, eBay Inc. (NASDAQ:EBAY) has already had the fast growth period in its company life and is now a company settling into "middle-aged" cash cow phase. Its valuation (see table above) is reflective of its current low single-digit growth trajectory (revenue grew just 3.7% in the first quarter). That said, the company remains a prodigious cash generator with $483 million in free cash flow generated in the first quarter alone -- when annualized, this equates to around $2 billion, or 7% of the current enterprise value.

Whichever way you look at it, eBay is not an expensive stock, and if management can succeed with implementing its structured data initiative -- a move to better catalog its inventory so products will be more easily found by search-engine algorithms -- then revenue growth can receive a boost. Of course, there is no guarantee that the initiative will work out, but on a risk-reward basis, eBay looks attractive.

For most private investors following Soros Fund Management, Allergan and eBay are the most interesting stocks to monitor. Wayfair is interesting as part of a growth-based portfolio, but it's likely to be volatile. Office Depot is a structurally challenged business, and the key drivers of Abbott Laboratories' stock price are likely to be better known by people closer to the acquisitions process.