What: Shares of TransEnterix (NYSEMKT:ASXC), a small-cap medical device company focused on robotic surgery, surged 22% higher in May, according to data from S&P Global Market Intelligence. 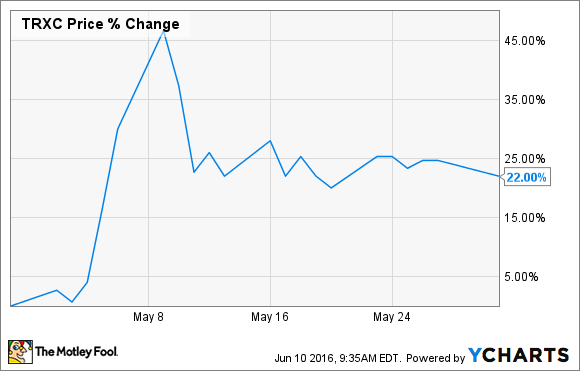 So what: The company's stock really shot up at the start of the month, but there wasn't a lot of news at the time that can explain such a big rise. Perhaps investors were anticipating good news on the company's earnings call and were building a position ahead of time. It's also possible that short-sellers were in profit-taking mode after the stock's plunge in April on the news that the FDA had rejected its 510(k) submission for its SurgiBot System.

Regardless, shares spiked to start out the month, but then fell in the wake of the company's first-quarter earnings report. TransEnterix showed a comprehensive loss of $9.1 million for the quarter, but if you adjust for taxes and currency movements, the loss would have ballooned to $14.9 million.

Financials aside, the reason that the stock fell was most likely because the company announced that it would be shifting its focus away from the SurgiBot system and would instead put all of its efforts behind the ALF-X system. Management stated that the company was letting go of some of its SurgiBot staff in an effort to save money, and that it remained on track to have the ALF-X system in the FDA's hands before the end of the year.

This news represents a major strategy shift for the company and likely took many investors by surprise. After all, the major bull case for owning TransEnterix's stock was that its SurgiBot system offered hospitals an equally capable robotic surgery system for a much lower upfront cost than the market leader, Intuitive Surgical's (NASDAQ:ISRG) da Vinci Surgical System. Right now it's unclear if the company's ALF-X system holds the same kind of appeal, especially since the system has been available in Europe for several years and has failed to gain mass adoption.

Still, even with shares taking a step back after the announced strategy change, the company's stock managed to produce an impressive gain during May. Of course, the picture doesn't look quite as rosy if you look at the year-to-date results. 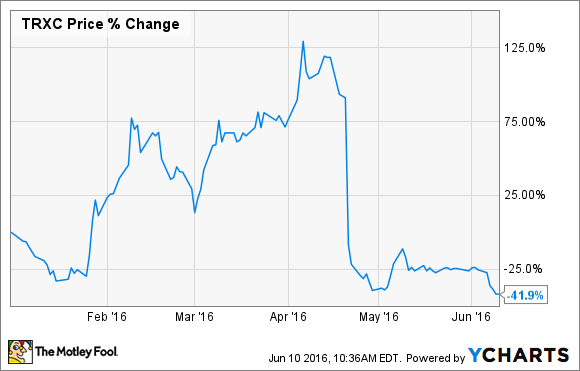 Now what: Despite the setback, TransEnterix continues to move forward, and it recently announced a big hire. Dr. Theodore Pappas has joined the company as its new senior surgical officer. Dr. Pappas is an accomplished surgeon from the Duke University Health System with over 30 years of surgical experience under his belt. He has also co-authored hundreds of peer-reviewed papers and mentored hundreds of surgeons, so hiring Dr. Pappas is likely to be a big win for the company. His role within TransEnterix will be centered on developing a future clinical and regulatory strategy.

I think this was a smart hire, and it lends the company a lot of credibility, but even with a renowned expert on staff, the company is still facing an enormous uphill battle. After all, Intuitive Surgical isn't exactly standing still, and it's had no problem competing against the ALF-X system thus far.

During TransEnterix's conference call with investors, CEO Todd Pope also gave investors a look at just how far Intuitive Surgical is willing to go to maintain its dominant market position:

We have, however, been somewhat surprised by the competitive response, which has included withdrawing their high-end platform and substituting refurbished older technology at a highly discounted price.

If Intuitive Surgical is offering refurbished systems at a low price point, then TransEnterix is likely to have an extremely hard time selling its ALF-X system. After all, Intuitive Surgical is already highly profitable, and it has more than $3.8 billion in cash on its books, so it can easily afford to sell its used systems at a big discount. That's especially true when you consider that the majority of its revenue comes from its high-margin disposable instruments and service contracts business, so giving a discount on the system's price makes a lot of sense in order to lock up customers.

TransEnterix, on the other hand, cannot say the same. A recent share offering has pushed the company's cash balance to about $75 million as of the end of April, but that will only be enough capital to fund operations through the third quarter of 2017. Intuitive can easily afford to keep the pricing pressure up until then.

Now that all of TransEnterix's eggs are in the ALF-X basket, I personally have a hard time believing that this company has a realistic chance of success. While this is a fascinating story to watch unfold, until we see the company make meaningful financial progress, I think that skepticism from potential investors is warranted. For that reason, I continue to believe that investing in Intuitive Surgical is the far smarter way to play the robotic surgery trend.