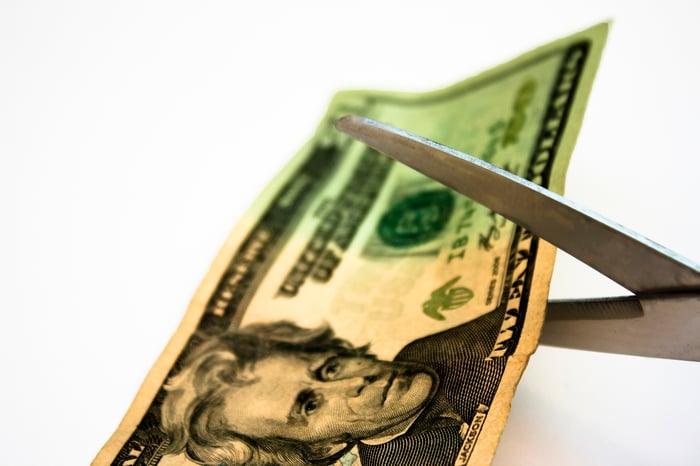 In a perfect world, a dividend-paying stock would not only maintain its payout but grow it for decades to come. Unfortunately, that's not always the case, with some companies forced to reduce dividends amid weakening market conditions. Over the past year, this has certainly been the case for the energy sector, which has seen its share of dividend reductions and suspensions. More payout reductions are likely on the way because a number of energy companies have what amount to embarrassingly unsustainable payouts. Here are three dividend stocks that seem destined to cut their payouts in the future.

The clock is ticking on this dividend

Royalty trust BP Prudhoe Bay Royalty Trust (NYSE:BPT) has also been up front that its dividend payments aren't sustainable. BP Prudhoe Bay Royalty Trust's trustee alerted investors in the Trust's most recent annual report that "royalty payments to the Trust will continue through the year 2020, and would be zero in the following year." That's much sooner than previous estimates, which projected that the trust's income stream wouldn't run out until 2029.

This change is due solely to the volatile price of crude oil, with last year's report based on oil averaging $50 a barrel versus much higher oil prices in previous years. This does leave the possibility that the trust's income stream might continue past this decade if oil prices return to previous levels. There's even a possibility that the trust's dividend could rise in the near term thanks to the recent recovery of oil prices. Long-term investors, however, will likely be disappointed by this oil-fueled dividend because it will run out at some point in the future.

Oil pipeline company Plains All American Pipeline Partners (NASDAQ:PAA) is in a similar boat with Williams Partners. Its exposure to commodity prices cut into its cash flow, which caused its distribution coverage ratio to fall below 1.0 times last year. The coverage ratio is expected to remain below that key level again this year due to persistently weak market conditions.

This is a problem that Plains All American Pipeline readily admits. At the company's last analyst day, CFO Al Swanson said that "we recognize that [a] sub one-to-one coverage for [an] MLP is not sustainable or really not an acceptable practice over the long-term." He also noted that the company was committed to returning the payout to a sustainable level. That commitment to improve could include a range of options, such as merging with its own general partner and/or reducing its distribution. Either way, the payout clearly isn't sustainable right now and won't be unless the company takes drastic action.