Just because a company isn't profitable doesn't mean one should dismiss it as an unworthy investment. A well-run business is well worth a long-term commitment, holding shares for several years -- if need be -- until it can sustain profitability. Granted, such a commitment entails more risk, but with great risk comes great reward.

Let's consider one unprofitable company, Plug Power (NASDAQ:PLUG), which has fallen far out of favor among investors over the past few years. During a week in mid-March 2014, the company averaged a daily trading volume of 160.3 million shares, but during the second week of June this year, it averaged a daily trading volume of just 1.5 million shares.

Many investors have lost faith in the company's promise of a hydrogen-filled future, but sometimes, the most profitable investments are those made in opposition to the flock, so let's dig a little deeper.

Investors could tolerate Plug Power's continuous reporting of losses if they were confident the company was under quality stewardship. One way to judge this is by evaluating management's guidance -- remaining immune to any quixotic visions of future performance and sticking solely to the numbers. Unfortunately, in doing this, we find a red flag flapping furiously in the wind.

Making a similar claim during an investor presentation this past January, Marsh predicted the company will achieve break even on an EBITDA basis by the end of 2016 -- a feat it will accomplish while limiting its operating expenses to under $20 million.

You'd think Marsh would be a little more circumspect about issuing such bold guidance. Surprisingly, though, he's not. And it's even more surprising when you consider the company's 2015 performance: an EBITDA loss of $52 million and operating expenses of $49 million.

Although Plug Power continues to report losses, it could be forgiven if investors trusted that management was effectively using the tools at its disposal, but again, we find this a little lacking. Plug Power has raised substantial equity from 2013 to the end of 2015 -- the share count grew from 73 million to 176 million -- but the company hasn't been able to make increasingly good use of it; returns on both invested capital and equity are worse than 40% below zero. 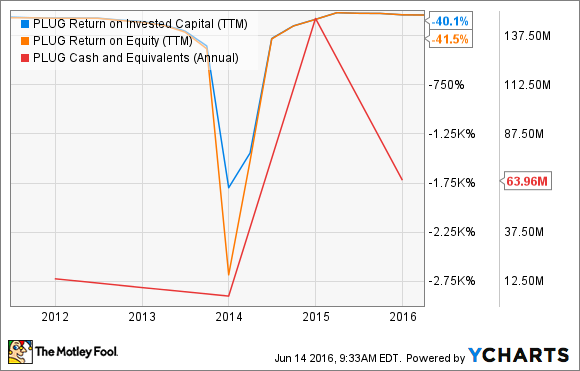 Though management has emphatically stated it doesn't foresee raising equity in 2016, odds are that it's coming in 2017. Having already suffered from dilution in the past few years, investors should be wary of management raising more equity since there's no indication it can make good use of it.

Despite some signs the company is moving in the right direction, investors aren't inspired; shares are down more than 32% since this time last year. Of course, this alone doesn't suggest a buying opportunity. Since the company is unprofitable, we can't use the traditional price-to-earnings metric to value the shares, so instead, we'll turn to the company's price-to-sales ratio.

From a historical perspective, the company's current valuation at 2.8 times trailing sales may seem compelling; at this time last year, shares were trading at more than six times sales. Looking even further back, we find the company was trading at a whopping price-to-sales multiple as high as 27 about two years ago. But all of this doesn't suggest that the company is attractively priced, rather it indicates shares have been wildly overpriced at numerous times in the past.

In comparison to its closest peer, FuelCell Energy (NASDAQ:FCEL), which also deals in fuel cells and is not EBITDA-positive, Plug Power's stock currently seems expensive: FuelCell Energy trades for less than 1.0 times sales. 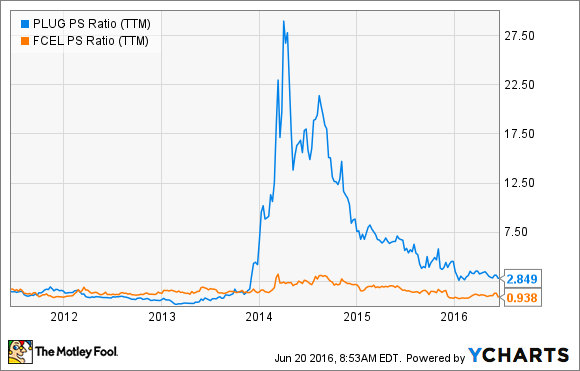 Furthermore, history shows that the two companies -- absent of investors' enthusiasm two years ago -- usually trade around the same multiple, so it's likely Plug Power's shares will continue to fall.

Investing in a company with a high price-to-sales ratio is not always a bad thing. If the company's revenue translates to strong operational cash flow or consistently growing EBITDA -- even if it's negative -- a high P/S multiple may be worth it. Plug Power's revenue growth is impressive -- it's up 268% from fiscal year 2011 to fiscal year 2015 -- but it's all for naught if the company can't reduce expenses enough to make the rising sales meaningful.

Lack of confidence in management and a high valuation are just some of the reasons electrifying one's portfolio with Plug Power isn't a great idea. Like the heavy reliance on individual customers, such as Wal-Mart, there are serious risks that make an investment here a little too speculative. Should the company's performance improve to the degree management is suggesting, though, it will be well worth the energy -- hydrogen or otherwise -- to pay the stock another visit.