Please ensure Javascript is enabled for purposes of website accessibility
Log In Help Join The Motley Fool
Free Article Join Over 1 Million Premium Members And Get More In-Depth Stock Guidance and Research
By Travis Hoium - Jun 23, 2016 at 9:16AM

Could Elon Musk be using one of the two public companies he controls to bail out the other?

When a billionaire like Elon Musk makes a move to merge two public companies he controls -- as CEO of Tesla Motors Inc (TSLA 5.01%) and chairman of the board of SolarCity Corp (SCTY.DL) -- you have to wonder if there are ulterior motives. SolarCity has struggled for most of the past year with changing customer demands in the solar market, and the costs associated with selling on a national scale. So Tesla swooping in to buy it seems like a nice bailout for the solar company.

Should investors be concerned that Elon Musk is saving one company with another in a move that could be considered a bailout?

If you look at the stock chart for SolarCity for the past two years, you can see why it might be looking for alternatives. But it's on the operational side that SolarCity is really looking for salvation from its current woes. 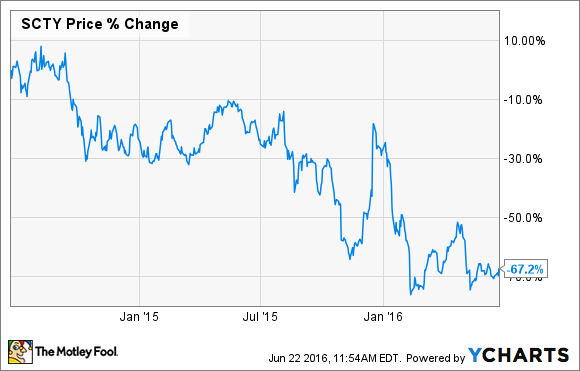 Through the end of 2015, there was a lot of urgency for customers to go solar, and the industry was just building out the infrastructure to serve those customers effectively. SolarCity was able to grow its footprint, lower costs, and sign up hundreds of thousands of customers in the process.

But late last year, the solar investment tax credit was extended, and some of the urgency to go solar in 2016 disappeared. Combine that with negative rulings against solar in Nevada, and you have an industry that's seeing less growth than it's seen in a decade. SolarCity, Vivint Solar (NYSE: VSLR), and Sunrun (NASDAQ: RUN), which command the biggest share of the residential solar market, have seen costs shoot higher as growth has slowed. And that's just part of the problem.

Worse yet is that companies and banks that finance solar systems have begun to question if the assumptions they've been using were too optimistic. Are customers really going to pay solar energy bills for 20 years? Will homeowners who sell their homes be able to transfer leases 10 or 15 years after the initial contract is signed? With loans proving to give customers more cost savings and flexibility, will default rates on old leases grow in the future?

As these questions pop up, borrowing costs to fund solar power systems are on the rise. And that's hurt SolarCity's value proposition for investors. And as SolarCity grew, it needed more and more debt, so the rising cost was a huge detriment to the business. A buyout by Tesla Motors probably looks good given the challenges SolarCity sees ahead.

If SolarCity was looking for alternatives, Tesla is the obvious buyer -- and maybe the only one. The companies are working together on energy storage, and solar definitely plays into Musk's long-term vision.

But after SunEdison's disastrous pursuit of Vivint Solar, which ended in SunEdison filing for bankruptcy, there likely weren't many other suitors for SolarCity. There are billions of dollars in financing needed to build solar systems, and that presents problems for any potential buyer. Elon Musk and Tesla seem to be able to gloss over those financing challenges for now.

Does SolarCity need a bailout from Tesla Motors?

The bigger question for SolarCity is why it would need to be acquired in the first place. If management really thinks the company will be cash-flow positive by the end of the year, and sticks to its target of installing more than 1 GW of solar, why sell out at a depressed stock price? If they had confidence in the business, wouldn't it be better to stay independent, and reap the rewards of that upside?

The obvious answer is that SolarCity doesn't see a bright future without the Tesla Motors deal, or CEO Lyndon Rive would have rebuffed the offer immediately. But that didn't happen, and that's what I find so curious.

Maybe SolarCity was in need of a bailout more than investors thought, and Tesla has come to the rescue. If that's the case, it could be a terrible merger for Tesla if SolarCity was in such dire straits in the first place. And it could destroy a lot of shareholder value -- which is why it should be on investors' minds today.

In the end, Tesla and SolarCity investors will be able to vote for or against this deal. And given the difference of opinions about how SolarCity and Tesla will work together, maybe they'll strike down Elon Musk's vision of a vertically integrated renewable energy company before it can come to pass.