What: Shares of memory-chip manufacturer Micron Technology (NASDAQ:MU) jumped on Thursday, with two analyst upgrades driving the stock higher. Micron stock was up 10% at 3:15 p.m. EDT.

So what: Micron has been suffering from weak DRAM prices in recent quarters, driven by oversupply in the DRAM market. This caused Micron to report a 30% year-over-year drop in revenue, and a net loss during the second quarter. But DRAM prices appear to be on the rebound, and a few analysts have changed their tunes on the company.

On Wednesday, Romit Shah of Nomura upgraded Micron stock to buy, boosting his price target to $18.00 from a previous target of just $8.00. Another analyst followed suit on Thursday, with Susquehanna upgrading the stock to positive, and raising its price target to $18.00 from $10.00. According to Shah, evidence of DRAM supply shortages began to appear during the past few weeks, driving up prices in the process.

Following Thursday's jump, shares of Micron are now up about 50% from their 52-week low. The stock is still well below highs reached in late 2014. 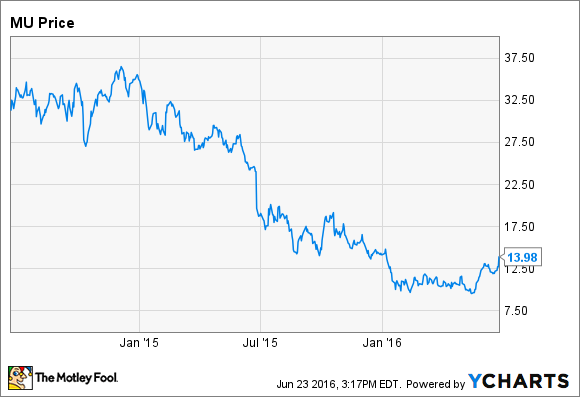 Now what: Micron will report its third-quarter results after the market close on June 30, and the company's outlook for the fourth quarter could confirm what analysts are seeing in the DRAM market. If that's the case, the third quarter may end up marking the bottom for both Micron and the DRAM market.