What: Shares of Keryx Biopharmaceuticals (NASDAQ:KERX), a commercial-stage biotech focused on chronic kidney diseases, are off to a great start to the year, gaining more than 19% year to date, according to data from S&P Global Market Intelligence. That blows past the returns of the healthcare sector in general as measured by the Vanguard Health Care ETF. 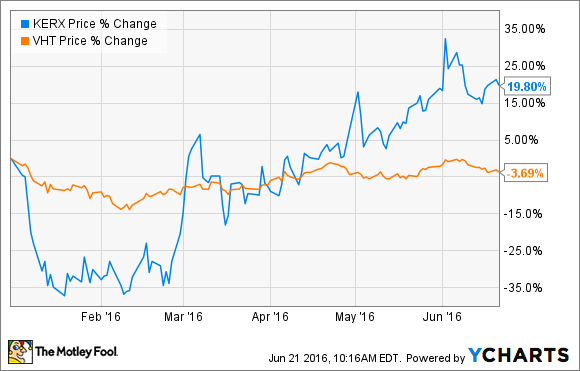 So what: A handful of positive news developments appear to be the primary reason that shares have soared. Highlights from the first six months of the year include:

Given that shares of Keryx have collapsed over the past two years, perhaps it's not surprising to see that the stock has slowly started to recover as the company released a steady schedule of positive news.

Now what: For the full year, Keryx's management team believes that total U.S. sales of Auryxia will come in between $31 million and $34 million. When adding in the small additional revenue contribution from Auryxia's sales in Japan, the company should easily more than double its sales this year.

However, the company plans to continue to spend heavily on the promotion of Auryxia, so it should still show a huge net loss for the year. That's OK, as its cash hoard stood at more than $170 million at quarter-end, so there's little risk of the company reaching out to shareholders for more capital.

The positive clinical news is also encouraging, as winning a label expansion claim for Auryxia could go a long way toward expanding the company's addressable market. Its current indication can be used on about 450,000 patients in the U.S., but adding patients who are not dialysis-dependent to the mix could push that number to over 2 million.

The only real negative that we have heard so far this year from Keryx is that it's having a hard time finding a European partner. That owes to the fact that generic versions of Renvela -- Sanofi's drug used to control chronic kidney disease that is a major competitor of Auryxia -- are creating pricing uncertainty throughout the region, causing many would-be partners to remain on the sidelines. That's an unfortunate reality that investors will need to factor into any potential investment decision in this company.