What: It's been a wild year for shareholders of Acadia Pharmaceuticals (NASDAQ:ACAD), a commercial-stage biopharma focused on diseases of the central nervous system. Shares plunged more than 50% from Jan. 1 through the middle of March, but they've come roaring back to life in recent months, and were even up more than 15% at the high point. They are currently down 15% since the start of the year. 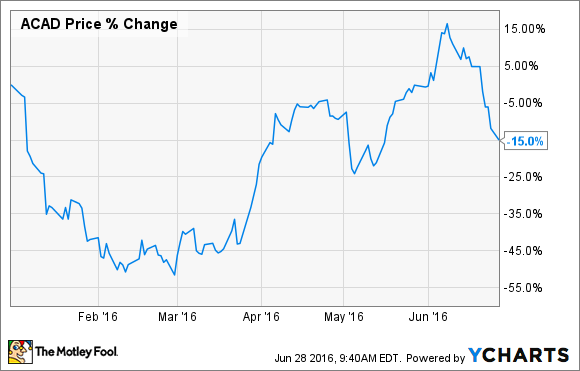 So what: What caused the plunge and the follow-on recovery? Here's a review of the key developments that have taken place this year:

Now what: AstraZeneca is facing some big revenue challenges over the next few years (which is a big reason it has become one of the highest-yielding big pharma stocks out there), so it's not out of the question that a bid may ultimately surface for Acadia. After all, AstraZeneca does have a recent history of buying small biopharma companies, especially those close to launching interesting new drugs. Last year, the company spent $2.7 billion to buy out ZS Pharma to get its hands on the company's treatment for hyperkalemia. However, that move isn't looking so great in hindsight, so it's possible the management team is feeling a bit gun-shy now.

Even if a buyout offer doesn't surface, there are plenty of reasons to be bullish on Acadia's stock right now. The National Parkinson Foundation estimates that 1 million people in the U.S. alone suffer from Parkinson's disease, and roughly 40% of them develop psychosis. Because there are no other approved treatment options on the market, Acadia should have this indication all to itself, which is why some analysts believe peak sales of Nuplazid could eclipse $4 billion in time.

If Acadia can execute on that huge market opportunity -- which is a big "if" -- then today's market capitalization of roughly $3.5 billion might seem like a great entry point in retrospect. Investors with an above-average tolerance for risk might want to give this company's stock a closer look.