FuelCell Energy (NASDAQ:FCEL), for nearly 25 years, has been working to make fuel cell technology a fixture on America's energy landscape. That's no small task. And the company has yet to prove that it can be a lucrative endeavor. Be that as it may, it continues to charge ahead.

The main driver of FuelCell's business is its Direct FuelCell (DFC) power plant, which uses carbonate fuel cell technology -- a technology best suited for utility-scale applications. According to management, the company retains an advantage because it is the only domestic company dealing in significant manufacturing of carbonate fuel cells. Nonetheless, FuelCell faces plenty of adversity. Let's look at some of the competition standing in its way.

Bloom Energy, unlike FuelCell, is a privately held company that utilizes solid oxide fuel cell (SOFC) technology in its stationary power solution. Providing about 200 kW of power each, the Bloom Energy Server is modular, affording customers the ability to increase the power output as needed.

Bloom Energy doesn't primarily seek adoption in large utility-scale projects, but it is forging relations with some of the nation's largest utility companies and stealing market share form FuelCell. In 2015, Bloom Energy announced a partnership with Constellation, a subsidiary of Exelon (NASDAQ:EXC), in which the two companies would develop 40 MW of fuel cell projects for commercial and public-sector customers in California, Connecticut, New Jersey, and New York. The deal follows a previous one announced in 2014: Exelon's equity investment in 21 megawatts of Bloom Energy Servers.

Though it's not likely to appear in large applications like the 14.9 MW facility developed by FuelCell and Dominion, one of the nation's largest utilities, Bloom Energy can serve FuelCell a death by a thousand cuts.

In a report examining the state of the fuel cell market, the Energy Department identified 13.7 MW of stationary power projects announced in 2015. Of those, Bloom Energy accounted for 16 projects in the 200 kW to 1.4 MW range; FuelCell accounted for only five projects. Clearly, Bloom Energy represents significant competition in this smaller range and has the potential to do the same in larger applications.

Competition on the horizon

FuelCell contends that one of its most purposeful applications is in cogeneration projects. Also known as combined heat and power (CHP), these facilities produce electricity, collect the excess generated heat, and use it simultaneously for heating and cooling applications. Considered one of the most energy-efficient methods for power generation, cogeneration provides other benefits, which make it attractive for states seeking compliance with increasingly stringent environmental regulations.

General Electric (NYSE:GE), a behemoth in the power industry, includes CHP solutions -- without fuel cell components -- among its offerings. And although GE doesn't currently represent direct competition in the fuel cell market, FuelCell recognizes the company as a potential source of competition as it pursues research in SOFC technology. 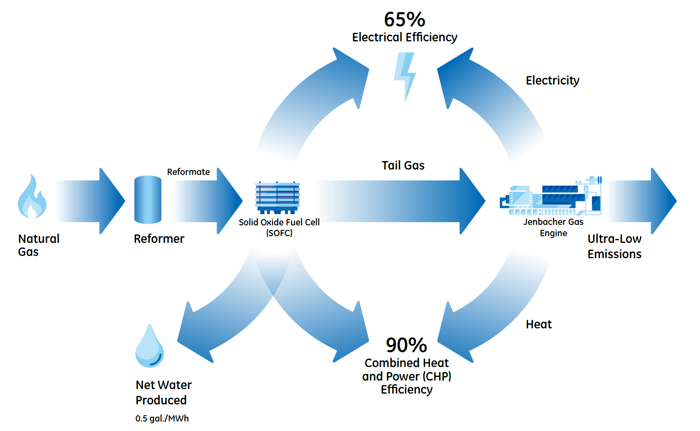 Upon successful development of its demonstration system, GE intends to scale it up to the 10 MW range. If and when it accomplishes this, GE will emerge as one of FuelCell's most formidable competitors. For one, GE will compete with FuelCell on the quality of its product since GE appears to have achieved greater electrical efficiency. Also, GE's economies of scale will dwarf FuelCell's capabilities, affording GE the ability to exert significant pricing pressure on FuelCell.

Another top dog in the industry

FuelCell doesn't count just its fuel cell peers as competitors; it also identifies companies dealing in traditional power generation equipment. In this regard, Caterpillar (NYSE:CAT), similarly to GE, represents significant competition. With $47 billion in revenue for 2015, Caterpillar is a global leader in manufacturing diesel and gas engines as well as industrial gas turbines -- all sources of competition for FuelCell.

Solely in terms of its cogeneration solutions, Caterpillar is a fierce adversary. It uses pipeline natural gas to supply electricity and heating to various industrial facilities, such as manufacturing plants, refineries, and regional district heating plants. In addition, Caterpillar can provide its CHP solutions to commercial facilities such as universities, data centers, and hospitals.

This past April, the company announced the launch of its microgrid solution, which leverages its traditional power generation equipment, solar power, and energy storage. A burgeoning market, fuel cells are frequently considered in microgrid applications.

According to a report from Navigant Research earlier this year, the global microgrid market is expected to grow from 1.4 GW in 2015 to 7.6 GW in 2024, suggesting there's plenty of opportunity for FuelCell to gain market share. But with industry stalwarts like Caterpillar also vying for share, FuelCell's task is exceedingly onerous.

The growing adoption of solar and wind power suggests that there is a paradigm shift under way. Surely this provides hope for FuelCell Energy -- another alternative power provider. But the company's success doesn't just rely on changing its prospective customers' attitudes. There are industry giants looking to do the same. And, unlike FuelCell, they're much better equipped to withstand the fits and starts of the nascent industry.