Investment decisiones should be based on future potential, not past dividend growth. 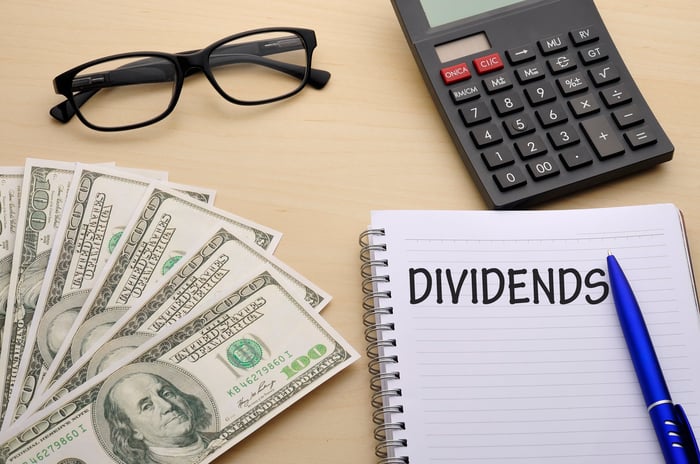 Dividend aristocrats are among the most respected stocks in the market. Among other requirements, dividend aristocrats are companies that have proven their financial quality by raising their dividends over 25 consecutive years or more. It takes a solid business to sustain growing dividends over the long term, but investment decisions should be based on forward-looking considerations, not past performance.

Tyler Crowe: Investing in a dividend aristocrat is typically based on the premise that a company has generated great returns over the long term. If you are looking for that kind of stability, you might be able to forgive a company if it doesn't exactly keep pace with the S&P 500 on a total return basis. Looking at agriculture giant Archer Daniels Midland (ADM -0.83%), though, it's awfully hard to see why an investor would be willing to tolerate that amount of underperformance just for the comfort of a constantly growing dividend. 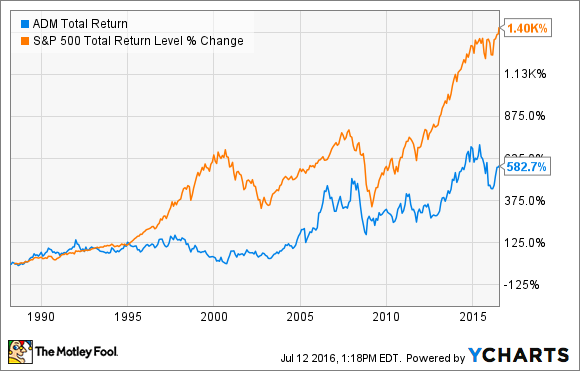 On the surface, Archer Daniels Midland checks all the boxes that would lead to spectacular returns. It has raised its dividend every year for 40 years and has bought back about a quarter of its shares outstanding over the past 25 years. There are two reasons that the company probably hasn't been that great of a long-term investment compared to other dividend aristocrats. One is that the company's return on invested capital has mostly been in the low single digits for the better part of the past 20 years. That's just the way it is when you are in a commoditized business like food processing, where there isn't a whole lot of pricing power.

Then there is the matter that all of those dividend raises have been rather modest, and the yield is quite low. Today, the stock trades at a dividend yield of 2.7%, which is close to the highest it has ever traded at. Today's yield might look appealing, but yield for Archer Daniels Midland has been tepid for so many years that the company hasn't been a great dividend aristocrat investment.

Andres Cardenal: AT&T (T -0.93%) is a top player among telecom operators, an industry which is going through major challenges. Internet and related technologies are aggressively reducing communication costs across the board, which is putting substantial pressure on prices and profit margins in the sector. With the acquisition of DIRECTV, AT&T has also gained sizable exposure to the pay-TV industry, and this business could face a considerable threat due to growing demand for online video streaming services in the middle term.

AT&T has increased its dividends in the last 32 consecutive years, and the stock is paying a dividend yield of 4.5% at current prices. This is materially higher than the average dividend yield of 2.5% for companies in the S&P 500 index, so the yield is quite attractive, especially in times of historically low interest rates.

However, dividend growth has been under pressure lately, and it will probably remain subdued over the coming years. The company has raised its quarterly dividend per share by $0.01 per year since 2008; this translates to a modest dividend increase of 2.1% for 2016.

AT&T is on the wrong side of major technological trends, and this means that the company will probably need to protect financial resources as opposed to aggressively distributing cash to investors in the form of dividends. The dividend yield is quite tempting, but investors would be better advised to focus on companies with superior potential for growth going forward.

AbbVie: not your typical dividend aristocrat

George Budwell: Dividend aristocrats tend to have noteworthy free cash flows that have stood the test of time. After all, companies have to post 25 consecutive years of dividend increases to even make this elite list. The Illinois-based drugmaker AbbVie (ABBV 0.36%), though, was able to piggyback on the success of its former parent company, Abbott Laboratories, to find a home on this closely watched list of top dividend stocks.

While AbbVie's unusual path toward becoming a dividend aristocrat shouldn't necessarily ring alarm bells, the fact that 60% of the company's net revenue currently stems from a single product -- the anti-inflammatory drug Humira -- is cause for concern. The long and short of it is that Humira is set to go off patent at the end of this year, and there's no guarantee that AbbVie's broader patent portfolio will keep biosimilar competition at bay for an extended period of time.

Complicating matters further, AstraZeneca (AZN 0.47%) and Gilead Sciences (GILD 1.91%) are both developing drugs to compete directly against AbbVie's blood cancer drug Imbruvica. In fact, Astra's experimental drug acalabrutinib has the potential to make a major dent in Imbruvica's market share down the line, as it's specifically designed to be more potent and safer. That's certainly not welcome news for AbbVie shareholders, given that Imbruvica is expected to eventually take the reins from Humira as the company's flagship product.

All told, income-seeking investors are probably best served by shying away from AbbVie, at least until the company's intellectual property strategy surrounding Humira has been put to the test.