The wearable computing veteran is measured against crazy growth standards right now. Even so, the company could fill those huge shoes with a wave of new products.

That's certainly true for wearable computing pioneer Fitbit (FIT). 21% of the stock's shares are currently sold short, setting a record for Fitbit's young corporate life. Meanwhile, early pessimists have been cashing in. Fitbit shares are trading more than 50% below their IPO price from last summer.

Fitbit hit the market at a premium valuation. Shares traded at a pricey 70 times trailing free cash flows at first. That ratio has dwindled all the way to 16 today. Are short-sellers right to double down on their negative Fitbit bets, or is the stock poised to hurt them with a strong bounce? 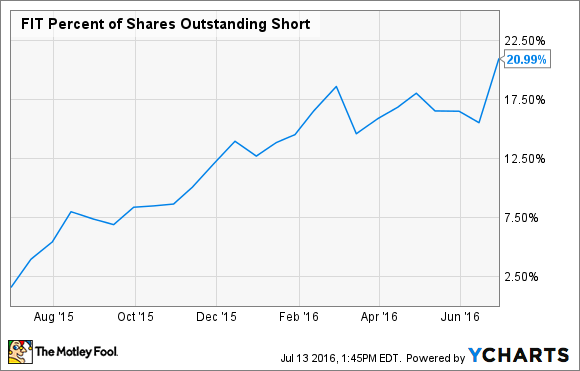 Before hitting the public stock market, Fitbit was enjoying fantastic annual revenue growth. I mean, the kind that only microcap upstarts can produce. In early 2014, sales were more than tripling year over year. By the June IPO, Fitbit's annual revenue growth had already cooled down to 175%.

The irony of this so-called weakness should be obvious. Many CEOs would sell their favorite golf clubs for a shot at 149% sales growth. Then again, those executives are already shepherding far larger revenue streams that would be very difficult to double or triple in a year. Fitbit's annual sales stand at a modest $2 billion so far, leaving lots of room for further growth of the steroid-boosted kind.

Many of Fitbit's critics worry that the wearable computing trend will turn out to be a flash in the pan. Others think that different companies will dominate the market space that this company has carved out for itself. If the wearables market becomes saturated, one or both of these doomsday scenarios could very well play out. That's why share prices have been swooning, and why the army of short-sellers only keeps growing larger.

Rick recently underscored the upcoming arrival of a whole new generation of Fitbit products, on top of strong sales to corporate clients. Together, these two phenomena should keep Fitbit's sales ticking higher for some time yet. All told, he expects the stock to bounce back as the new products roll out.

Likewise, Demetrios points to the new product generation as a Fitbit's saving grace. This is the time to shape and define the wearables market with a steady stream of fresh innovation, and Fitbit is doing a good job of this.

If Rick and Demetrios are right (and I think that they are), Fitbit's many detractors and short-selling investors could be in for a world of hurt in the next few quarters. Remember, just climbing back to the midpoint of the last 52 weeks' share price range would amount to more than a triple. This looks like an epic short squeeze in the making.

Anders Bylund has no position in any stocks mentioned. The Motley Fool recommends Fitbit.