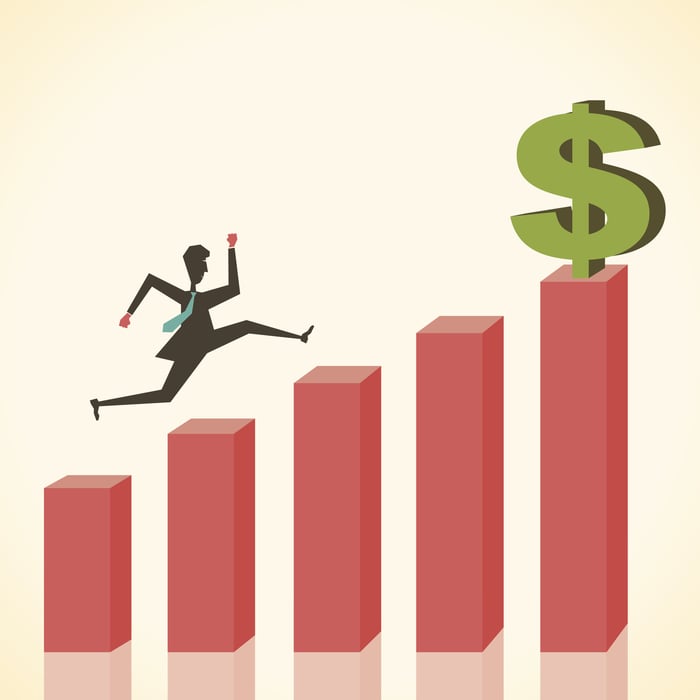 "Past performance," the experts tell us, "is no guarantee of future success." But life is generally short on guarantees in any case. The most any investor can hope for is a few clues along the way.

In the absence of a crystal ball, I can't think of any better clue how a company will perform in the future than how it's shown itself able to perform in the past. So if I'm asked which companies are likely to double their sales next year, the first thing I want to know is which companies have proven their ability to double their sales -- consistently -- in the past.

And this is where a screener comes in handy.

Using Finiz.com's excellent, free screening program, I quickly pulled together a list of no fewer than 57 companies that have averaged roughly 100% sales growth annually over the last five years.

Granted, most of these companies are names you've never heard of before -- speculative microcap names with stocks priced in the pennies, like Quest Resource Holding Corporation, Northwest Biotherapeutics, PEDEVCO Corp, and the like. Companies that, as a general rule, I'd advise any investor to be very careful about investing in, and only to buy after doing substantial due diligence beforehand.

On the other hand, though, the list of 100% growers includes quite a few more recognizable names -- including the three that we'll look at today.

Let's start with Workday (NASDAQ:WDAY), the cloud computing human resources software company. Valued at $15.3 billion, Workday is no fly-by-night penny stock operation but a major software provider that did $788 million in sales last year. Over the past five years, Workday has grown its sales at an average of more than 175% annually, and next year it's expected to generate sales more than twice what it collected last year -- $1.56 billion, according to analysts surveyed by S&P Global Market Intelligence.

A second big name that you'll surely recognize is Tesla Motors (NASDAQ:TSLA), the electric car company run by tech billionaire Elon Musk. Tesla's only been in business for a little over a decade, but as you can probably imagine, selling luxury cars at more than $100,000 a pop is a great way to grow sales quickly. It's also a path to sales success that Musk has capitalized on.

Over the past five years, Tesla's sales have averaged a growth rate of 103% per year, hitting $5.3 billion in 2015. Analysts who follow the company expect to see that number double again to $11.7 billion.

One somewhat more esoteric name that popped up on Finviz's screen -- but a name that will be immediately familiar to anyone who follows the Chinese stock market -- is Qihoo 360 (NYSE:QIHU.DL). Often ridiculed as a low-rent version of Baidu.com (which has in turn been derided as a Chinese knockoff of Google), Qihoo has come into its own of late, outgrowing its archrival and posting compound sales growth of 99.1% over the past five years.

Okay, so I bent the rules a bit to call Qihoo a "100% grower." But at least Qihoo is maintaining its momentum. Last year, Qihoo tipped the scales at $1.8 billion in sales, and next year, it's expected to generate sales more than twice that number -- $3.7 billion, according to analysts polled by S&P Global.

Sales growth is a great thing, but it's not everything

Each of these companies has been growing at 100% (or near enough) for years. Each is expected to post superb sales growth next year as well. But assuming they do, is that fact alone reason to buy these three stocks?

Not necessarily. You see, anyone can grow sales rapidly. The key to successful investing, though, is finding a stock that can grow sales profitably. (The old example of the car salesman who buys cars for $20,000, sells them for $10,000, and promises to "make it up on volume" springs to mind. He'll make a lot of sales and grow revenues nicely for a time... but eventually go bankrupt.) So how do these three stocks stack up in terms of profitable sales growth?

Well, Workday has its work cut out for it. While sales are rising nicely, losses are growing as well. Last year, Workday reported generally accepted accounting principles (GAAP) losses of $248 million. This year, it's expected to lose $290 million, and losses are expected to continue mounting through 2019. Workday isn't expected to turn profitable before 2021 at the earliest.

Tesla, despite all the bad press it's been getting lately, is actually in a slightly better position. While unprofitable today, Tesla is forecast to turn the corner -- and turn in positive profits -- as early as 2018. If analysts are to be believed, those profits will then double in 2019 (to nearly $7 a share) and keep growing steadily from there on out.

Meanwhile, Qihoo 360 sports the shiniest numbers of all. Whereas Tesla sees profitability in the near future, and Workday could become profitable... eventually... Qihoo is already earning its profits today. Last year, Qihoo booked $1.58 per share in profits. It's set to nearly double that number this year, grow profits nearly 70% in 2017, and average 35% annualized earnings growth over the next five years.

In short, if you're screening for great sales growth, it's not too hard to find a few stocks worth considering. But if it's profitable, rapid-fire sales growth you're after, the choices may come down to just one: Qihoo 360.