Two high-performance icons and a family-friendly Ford could be on the chopping block, say these Fools.

Doomed: The powerful Chevrolet SS sedan gets great reviews, but it sells in tiny numbers -- and it's made in an Australian factory that's slated to close soon. Image source: General Motors.

Which car models are likely to get the ax in 2017?

Sometimes, when an automaker plans to discontinue a model, they make it obvious by announcing it -- or by dropping a strong hint: "We're closing the factory that makes it." But other times, it takes some analysis to figure out which cars are likely to go the way of the Edsel and Oldsmobile.

Here are three models that our car-minded Foolish specialists think will disappear in the next year or so.

Daniel Miller: You'll hear plenty of positive descriptions when an automaker tells you all about its vehicles. What you won't hear, most likely, is an oxymoron. And that's what I think of when I talk about Ford Motor Company's (F 1.02%) Flex. It's an oxymoron -- as in, it's a cool-looking station wagon. That's likely a sign, in my opinion, that the Flex's days are numbered.

Furthermore, while sales of the Flex are up 11% during 2016, it has sold fewer than 12,000 units this year through June. Among Ford-brand SUVs, the Flex ranks last in year-to-date sales, even trailing the specialty Police Interceptor Utility -- yeah, exactly. It's not just a bad year, either: Take a look at the Flex's not-so-inspiring sales history. 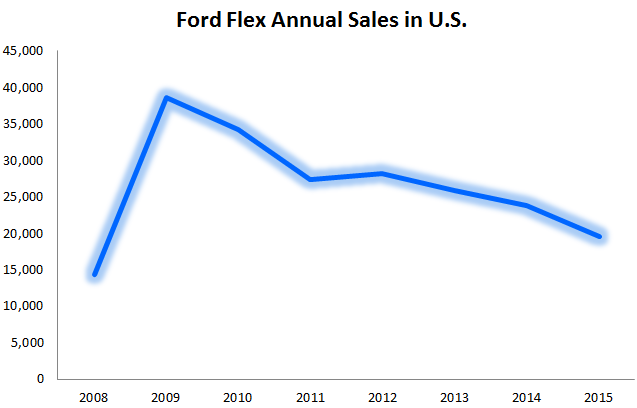 While the Flex doesn't sell well, the Ford Edge and Lincoln MKX sure do. In fact, the Edge has also increased sales 11% this year, except it has sold roughly six times more vehicles in the U.S. market. Lincoln's MKX has even outsold the Flex in volume, at 15,089 units -- which shouldn't happen as a luxury vehicle versus a mainstream vehicle -- and its sales have increased a staggering 72% this year.

Why does that matter? All three of those vehicles are manufactured at the Oakville Assembly plant in Ontario. The Flex received a major body update for its 2013 model year, and the time is quickly approaching for another refresh or redesign. In my opinion, it seems like a better time to let the Flex quietly die, and prepare for a new age that could potentially witness Ford bring back its iconic Bronco SUV and midsize Ranger truck.

At the very least, if the Flex were to be discontinued, Ford could use the extra capacity at the Ontario facility to manufacture more popular Edge vehicles and/or more profitable MKX models.

Sean Williams: Sometimes guessing which vehicles should be discontinued is a crapshoot, while at other times the answer is handed to you on a silver platter. In the case of the Chevy SS, made by General Motors (GM 0.44%), it's most definitely the latter.

In terms of bang for your buck, the Chevy SS is a beast. For about $46,500, you get a 415-horsepower manual-transmission monster that has the same 6.2-liter V8 engine found in prior-generation Corvettes and Camaros. Some have gone so far as to call the Chevy SS the "four-door Camaro." By comparison, the BMW 535 xDrive runs more than $58,000, has 115 fewer horsepower, and has a considerably slower 0 to 60 time. I mention BMW because the Chevy SS was geared as a direct competitor to the BMW 5-series.

However, the Chevy SS had issues from the start. First, it wasn't all that new or exciting, even though it was packing a massive engine under the hood. It's manufactured by General Motors' Australian subsidiary, Holden. In Australia, the sedan is sold as the Holden Commodore SS, meaning after it's imported to the U.S., it's merely rebranded as a Chevy SS -- not too exciting. More important, the car had been geared for Australia's luxury consumers, and let's face it, most people don't think of Chevy when they're thinking about purchasing an upscale vehicle. Most of Chevy's offerings target the cost-conscious consumer, and that appears to have been lost in Chevy's attempt to sell the American public on the Chevy SS.

Since its introduction, sales of the Chevy SS have been anemic. After just 2,479 sold in its first full year on dealer lots in 2014, that figure improved to only 2,895 in 2015. Year-to-date Chevy SS sales through June are 1,613. You don't have to be a math wizard to see that consumers simply aren't thrilled with Chevy's Pontiac G8 replacement.

So, how do we know the Chevy SS is probably going bye-bye? General Motors has announced that its Holden plant will be closing in Australia in 2017, and since this is the only plant that manufactures the Chevy SS (the Holden Commodore SS), and sales of the "luxury" 415-horsepower car have been sluggish, it seems logical that GM will pull the plug. With the Camaro and Cadillac ATS and CTS there to pick up the slack, I doubt GM or its shareholders will even notice.

John Rosevear: Fiat Chrysler Automobiles' (FCAU) outrageous Dodge Viper sports car has always been more of a brand-building exercise than a profit center. The V-10-powered beast is hand-built to order in a small factory in Detroit. It has a fiercely loyal following among affluent sports-car fans, but in absolute numbers, that following is exceptionally tiny: Just 298 of the two-seaters were sold in the first half of 2016.

It's outrageous, impractical, and expensive, but the Dodge Viper has always had a loyal following. Image source: Fiat Chrysler Automobiles.

Despite that loyal and well-heeled owner base, it appears the Viper's run is almost over. 2017 is expected to be the super-snake's final year. Ferrari's low-volume suppliers and technology had been key to making the Viper program financially viable in recent years, but now that the Italian supercar maker has been spun off, all of that is gone.

FCA probably could have found a way to keep the Viper going without the Ferrari connection, but the business case is also gone. While the Viper was once the Dodge brand's aspirational performance icon, the Hellcat versions of the Charger and Challenger have that base covered now. It's sad to see the Viper go, but for FCA shareholders, it's probably for the best: Given the company's ongoing cash crunch, it's a wonder the snake survived this long.

Why Shares of Ford Slumped in December
397%