Please ensure Javascript is enabled for purposes of website accessibility
Log In Help Join The Motley Fool
Free Article Join Over 1 Million Premium Members And Get More In-Depth Stock Guidance and Research
By Jason Hall – Jul 16, 2016 at 8:45AM

It's probably too soon to expect the maligned burrito maker to see sales fully recover just yet, but an incremental improvement in the operating results from the first quarter would certainly be nice to see.

Does this make you hungry or queasy? Chipotle sure hopes it's the former. Image source: Getty Images.

It may feel like it's been an eternity for Chipotle Mexican Grill (CMG 0.42%) investors, but it's only been a few quarters since the fast-casual burrito-slinger started feeling the burn of customers staying away in droves following a series of foodborne illness outbreaks. Either way, it has to have been long enough for customers to begin forgetting about it and start coming back, right?

Well, it depends on exactly what kind of "bounce-back" result you're expecting. Let's take a closer look at what the business has looked like the past few quarters, what the company is doing to turn things around, and what management has told us to expect when it reports second quarter financial results on July 21.

About a trillion words have been written to describe the incidents in 2015 that got us here, but to summarize, an E. coli contamination in the Pacific Northwest last year led to hundreds of people becoming very ill and Chipotle closing a number of its restaurants. As a result, the company made a number of major changes to the way it handles and processes food in order to significantly reduce the risk of foodborne illness going forward, as well as implementing technology enabling it to track in real-time, any food product in its supply chain all the way back to the supplier.

Unfortunately, a second event near Boston occurred just when the chain said customers were starting to return. The second outbreak wasn't the product of E. coli, but was instead the result of norovirus that started with a sick employee. Customers quickly lost what faith they had left in the chain, and results have been pretty awful since.

In the fourth quarter of 2015, Chipotle reported a 7% decline in sales, and restaurants that were open at least one year at the start of the quarter saw revenue fall 15%. That was the worst quarter in the company's history -- at least until the first quarter of 2016, when sales fell a stunning 23%, comps fell an even-worse 30%, and the company reported the first loss in its history as a public company as the Boston event sent even more customers for the door. 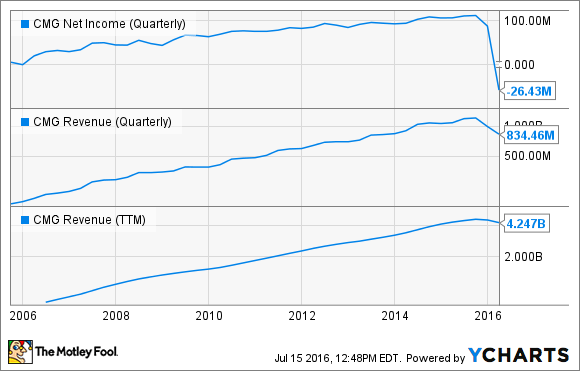 Which brings us to Q2, where the expectations are that the company should have at least slowed (if not stopped) the bleeding, through a combination of time muting people's memories and big promotional efforts designed to generate repeat business and rebuild trust.

What Wall Street is expecting

Chipotle management doesn't typically give much guidance, and over the past several quarters they've offered up even less only going so far as to project its full-year tax rate and the number of stores it would open. Under the circumstances this makes sense, since it's nearly impossible to say with any certainty just how long it will take for customers to start coming back at previous levels.

Wall Street analysts, of course, love to make projections. Here's how they think Chipotle will do:

Looking beyond the consensus, analysts were all over the place on where they think Chipotle's profits will be in the quarter, with a low EPS estimate of $0.13 per share and a high of $1.61 per share. While management wouldn't give any indication where they expect the top- or bottom-line to come in for the quarter, Chipotle CFO John Hartung did say the following on the first quarter earnings call:

Focus on what's in Chipotle's control

Bottom line: There's a lot that's outside the company's control that will determine when business bounces back, with the biggest one being how quickly customers forget, forgive, or just decide their Chipotle craving is worth any perceived risk. But in the age of social media where bad stories never seem to die, not to mention Chipotle's "Food with Integrity" motto, it may be harder for the company to rebuild trust with many customers.

Or maybe it happens more quickly than expected if the company's heavy marketing and promotional efforts gain traction and its former customers are both forgiving and forgetful. We won't know until the story plays out.

As things stand now, investors would do well to focus on what the company is doing to manage the things within its control -- namely providing the best-quality food it can with great service, and continue to move past the events of last autumn and winter with a focus on the customers who do come in.

This quarter may not really be a "bounce-back" one, as sales and profits will almost certainly be down from last year. But a return to profitability (even a small profit) and some stabilization of the business would be a step in the right direction toward an eventual full-blown recovery.