When it comes to the gambling business, the house always wins. But that doesn't mean the house is always a sure bet for investors.

Over the past decade, companies with the vision and capital to invest in Macau have been big winners, and that's where Wynn Resorts (NASDAQ:WYNN) now makes most of its money. Meanwhile, Caesars Entertainment's (NASDAQ:CZR) bet on Las Vegas with borrowed money has crapped out. But now Macau is shrinking, and Las Vegas is growing. Which of course begs the question: have the investing prospects for these companies finally flipped?

One proposal is to split Caesars into an operating company and an REIT, giving creditors a big piece of both companies. But junior creditors have rejected this offer, because they feel that when CEOC was created with the sole intention to move strong operating assets out of the reach of most debtholders, something a bankruptcy court's examiner's report agrees with.

In short, Caesars Entertainment itself could be pulled into bankruptcy if creditors win their fight to bring all of the company's assets into the bankruptcy proceedings.

Las Vegas is in better shape than Macau

The advantage Caesars Entertainment has from an operating perspective is its reliance on Las Vegas. Wynn Resorts gets most of its revenue from Macau, where gaming revenue has declined 44% in the past two years. Las Vegas Strip revenue has also declined slightly over that time, but it's been far more stable than Macau.

This may mean that the revenue trends favor Caesars Entertainment at the moment, but it doesn't mean the company is making money for investors.

When you look at the bottom line, Wynn Resorts easily beats Caesars Entertainment. The chart below shows quarterly net income for both companies, and the only time Caesars Entertainment beat Wynn Resorts was when it recorded a one-time $8.0 billion non-cash gain from deconsolidating CEOC. And it only did that because the unit filed for bankruptcy. 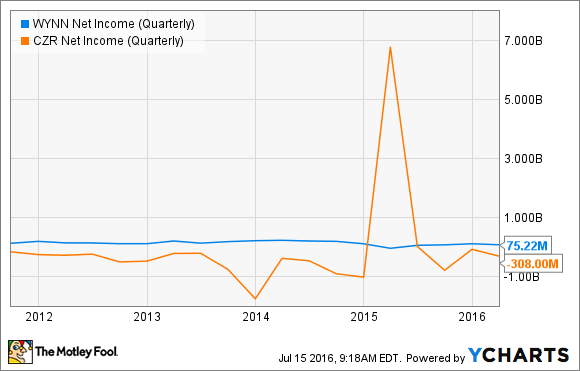 As much as Macau has struggled, Macau is still a highly profitable place to own a casino for Wynn Resorts. Its only resort there has generated $687.5 million in EBITDA, a proxy for cash flow, over the past year, more than $200 million more than the best resort in Las Vegas (which happens to be Wynn Las Vegas).

When it comes to making money, Steve Wynn is the far better bet than Caesars Entertainment's private equity owners.

I think Wynn Resorts has a bright future, whereas we simply don't know if Caesars Entertainment will save itself from bankruptcy. That alone would be enough for me to say that Wynn Resorts is the better investment out of the two.

When you add in Wynn's consistently more profitable business, it's the clear winner. It's one of the top stocks in gambling, and if Macau's gaming drop stops and growth begins again it could be primed for a great few years ahead.