Rates could go as low as -0.5% before investors start hoarding cash in vaults around the world. 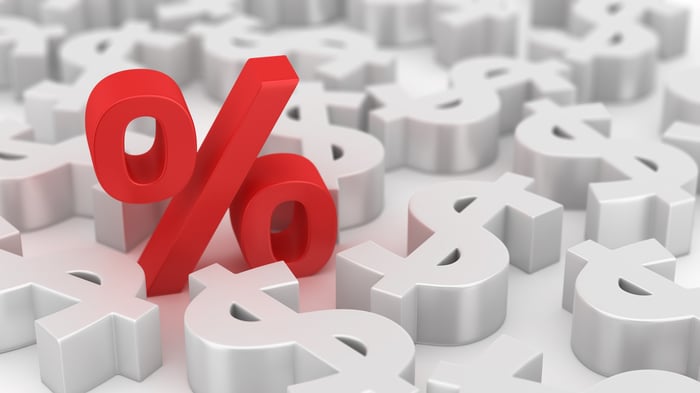 Once thought impossible, interest rates around the world are increasingly plunging into negative territory. Germany recently sold 10-year bonds at a negative interest rate. Similar 10-year bonds issued by Japan and Switzerland have yielded less than 0% for some time now.

Investors are essentially lending their money to governments with the understanding that they will lose money doing it. It seems asinine, but that's exactly what would happen if you buy a negative-yielding bond and hold it to maturity.

So why would anyone buy a bond that guaranteed a negative return? There are a few reasons. First, you can make money buying a bond at a negative interest rate if rates drop even deeper into negative territory. Bond prices go up as rates fall. Thus, a bond bought at a negative 0.25% yield could be sold at a profit at a negative 0.5% yield. This is, of course, a very speculative investment.

Other bond buyers are buying bonds simply because they have to. Financial companies including banks and insurance companies to keep a percentage of their capital in lower-risk government securities. Many mutual funds and money market funds have mandates to keep a portion of their client assets in government bonds -- even if they're guaranteed to lose money.

Finally, it's the matter of practicality: Storing billions upon billions of dollars (or euros, yen, and francs) is a very difficult thing to do. Cash not only takes up space, but securing it from thieves, fire, or damage is much easier said than done.

How low can rates really go?

The Bank of Canada estimates that the true lower bound for interest rates is actually negative 0.5%. That is to say that at any negative rate above negative 0.5% per year, cash-rich institutions would prefer to store cash in negative-yielding government bonds or bank accounts than keep it in a vault.

The bank went on to say that "[c]ash storage costs, including direct costs of storage and insurance costs, are approximately equivalent to 25 to 50 bps per year. Wholesale storage pricing does not vary much with denomination; instead, it is largely driven by insurance costs."

It based its findings on the costs for insuring cash, as well as the cost to store gold in vaults around the world. Notably, the SPDR Gold Trust (GLD -1.72%), which is backed by gold stored in vaults located in New York and London, charges investors a fee of 0.5% annually, effectively a negative 0.5% interest rate on gold.

All this is something of an academic exercise for individuals. After all, banks haven't pushed negative interest rates onto small-dollar savers, valuing the customer relationship that enables them to market other profitable products like credit cards or mortgages. Furthermore, rates in the United States aren't yet in negative territory -- the 10-year U.S. Treasury yields about 1.6% at the time of writing, which is increasingly becoming an anomaly in the developed world.

But all this is to say that the rules of finance are being turned upside down. No longer is 0% believed to be the lower bound for interest rates. As a practical matter, rates could theoretically go as low as negative 0.50% before investors are coerced to store cash under their mattresses.

Why Are Stock Valuations So High Right Now?

Bitcoin Is 15 Times More Expensive to Keep Safe Than Gold