If you look at stock prices right now, you'd be excused for thinking they're high. That's because they are. The bigger question is: Why are they so high? Stocks have been higher than they are right now only twice in the past. The first time was in 1929 and the second time was in 1999, both of which were followed by steep corrections.

This doesn't necessarily mean we're in bubble territory, as there are good reasons stock prices are historically high. Interest rates are low, for example, which makes stocks more attractive than low-yielding bonds, thereby causing money to flood from the fixed-income markets into the stock market.

There have also been a number of important catalysts over the past year and a half that have pushed stocks higher. The presidential election was the big one, as then-candidate Donald Trump campaigned on a promise to cut the corporate tax rate from 35% down to 15%. Like lower interest rates, low taxes contribute directly to stock valuations. That's because stocks tend to be valued as a multiple of earnings. Therefore, because earnings will improve if taxes are cut, stock valuations were primed to climb, as they obviously have.

And it isn't just stock valuations that are high. Farmland is also selling at a historically dear price. As is commercial real estate. And, of course, bitcoin prices have gone through the roof this year. 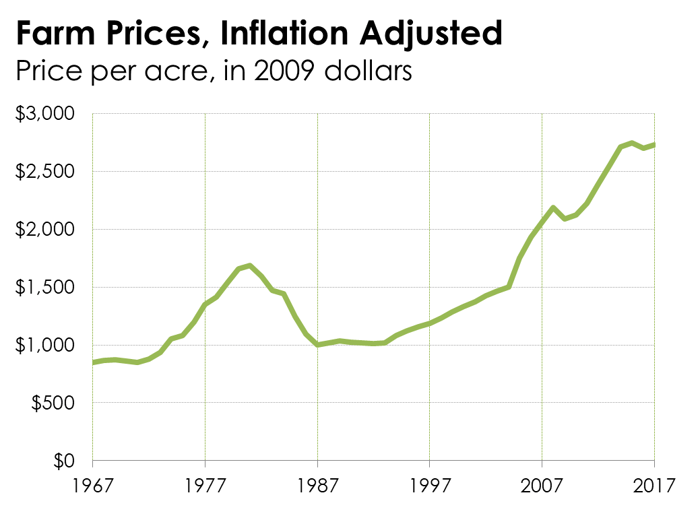 This seems to dim the prospects for future returns. If valuations today are high as a result of low interest rates, doesn't that mean they'll drop when interest rates climb?

That is a reasonable concern that investors should keep in mind when they buy stocks today. In my opinion, this would lead investors in at least two directions.

The first direction is to invest in companies that will benefit from higher interest rates. Banks offer a case in point.

When a bank makes a loan, it's essentially selling money. The price at which it does so is the interest rate. So as rates rise, so, too, will the price of money. And as the price of money rises, so too should bank revenues.

In JPMorgan Chase's (NYSE:JPM) case, the nation's biggest bank by assets estimates that a 100-basis-point increase in both short- and long-term rates will translate into $1.9 billion in added net interest income, a component of revenue. "The firm's sensitivity to rates is largely a result of assets repricing at a faster pace than deposits," notes JPMorgan Chase's latest quarterly regulatory filing.

The impact of higher rates will be even bigger for Citigroup (NYSE:C). It estimates that the same 100-basis-point increase in interest rates will produce $2.1 billion in additional net interest income each year on an ongoing basis. Though Citigroup's interest rate sensitivity analysis also illustrates the downside to higher rates, as the bank would suffer a one-time $4.2 billion writedown of assets that are inversely correlated in value to interest rates.

Among large banks, however, Bank of America (NYSE:BAC) would benefit the most, given how asset sensitive its balance sheet is. Under the same scenario as above, Bank of America would see its net interest income grow by $3.2 billion if rates rise 100 basis points on both the short and the long end of the yield curve.

Hedge against a drop in the market

Another direction investors could go in is to invest in securities that act as a natural hedge against a correction in the market. This isn't to say a correction will happen anytime soon, though the head of JPMorgan Chase's investment bank recently suggested that it could, but it is to say that it shouldn't come as a surprise given the height of the market today.

The assets that seem best positioned to serve as an effective hedge against a stock market correction are companies with exposure to precious metals, especially gold. The most direct way to get this exposure, aside from buying actually buying bullion, is to invest in the SPDR Gold Trust (NYSEMKT:GLD), which owns gold bars. A less direct, but more leveraged, way to get gold exposure is by buying shares of gold miners such as Yamana Gold (NYSE:AUY) or Barrick Gold (NYSE:GOLD).

While stocks tend to fall in the face of heightened risk and uncertainty, the price of gold tends to rise. We saw this in the mild correction at the beginning of 2016. At the same time that stocks dropped approximately 10% in January 2016, the price of gold soared more than 15%. 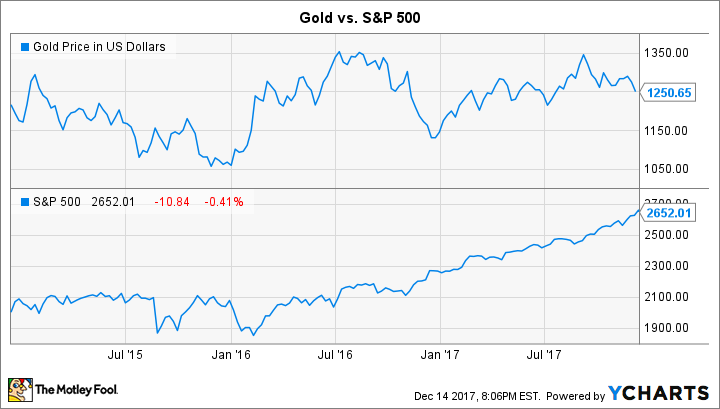 It's for this reason that Ray Dalio, the chairman and chief investment officer of Bridgewater Associates, the world's largest hedge fund, has urged investors this year to think about allocating 5% to 10% of their portfolios to gold. There's no guarantee that the market will correct, of course, but if it does then you'll be happy you followed Dalio's advice.

Which of these three options you choose -- SPDR Gold Trust, Barrick Gold, or Yamana Gold -- is a function of risk and return. The SPDR Gold Trust offers the least risk as well as the lowest expected return of the three. Barrick Gold, the larger of the miners here, would be higher in terms of risk and prospective return. And Yamana Gold, the smaller miner of the two, would offer the greatest risk/return potential.