Both ConocoPhillips and Royal Dutch Shell are in the midst of changing their stripes to be more profitable companies, but which one is the better investment?

Just about every company in the oil and gas business has taken a big hit over the past couple of years thanks to sliding oil prices. Some have been hit much harder than others, though. Case in point, both Royal Dutch Shell (RDS.A) (RDS.B) and ConocoPhillips (COP -0.60%) -- two giants in the oil and gas production business -- have suffered much more than their similar-sized peers. 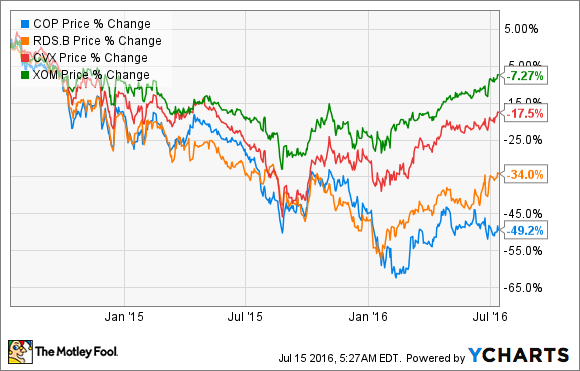 With both companies looking to make big moves as of late to become more profitable in the future, which one is the better buy? We asked two of our contributors to plead the case for each company. Here's what they had to say.

Tyler Crowe: The first thing that's going to make me gravitate more toward Royal Dutch Shell over ConocoPhillips is the greater diversification of its revenue stream. After ConocoPhillips spun off its refining, logistics, and marketing businesses in 2012, all of its future profits became completely reliant on oil and gas prices remaining strong enough to generate solid returns. ConocoPhillips may be doing a decent job as of late to lower its costs and generate profits at even lower oil prices, but there's still a lot of speculation built into the business.

Royal Dutch Shell, on the other hand, has a much more diversified revenue stream that touches every part of the oil and gas value chain from the moment a reservoir is discovered to when the gasoline goes into your tank. This helps to make profits more consistent and helps to generate cash throughout the commodity cycle.

What also makes Shell such a compelling stock right now is that the company looks to really be getting its act together in terms of generating profits. Shell has been known for years as the technical one in the integrated oil and gas business. The player that looks to turn profits from places others didn't think possible. The problem was that this typically meant those profits margins weren't as good as those of its competition, and the company's returns on capital suffered because of it.

Today, though, CEO Ben van Beurden has taken some steps to shed Shell's production-over-profits moniker by focusing on fewer projects with higher returns. It has halted its expensive exploration work in the Arctic and has divested itself of several lower-return assets while bolstering its position in LNG production through its investment in BG Group. This turnaround is a fascinating thing to watch, and on the surface, it looks as though it could be a way to make Shell a much more compelling investment over the long term. When you also consider Shell's share price and its 6.6% dividend yield, it looks like it could be a better long-term buy than ConocoPhillips.

Matt DiLallo: There's no doubt about it, an investment in ConocoPhillips is a bet on higher oil prices. As an independent oil and gas producer, the company makes all of its money from production, with its profits ebbing and flowing along with prices. That said, the company is making several business model changes as a result of the downturn to capture even higher profits when prices rebound.

The first shift is getting out of deepwater exploration, which is costlier and carries more risk than other development projects. Not only do these projects take years to deliver any production, but they require a massive upfront investment that only pays off at higher oil prices.

The other significant change is a shift away from increasing production by an absolute number, instead seeking to grow on a per-share basis. Before the downturn, the company's plan was to expand production by 3% to 5% per year. However, growing for the sake of growth doesn't always pay off. This uneven performance is why the company is now forcing expansion capex to compete for capital with share buybacks, which it believes will improve its returns going forward.

Because of its returns-driven approach, the nimbler ConocoPhillips should outperform its big oil rival in an improving oil market.

Shell Plans to Cut Thousands of Jobs Amid Shift to Carbon Neutrality: What Investors Need to Know
349%