With shares down over 50% in 2016, FitBit still isn't a value, even with new trackers on the way.

In a bruising and bloody year for its stock, FitBit (FIT) hasn't inspired much confidence in the fitness-tracker market. The stock's price has dropped by over 50% while the S&P 500 has grown by over 5% this year. 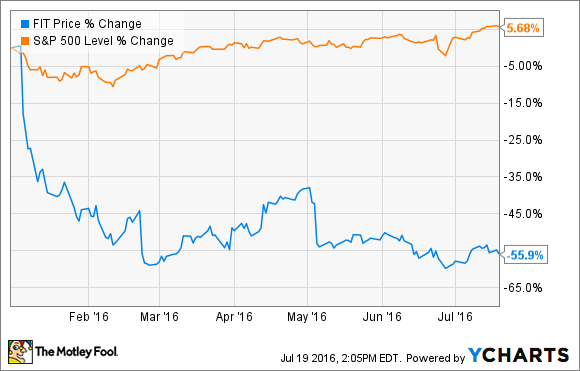 However, the company could catch a break during the gift-giving season now that it's developing two new wearables for later this year.

According to enthusiast site Wareable, FitBit has been secretly developing two new wearables, code-named Laryon and Fermion. The name Layron, Wareable says, appeared in legal filings as part of FitBit's legal battles with rival Jawbone, though the code name Fermion appears to be a newcomer. Both devices are reportedly being tested, with FitBit employees having worn prototypes of each model. The employees are using FitBit's signature black wrist covers to shield the devices from the interested public.

Also of note, recently uncovered trademark applications for the names FitBit Flex 2 and FitBit Charge 2 suggest that Layron and Fermion may serve as updates for the company's two most popular devices.

Consumers shouldn't have to remain in suspense for long. The Wareable report claims that FitBit plans to use September's IFA trade show in Berlin to unveil Layron and Fermion to the public. This timing jibes with tradition in the consumer-electronics spaces, where names like Apple also refresh their most important devices in the fall.

Whether these moves will help reverse FitBit's poor fortunes of late, of course, remains uncertain.

Trading at just 22 times its last 12 months' earnings, just under the S&P 500's multiple of 24, FitBit is neither a screaming bargain nor terribly overvalued. There are a number of reasons why.

For one thing, although FitBit dominates the fitness trackers' market, the long-term growth trajectory for non-smartwatch wristbands appears less robust than many once thought. According to research firm IDC,  the market for sensor-enabled wristbands should remain the largest single category of wearable on the market in 2016. However, through the end of the decade, the other categories, most notably smartwatches, are expected to explode in popularity.

IDC estimates that smartwatches will grow at an average annual rate of about 27% through 2020, whereas wristbands -- which encompass the majority of FitBit's product portfolio -- is expected to average 4.3% annual growth through decade's end.

What explains this discrepancy? IDC touches on a commonly cited risk factor for wearable-specific vendors such as FitBit. In its report, IDC states, "Through their simplicity, fitness-focused wristbands have dominated the market thus far. ... However, that dominance will be challenged by watches as many watch vendors incorporate basic fitness features into their products."

Smartwatches, such as the Apple Watch, will play a prominent role in this transition, though IDC sees the real growth killer as normal watches from brands such as Fossil and FitBit's own Blaze.

FitBit can certainly grow its sales in excess of the 4% CAGR that IDC estimated by expanding its share within its wrist wearables space. In fact, the average analyst estimate seems to call for it. However, the gradual maturation of its device category will make such efforts all the more challenging for FitBit. So while the company's continued product-development efforts speak to its ambitions for wearable dominance, the long-term outlook for FitBit stock remains far from clear.