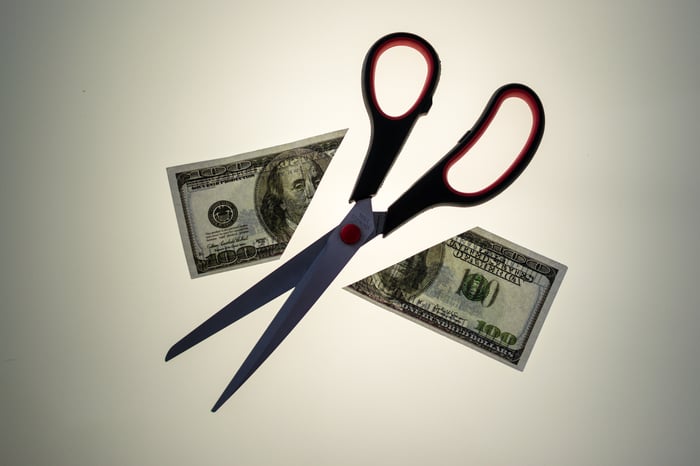 The S&P 500 is up about 2% over the past year, and it's currently flirting with all-time highs. That's great, but not all stocks are sharing equally in the prosperity. In fact, investors in some companies have had such a horrific 12-month stretch that their stocks have fallen by more than 50% over that same time period.

Below is a list of three such stocks and a quick recap of why each has been bludgeoned over the past year.

SolarCity (NASDAQ:SCTY.DL) is the leader player in the booming solar market, so why isn't this stock is on the list? The blame for that can be placed squarely on the shoulders of the company's two most recent earnings reports.

In February, SolarCity disappointed investors with the news that it missed its full-year installation guidance for 2015. New installations came in at just 870 MW for the year, which was shy of its minimum target of 878 MW, but even that doesn't tell the whole story. Last summer, SolarCity was calling for installations between 920 MW to 1,000 MW, but then it pulled back on that estimate quite a bit. Thus, the company's actual results fell short of already-reduced guidance. Not good.

The story got a little bit brighter in May, when SolarCity announced that it installed 214 MW of solar system, which was ahead of its 180 MW guidance. However, the company poured cold water on the report when it said new bookings were weak and slashed full-year guidance from 1.25 GW to a range of 1 to 1.1 GW.

Growth investors don't tend to look kindly upon companies that set goals for themselves and then come up short, which explains why shares have been in the dog house.

Of course, the battered share price hasn't gone unnoticed. Elon Musk has proposed that Tesla Motors could acquire SolarCity outright in an all stock deal, stating the combined company would be able to take clean energy to the masses.

Still, with a buyout price between $26.50 and $28.50, even if the deal goes through, SolarCity shareholders won't come close to being made whole from the drubbing they've taken over the past year.

Investors in Fitbit (NYSE:FIT) have faced a lot of pain over the past 12 months, which is a bit puzzling if you only look at the company's revenue. Last quarter, sales jumped 50% to $505 million, and analysts believe sales for the full year will eclipse $2.5 billion, which represents 38% growth.

So, if sales are trending higher, why has the stock been a sinking ship?

That's likely owed to the fact that the company is actually losing market share. Sure, 50% growth sounds fantastic, but when the industry as a whole jumps 70%, Wall Street thinks you're losing your edge. Research from IDC appears to back up that thesis. Data show that Fitbit's market share plunged to 25% from 33% a year ago.

To make matters worse, the company is now seeing pricing pressure from the flood of low-cost rivals that are looking to wrestle away even more share from this growing market. This list includes China's Xiaomi, which recently launched a $15 fitness tracker comparable to Fitbit's $100 Flex offering.

Will the company be able to maintain it's growth and profits when facing that kind of competition? The market's answer to that question appears to be a resounding no.

Once upon a time, Valeant Pharmaceuticals (NYSE:BHC) was a hedge fund manager's dream. The company's stock was riding high thanks to its "innovative" practice of buying pharmaceutical products and then immediately jacking up their prices. Valeant kept this act up for years, and it went on to become an epic, debt-fueled acquisition binge that caused the company's stock to skyrocket.

However, this company winded up being a house of cards, and the beginning of the end started in 2015, when presidential candidate Hillary Clinton started to take notice of the company's "predatory pricing" practices.

That move caused short-sellers to start to take a closer look at the company's operations, and all of the sudden, huge cracks began to emerge. A big issue related to Valeant's relationship with one of its specialty pharmacy distributors called Philidor Rx Services; news broke that the company wasn't recognizing revenue properly from sales to Philidor.

Valeant quickly severed ties with Philidor, but the damage was already done. The company had to delay the filing of its annual report, which in turn caused the company's debt holders to freak out, and it's been a downhill slide ever since.

Valeant has made a number of big moves to attempt to restore its image. The company signed a deal with Walgreens Boots Alliance and agreed to slash its prices. Longtime CEO Michael Pearson was shown the door, and they brought in Perrigo's well-regarded CEO Joseph Papa to fill the gap.

It's anyone's guess at this point whether or not the company will be able to turn the ship around, but with $31 billion in debt and sales in free-fall, this is one company I plan on avoiding like the plague.