Teen clothing retailer Aeropostale (NYSE:AROPQ) has abandoned a restructuring plan it released back in May when it filed for Chapter 11 bankruptcy protection. Instead of emerging from bankruptcy, the company has decided to put itself up for sale in an auction scheduled for Aug. 22. Who will bid, and what are the implications for other clothing retailers?

Back in the day, the cool kids shopped at malls for their favorite clothing brand's logo plastered on the front (or back) of a hoodie or T-shirt. Today's styles are purchased online and embrace individuality, a shift perhaps spurred by social media.

As a result, 2016 has been a difficult year for many retailers. Transactions have steadily shifted away from brick-and mortar stores to the internet, where buyers have more options and the ability to research price. Too slow to adapt, many traditional stores have been left out in the cold. Aeropostale joins a list of business failures this year, including the liquidation of inappropriately named Sports Authority.

That sports retailer also entered Chapter 11 bankruptcy with intentions of reemerging later as a still-intact business, only to decide later that the best option was to put itself up for sale. The victorious bidder of the Sports Authority auction went to a group of liquidators, opting to sell off the spoils rather than try to keep any semblance of the business intact.

While it's too early to know Aeropostale's fate, the company could face a similar situation. Sales have been in steep decline since 2012, the company has yet to identify a lead suitor for the auction next month, and bankruptcy proceedings are getting bogged down by disputes with a primary lender and clothing supplier. Chances of seeing the Aeropostale name remain in your local shopping mall are dwindling. 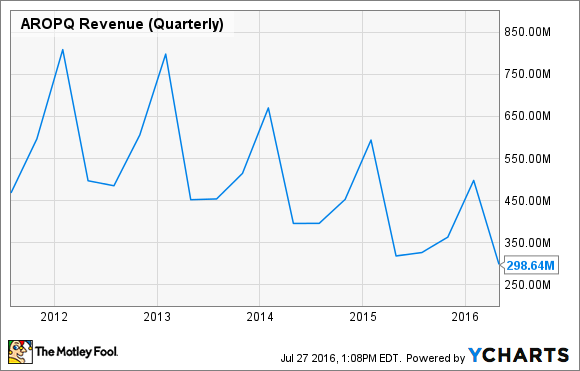 Aeropostale's terrifying quarterly sales decline is ominous for the company's chances at survival and sends a warning message to competitors. AROPQ Revenue (Quarterly) data by YCharts.

What Aeropostale's plight means for other clothing retailers

The message to clothing retailers is simple: go online. Traditional storefronts are consolidating into fewer locations. While there will always be a place for the physical store, internet accessibility is continuing to change how consumers spend money.

The demise of Aeropostale could also provide a boost to fellow shopping mall clothiers like Gap (NYSE:GPS) and American Eagle Outfitters (NYSE:AEO). Although foot traffic is falling at malls, one less option for shoppers to stop at could provide a boost for the survivors.

Gap in particular has been focused on doing what the defunct Aeropostale originally intended to do during bankruptcy: close underperforming stores. The company is directing attention especially to its underperforming international locations and expects to see annual pre-tax savings of $275 million when the closures are complete.

In tandem with this, the company is opening new Athleta stores in an attempt to capture the popular athleisure fashion trend. Gap has also increased efforts to boost its online presence, launching new sales platforms for several of its brands in the last year. These initiatives, while certainly not ahead of the curve, should help the company stay relevant as shopping trends evolve.

American Eagle, too, has been doing fine in the new retail environment. Sales have edged up in the last two years driven by new store openings and 7% same-store sales growth last year. The company has been focused on increasing its international presence as well, and the "high quality at a reasonable price" model has been a winning strategy.

That international footprint is paired with a strong e-commerce platform. American Eagle can accept orders and ship to over 80 countries. The company's global internet presence has also helped the same-store sales story. In the latest quarter, the company saw another 6% increase on top of last year's 7% same-store increase.

The message to retailers applies to investors: Your retail holdings should include an online sales mix. Companies that have been slow to catch on to changing trends have not fared well over the last few years. If you haven't already, it's time to cut ties with stocks that have been stubbornly ignoring the internet.

It is time to redirect attention toward retailers who are actively transforming their brand. As mentioned earlier, Gap and American Eagle are two such traditional retailers. Gap is in the midst of an attempted rebound and American Eagle has already experienced some success in its initiatives in recent years.