Please ensure Javascript is enabled for purposes of website accessibility
Log In Help Join The Motley Fool
Free Article Join Over 1 Million Premium Members And Get More In-Depth Stock Guidance and Research
By Jason Hall – Jul 30, 2016 at 7:02AM

When the wood-alternative-decking leader last reported earnings in May, management said it was focusing on taking more market share from wood through its advertising and marketing efforts. We may get our first glimpse at whether that effort is paying off when the company reports on August 1.

Trex is set to announce what should be another strong quarter on August 1. Image source: Trex Company.

There aren't a lot of companies that can say they have more than 40% market share in their industries, yet still have enormous growth potential. But that's the case with Trex Company, Inc. (TREX -0.17%). The Virginia-based company, which manufactures wood-alternative decking, railing, and related accessories, is indeed in that position.

As the company reminded us last quarter, it may have 41% of the alternative decking industry, but the real opportunity is traditional wood. And the entire wood-alternative industry only makes up about 16% of the 2.4 billion linear feet of decking sold in North America every year. So yes, there's room to grow.

Trex is set to report second-quarter financial and operating results on August 1. When we last heard from the company in May, management described how the company was shifting its marketing and advertising message to be less about differentiating Trex from its wood-alternative competitors, and more about differentiating Trex from traditional wood. Considering how much bigger that slice of the pie is, it could pay off in a very big way.

What Trex has accomplished

Over the past several years, Trex has grown at a much-faster rate than its competitors, leading to pretty substantial growth in market share: Again, this only measures share of the wood-alternative segment, which, in its entirety, only makes up about 16% of the entire decking industry. In other words, Trex only has about 6.6% of the addressable market -- and that's only North America.

This is Trex's financial performance since 2012: 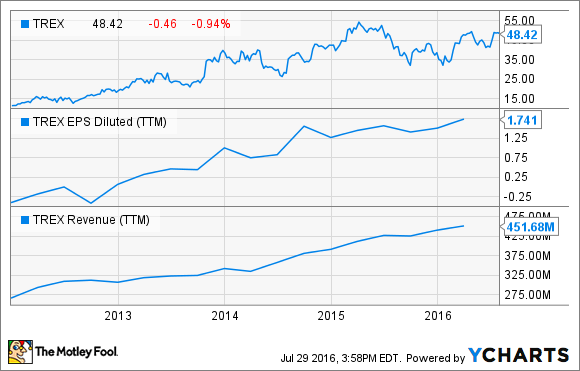 That's a laudable performance that has generated over 200% in returns for Trex shareholders.

What Trex is doing now to drive growth

As described above, Trex management has made a conscious decision to shift its marketing focus directly to wood versus just differentiating its own products from those of its wood-alternative competitors. In part, this shift is likely because of the company's strong brand recognition as a result of years of effective advertising and marketing. And it's not just traditional advertising, but also social-media impressions: As you can see above, Trex is far-more recognized than its competitors, with far-more awareness and engagement on social-media platforms. This is likely a big reason why visits to Trex's website have increased so much over the past several years. This strong brand recognition, as well as the company's broad distribution, should help the company maximize its new marketing focus on being superior to plain old wood:

If there's a risk to this kind of marketing approach, it's that Trex's competitors will benefit, too, because it's more about differentiating wood alternatives from traditional wood. But I think that's where the benefit of the company's name recognition and industry-leading distribution come into play.

Trex is also the only manufacturer that offers a full selection of branded accessories, including railing, lighting, color-matched storage and pergolas, and other licensed products. It's a true "one-stop shop," and when someone is prepared to spend upwards of $20,000 on a deck, the importance of the aesthetic -- of everything being designed to work together to accomplish the proper visual appeal -- can make a big difference.

What to expect for the second quarter

Trex's guidance for the second quarter is for $145 million in sales, an 8% adjusted increase from last year's quarter. Profits jumped 33% in the first quarter on similar revenue growth, largely due to lower costs and manufacturing cost savings, and CEO Jim Cline said that he expects the second quarter would see similar benefits to operating leverage. While he wouldn't pin down a particular earnings number, it's not unreasonable to expect it to be above 20%, though 33% may be on the high side because the company deferred some first-quarter marketing spend to the second quarter.

Nonetheless, the company continues to benefit from a strong market for housing and home improvement, its long-term focus on innovative products and building strong brand recognition, and a relentless focus on cost control and lean manufacturing, which has played a big role in driving incremental profits. That's worked incredibly well during the past several years. Considering the market opportunity, it's likely to continue paying off for years to come.

Is a Housing Crunch About to Tear Down This Stock?
356%