Please ensure Javascript is enabled for purposes of website accessibility
Log In Help Join The Motley Fool
Free Article Join Over 1 Million Premium Members And Get More In-Depth Stock Guidance and Research
By Scott Levine – Jul 31, 2016 at 9:12AM

Interested in alternative power but tired of hearing about solar and wind? Perhaps this fuel cell provider is the opportunity you've been waiting for. 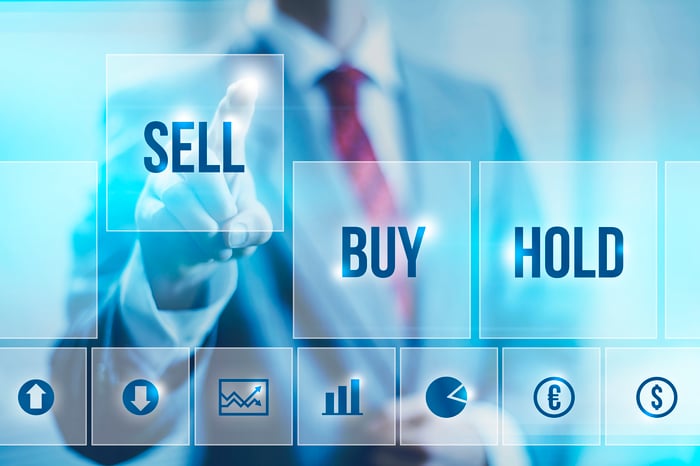 For investors who have a stomach for risk and volatility, an investment in FuelCell Energy (FCEL -0.57%) would provide an opportunity to gain exposure to one of the lesser-known niches of the alternative power sector: fuel cells. Let's take a closer look at the company to see if now's a good time to pick up shares, or if waiting would be wiser.

Cutting it short on top

For nearly 25 years, FuelCell has existed as one of the few publicly traded fuel cell companies. The company's ability to survive in a tenuous market is impressive. What's more impressive, though, is that during those 25 years, the company has never reported a profit. This alone doesn't mean that an investment is unwise. Instead, it demands that we focus closer on the company's fundamentals.

Digging in deeper, we find one cause for concern: inconsistent revenue growth. In a growth industry, we want to see that the company is successfully growing sales -- that the market is accepting the company's product. Unlike its fuel cell peer, Plug Power (PLUG 1.62%), which has grown revenue over the past five years at a compound annual growth rate (CAGR) of 31.8%, FuelCell's revenue has grown at a meager CAGR of 4.5%. Not an auspicious sign.

Further suggesting that the market is unwilling to accept FuelCell's offerings is the lack of diversity in its customer base. In fact, it's worsening. The concentration of FuelCell's consolidated revenue has not only increased from its largest customer, POSCO, but the company's five largest customers are also accounting for a frighteningly large percentage of the company's sales.

These, as well, are far from encouraging signs.

Clearly, POSCO has played a crucial role in FuelCell's ability to keep the lights on for as long as it has. It stands to reason that the company would have found itself in a precarious position if POSCO had taken a step back. That's exactly what will soon be happening.

By the end of the year, FuelCell's management expects POSCO to come online with its own production capabilities. When this happens, FuelCell will no longer provide kit sales to POSCO. According to management, the kit sales are a low margin enterprise, so by removing them from the equation, the company will be able to redouble its efforts on the higher margin business of engineering, procurement, and construction (EPC) of its fuel cell power stations.

This all sounds promising, but it should also give one pause. Although FuelCell has never reported a profit while it counted POSCO as a significant customer, the reshaping of the company's business model demands some patience on the part of investors -- patience to see how the shift affects the overall business.

That's an expensive fuel cell in the window

FuelCell enjoyed some mild celebrity recently when it announced a partnership with ExxonMobil to pursue carbon capture technology. Though the company recognizes this as a potential multi-billion dollar opportunity, the market hasn't been quite as receptive; shares are down 48% from this time last year. This alone doesn't mean that now's the time to pick up shares, though, so let's look at the stock price from another angle.

Because the company is unprofitable, we can't use the traditional price-to-earnings metric to value the shares; instead, we'll turn to the company's price-to-sales ratio. Currently, shares are trading at less than 1.0 times trailing sales, and with shares consistently trading at more than 1.25 times sales, it might seem like there's a bargain waiting to be had. 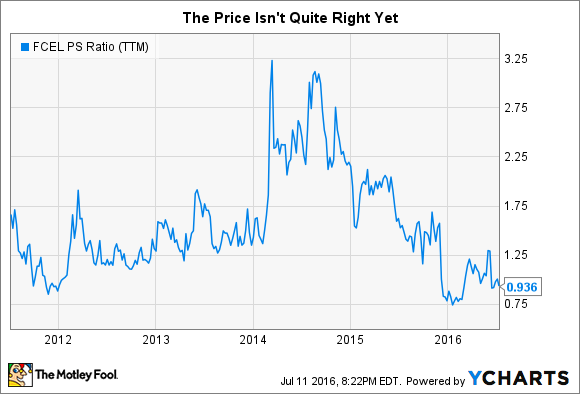 Even at the currently low multiple, I don't think shares look particularly attractive. In fact, I'd be surprised if they don't continue to fall further in the coming months. Although it's impossible to tie the stock's price to any one variable, a strong correlation exists between the company's declining gross and operating margins throughout 2015 and the stock's declining price during the same period. It seems like a logical relationship. After all, what are sales really worth if the company is unable to extract substantial value from them? 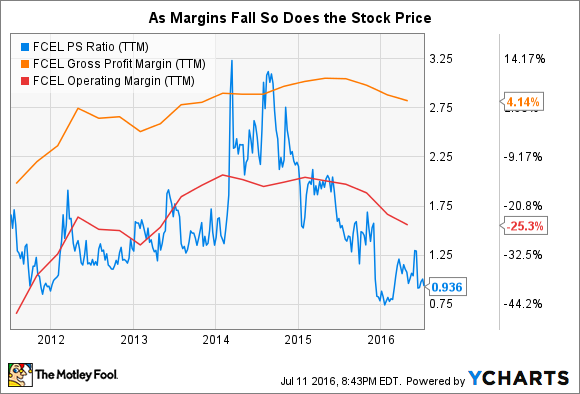 Presumably, FuelCell's margins will continue to decline for the remainder of the year, and as they do, I expect shares to drop even further. If and when the margins improve, I suspect that it will take time before the market rewards FuelCell and drives shares higher. Thus, investors should be in no rush to pick up shares any time soon.

At this point, investors considering an investment in FuelCell would be wise to sit on the sidelines to see how the coming months play out. For one, investors will need to keep an eye on the company's revenue to see if revenue from the EPC turnkey projects adequately replaces the revenue missing from POSCO. If this comes to fruition, investors should likewise look for improving margins from both the product sales and service agreement sides of the business.

Elsewhere, investors should look for greater diversity in FuelCell's customer base. Specifically, the company's five customers should account for an increasingly smaller amount of the company's overall revenue.

Fanciful fantasies of collecting billions in revenue from the partnership with ExxonMobil are well and good, but the above items would be concrete evidence that the company is proceeding in the right direction -- evidence that would give greater cause to seriously consider picking up shares.

Scott Levine has no position in any stocks mentioned. The Motley Fool owns shares of ExxonMobil. We Fools may not all hold the same opinions, but we all believe that considering a diverse range of insights makes us better investors. The Motley Fool has a disclosure policy.

Has FuelCell Energy Earned a Clean Bill of Financial Health?
356%