What: Shares of Trex Company, Inc. (NYSE:TREX) are up nearly 13.5% at 1 p.m. EDT on August 2, following the company's second-quarter earnings report, released after market close on August 1. Including today's jump, Trex shares are up almost 46% since the start of 2016: 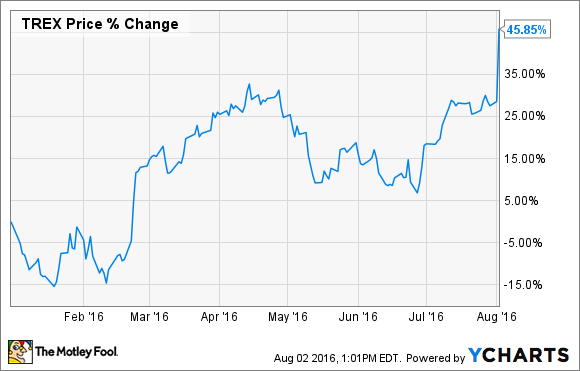 So what: Trex reported revenue increased 7% to $146 million, and earnings per share shot up an incredible 36%, as the company continued cost-improvement and efficiency efforts. As this quarter showed, those efforts are paying off, driving higher and higher incremental margins from each dollar of revenue growth. Gross margin was up 350 basis points, to 41.9%, as a result of the company's gains in operating leverage.

Now what: Trex management expects these gains to continue in the second half of 2016, giving guidance of high single-digit sales growth and lower production costs for the full year. Third-quarter revenue is expected to be $105 million, which would be a 12% increase from last year's third quarter, and a strong finish to the deck-building season of late summer and early autumn.

Management seems relatively sure that it's not just a one-year trend, either. In the earnings release, CEO Jim Cline said the following:

Longer term, we see significant market opportunity. Trex brand recognition has never been higher, initial metrics indicate that our marketing campaigns are gaining traction with both the trade and consumers, and our innovative product line-up positions us for continued leadership in the decking and railing market supported by increased conversion from traditional wood products.

Trex has delivered steady revenue and strong earnings growth over the past couple of years, and management continues to drive incremental growth in a strong market in North America, and increasingly around the world.