Zynga (NASDAQ:ZNGA). Do you remember Zynga? Of course you do. If you were on Facebook (NASDAQ:FB) years ago, back when all your friends were playing online mini-games via the social media site, you surely received the multiple pieces of electronic junk mail telling you what your friends had just built on Farmville, or inviting you to play Farmville yourself.

At one point, Zynga was considered the way to invest in Facebook (NASDAQ:FB) before Facebook did its IPO -- and before Facebook decided to crush Zynga's business model. Once Facebook became a publicly traded company itself, though, a lot of people decided that Zynga had become kind of irrelevant, and its stock collapsed. 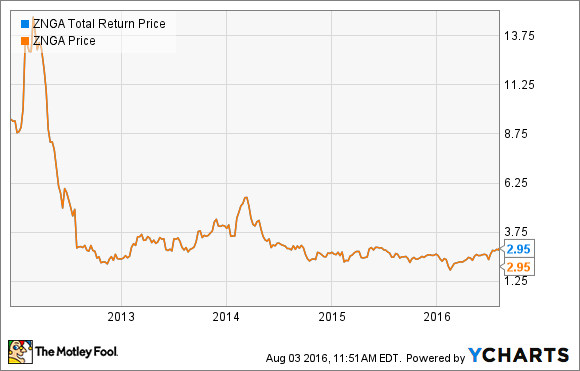 But now, one analyst thinks it's time to buy Zynga again. Here are three things you need to know.

As related on StreetInsider.com this morning, Cowen & Company is an analyst that has followed Zynga from its inception -- but never liked it. "The breakout success of CSR Racing 2," however, "along with steady mobile growth for its casino franchises," has finally convinced Cowen to upgrade Zynga shares from market perform to outperform.

Today, Cowen believes that Zynga shares that cost less than $3 apiece could soon be worth as much as $3.50. This, in the analyst's opinion, justifies a buy rating.

2. Racing to the top

"CSR Racing 2 has been a steady top 15 grossing title since its launch a little over a month ago," argues Cowen. What's more, the company already owns a total of six of the 100 top-grossing iPhone games, and is preparing to release a new title, Dawn of Titans, that Cowen also expects to be a big hit.

All of which is to say that Zynga is not just Farmville anymore -- and hasn't been for quite some time.

All of which sounds good for a start. But Zynga has had popular games before, yet never won Cowen's seal of approval before. What makes this time different, in Cowen's estimation, is that the stock's valuation finally looks attractive.

According to the analyst, CSR Racing 2 is currently producing revenue at an annual run-rate of $175 million to $190 million. (Zynga as a whole does $770 million in annual revenue.) Operating profit margin on these CSR Racing 2 revenue averages 40% to 45%, and the company is showing "strong revenue generation into 2017," which suggests that these numbers will grow over time -- perhaps as fast as 35%.

But does all of this add up to a good buy thesis for Zynga? Well, let's consider:

Valued at $2.6 billion today, with nearly $860 million in the bank and no debt, Zynga can most charitably be described as a $1.9 billion enterprise value company. Currently, this company is not profitable, though, (having racked up more than $100 million in losses over the past 12 months) and burning cash (S&P Global Market Intelligence data put Zynga's cash-burn rate at just over $9 million).

At that rate of cash burn, Zynga can float on its near-$900 million cash hoard for nearly a century before running out of money. As such, there's little risk of Zynga disappearing any time soon. On the other hand, without positive cash profits, or at least GAAP earnings, it's an open question how much "35% growth" is worth at Zynga. (What is it going to grow, after all? Its losses?)

On the other hand, if Cowen is right about its estimates, then $190 million in extra revenue from CSR Racing 2, times 45% operating margin on that revenue, work out to about $85 million in extra annual pre-tax profit for Zynga.

And here's the thing: $85 million in extra profit from CSR Racing 2 would be more than enough to offset the $74 million in operating losses Zynga reported over its last 12 months. It could be enough money to turn Zynga from a money loser into a money maker -- if Cowen & Company is right about its forecast, and if Zynga hits the very tippity-top of that forecast.

If Zynga misses that top, though, well...$175 million in extra revenue, at a 40% profit margin, would yield only $70 million in profit, and Zynga would still lose money -- just as it has lost money for five straight years.

This Just In: In a Blast From the Past, Zynga Gets Upgraded @themotleyfool #stocks $ZNGA $FB Next Article
Current