What: Oil stocks are on the move today after a boatload of companies reported earnings within the past 24 hours. The biggest movers today are Hornbeck Offshore Services (NYSE:HOS), Denbury Resources (NYSE:DNR), Oasis Petroleum (NYSE:OAS), Laredo Petroleum (NYSE:LPI), and EP Energy (NYSE:EPE), which all moved double digits at some point in the day: 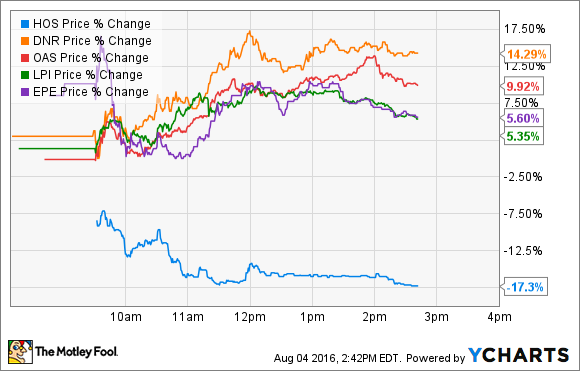 So what: Hornbeck Offshore Services stock is getting hammered today after reporting an abysmal second quarter. The offshore support company's revenue dove more than 60% year over year, and 30% from last quarter, to just $53.7 million, which missed the consensus estimate by more than $14 million. Meanwhile, the company's net loss widened to $0.57 per share, which was not only $0.36 per share wider than last quarter, but it was $0.18 per share more than analysts were anticipating. Declining vessel utilization was the primary driver of this decline.

Enhanced oil recovery specialist Denbury Resources, on the other hand, reported a better-than-expected quarter. The company recorded adjusted earnings of $29 million, or $0.08 per share, which was $0.06 per share above the consensus estimate. Significant cost reductions drove this surprising result, with lease operating expenses (LOE) falling 24% year over year, while general and administrative expenses slumped 41% over the same timeframe. This helped the company overcome very tough offering conditions, which included significant weather-related downtime at two of its fields. Despite those issues, the company remains on track to meet its full-year guidance.

Bakken Shale driller Oasis Petroleum, likewise, reported higher-than-anticipated results. While the company reported an adjusted loss of $19.4 million, or $0.11 per share, that was $0.04 per share better than analysts were expecting. Like Denbury, Oasis did a good job pushing costs down, with its LOE costs falling by 15% over the past year. In addition, the company's solid drilling results are allowing it to boost its full-year production guidance.

In keeping with the theme, Permian Basin driller Laredo Petroleum beat expectations after reporting adjusted net income of $28.2 million, or $0.13 per share, which was $0.03 per share above the consensus estimate. Laredo was able to push its LOE costs down 36% year over year, which when combined with stronger-than-anticipated production fueled its earnings beat. Further, due to its strong well results thus far, the company is boosting its full-year production guidance by 5.5%, with its production projection now 11% higher than its initial estimate.

Finally, EP Energy reported a solid second quarter. The shale driller earned $62 million, or $0.25 per share, which was a significant reversal from its year-ago loss of $212 million, thanks to lower operating expenses. Furthermore, the company generated $26 million in free cash flow and bolstered its balance sheet by repurchasing $182 million of debt during the quarter for just $106 million in cash.

Now what: The second-quarter results of these five companies showed two underlying trends. First, the offshore sector is brutal right now, which had a significant impact on Hornbeck Offshore Services' results.

On the other hand, onshore exploration and production companies have been able to adapt more quickly to the current environment, which is evident by their expectation-beating second-quarter results. In other words, investors are better off looking onshore for oil stock investments right now.