The automaker has lost market share in China as lower-cost models from local Chinese manufacturers have cut into its sales. But the Blue Oval is fighting back, and it posted a big sales gain in July.

The latest Ford Edge is a big hit in China, so much so that demand has exceeded supply. Ford has been working to make more of the hot crossovers available. Image source: Ford Motor Company.

Ford doesn't report its China sales model-by-model. Instead, it reports results for the two joint ventures it has with Chinese automakers that manufacture Ford-brand vehicles in China, as well as an overall total number of sales that includes sales made directly by Ford. Those direct sales include a small number of Ford- and Lincoln-brand vehicles imported into China from Ford's factories in other countries, including the United States.

Ford's joint venture with Chinese automaker Changan Automobile, called Changan Ford (CAF), builds and sells Ford-brand passenger vehicles. The joint venture's lineup includes many Ford models familiar to Americans as well as a few China-only variants. It sold 69,074 vehicles in July, up 20% from a year ago.

Ford's other joint venture with Jiangling Motors, called Jiangling Motor Corporation (JMC), builds and sells several Ford trucks and commercial vehicles, including Ford's Transit lineup of commercial vans. The venture has struggled recently amid soft sales in China's commercial-fleet market segments, but sales in July rose 6% from a year ago to 17,748.

Ford's other sales in China are made up of the vehicles it imports. Those include the Ford Mustang, a small number of high-performance variants of other models such as the Focus, and all of the Lincoln-brand vehicles sold in China. Those sales totaled 1,367 in July, down 39% from a year ago.

What it means: Ford is working to regain lost market share

It appears that Ford has moved aggressively to regain market share that it lost earlier in the year to competition from local Chinese automakers.

Ford's market share in China had been slipping after its pricing came under pressure from lower-cost models made by local Chinese automakers. That hurt Ford -- especially at the lower end of the market, where its Escort (a China-only compact sedan) and Focus had been selling in high volumes.

Ford's market share in China in the second quarter of 2015 was 5.3%, but that had fallen to 4.5% by the first quarter of 2016. It fell further in March and April, Ford CFO Bob Shanks said last week, prompting the Ford China management team to take aggressive action.

As this slide from Ford's second-quarter earnings presentation shows, those actions helped turn things around. But Ford's pricing took a hit, as it discounted to keep pace with trends in the overall industry. 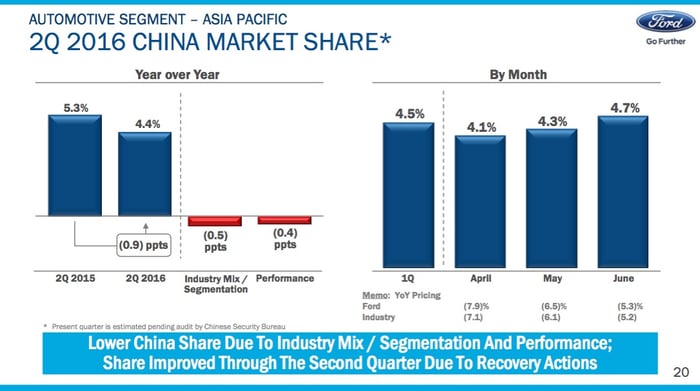 The slipping sales and discounts hurt Ford's bottom line: Its equity income from its two China joint ventures fell 28% to $296 million in the second quarter.

Ford CEO Mark Fields said that he was optimistic that Ford's China operation would regain the lost ground, both in terms of market share and profits. Fields said the the company was taking steps to improve supplies of the hot-selling Edge SUV, cutting costs from its entry-level Escort sedan and EcoSport SUV, and adding new models, including a version of the big Ford Taurus sedan that will qualify for a special tax break.

The upshot: Rising sales are good -- if they translate to rising profits

Ford didn't release any details of its pricing or discounts in China in July. We won't know for sure whether these sales gains translated into profit gains until Ford reports it third-quarter results in October. Right now, all we can say is this: After a tough second quarter, Ford may be getting back on track in China.