While the results haven't yet shown up on the bottom line, TrueCar has made clear progress in improving its rocky relationships with dealers.

What happened at TrueCar during the quarter?

CEO Chip Perry joined TrueCar late last year after a dramatic management upheaval. Perry has been driving an overhaul of the company in an effort to improve its relationships with dealers. Those relationships had been contentious in the past, so much so that giant AutoNation (AN 2.87%) withdrew its 300 dealerships from the service -- but Perry's efforts are starting to bear fruit.

TrueCar ended the quarter with 10,135 franchise dealer partners, its highest total ever. Better yet, at least from a dealer-relations perspective, AutoNation is back. After considerable negotiation, Perry said, AutoNation agreed to return 55 of its dealerships to the TrueCar network in a pilot program. AutoNation CEO Mike Jackson recently said that he expects all of his company's dealerships to be back in the TrueCar network by the end of the year.

These positive improvements on the dealer front have been accompanied by an increase in traffic to TrueCar's website. The monthly average number of unique visitors to the website rose 12% to 6.7 million year over year.  So far, however, that hasn't translated into significant sales growth: The number of units sold via TrueCar's services grew just 1% versus its year-ago result. 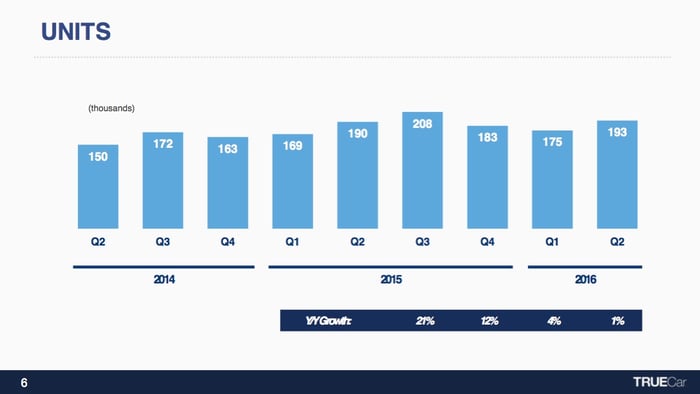 Likewise, TrueCar's transaction revenue was up just 2% year over year. 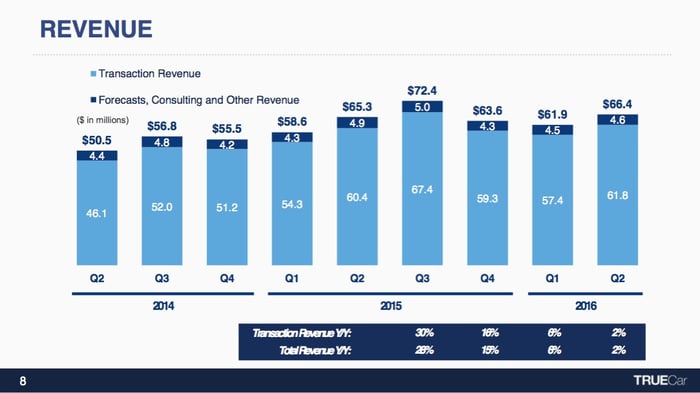 Long story short: Perry's efforts appear to be laying the groundwork for a return to significant growth, but those efforts have yet to make a major impact on sales or revenue.

What TrueCar executives said about the quarter

We made great progress this past quarter. We hit the milestones we set for ourselves in Q2, and we have a solid plan for improvement for the rest of the year. At the halfway point of the year, we have exceeded our revenue expectations while making important investments across the company, and generating significantly more adjusted EBITDA than we estimated. We're operating better, we still have a lot more work to do, but I'm very pleased with the progress so far.

"Transaction revenue per franchise dealer grew about 2% sequentially, which helped us exceed our revenue guidance," CFO Mike Guthrie said during the earnings call. He went on:

However, revenue per franchise dealer is still substantially lower than in prior quarters, so there is significant upside. New dealers on our platform typically have a ramp-up time to sales, and all dealers tend to perform better once we are able to get our teams on-site for training, and so we will continue to hire dealer support and training personnel as fast as we can, in order to improve close rate and continue growing revenue per dealer.

On the cost side, even though we have made substantial investments across the Company, we are spending more efficiently. That has enabled us to generate significantly more adjusted EBITDA in the second quarter.

Looking ahead: Guidance for the remainder of 2016

John Rosevear has no position in any stocks mentioned. The Motley Fool recommends TrueCar. We Fools may not all hold the same opinions, but we all believe that considering a diverse range of insights makes us better investors. The Motley Fool has a disclosure policy.

Why TrueCar's Stock Is Falling Today
395%