These three midsize airlines also stood out as some of the strongest performers among airline stocks last month. Indeed, all three managed to post double-digit share price gains during July. Better-than-expected earnings performances were critical in sending all three stocks soaring. 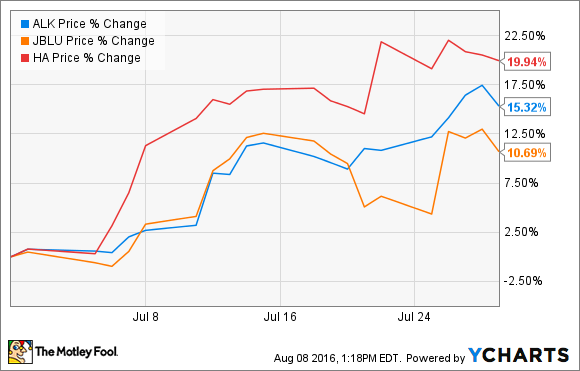 Hawaiian Holdings stock surged 19.9% higher during July, according to data from S&P Global Market Intelligence, giving it one of the best performances in the airline industry. The gains were well-deserved, as Hawaiian posted earnings per share of $1.21 for the quarter, comfortably beating analysts' estimates.

Hawaiian Holdings' strong Q2 EPS growth was driven by an industry-leading 1.6% increase in revenue per available seat mile (RASM). Furthermore, the company expects to continue its revenue outperformance in Q3 -- and in all likelihood in Q4 as well. As a result, analysts' average full-year EPS estimate has risen from $4.55 to $4.89 over the past month.

Looking forward, Hawaiian Holdings has several other notable earnings catalysts. First, the arrival of new A321neo aircraft beginning a year from now will improve the company's fuel efficiency and allow it to better match capacity to demand in individual West Coast-Hawaii markets.

Second, industry capacity is set to decline in the Australia-Hawaii market, which has been one of the weakest parts of Hawaiian's route network recently. That should bolster unit revenue results there. Finally, the strengthening yen is driving strong results for Japan-Hawaii flights, which make up the majority of Hawaiian Airlines' international route network. 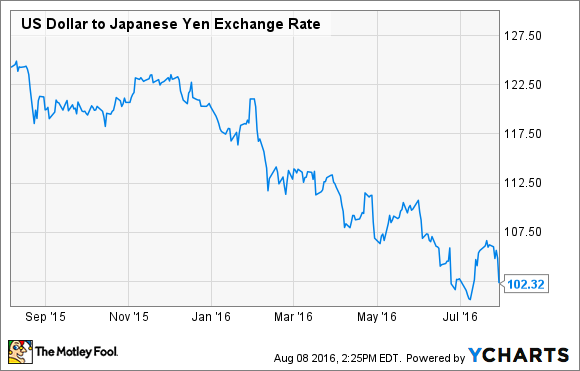 While Alaska Air's unit revenue has been sliding due to rising competition on the West Coast, the company is managing to offset this revenue weakness with relentless cost-cutting initiatives. As a result, the company posted a stellar pre-tax margin of 28.4% in Q2: easily the best in the U.S. airline industry.

As Alaska Airlines' growth slows later this year and becomes more focused on underserved, high-fare markets like Newark Airport, it should be able to stabilize its unit revenue. The company also has multiple initiatives in place to drive ancillary revenue higher. Finally, the pending acquisition of Virgin America will provide both a short-term earnings boost and the potential for long-term EPS growth as synergies materialize.

JetBlue Airways has fallen out of favor with investors over the past year, plunging from a high above $27 last September to less than $15 by late June. However, the stock began to regain its footing in July, rising 10.7% during the month, according to S&P Global Market Intelligence.

Like Hawaiian Holdings and Alaska Air, JetBlue beat analysts' EPS estimates last quarter. Its Q2 EPS came in at $0.53, whereas analysts on average had expected earnings of $0.49 per share.

More importantly, JetBlue's management indicated that the revenue outlook for Q3 is much better than was the case for Q2. For July, RASM probably fell just 2.5%-3% year over year, compared to the 8.2% RASM decline logged last quarter. The rest of the third quarter will be a little weaker, but still better than Q2.

JetBlue Airways is following the industry by reducing its capacity growth plans for the next few quarters. It also plans to roll out its highly acclaimed Mint premium service on numerous transcontinental routes over the next year or two. Both of these developments should help get unit revenue growing again next year.

Low earnings multiples like these are common in the airline industry today, but rare across the rest of the stock market. The rock-bottom valuations indicate that investors are skeptical about airlines' ability to maintain their current level of profit: let alone generate earnings growth.

Yet the strong unit revenue results at Hawaiian Holdings and improving trends at Alaska and JetBlue suggest that all three midsize airlines could continue to generate strong profits going forward. If they can follow through on their potential, patient investors are likely to see solid gains in the next few years.