What: Oil stocks went on a wild ride in July after crude crashed 15% for the month. Drillers with balance-sheet challenges were the hardest hit by crude's slide, with Oasis Petroleum (NYSE:OAS), California Resources (OTC:CRC), Denbury Resources (NYSE:DNR), EP Energy (NYSE:EPE), and Baytex Energy (OTC:BTEG.F) all slumping more than 20%: 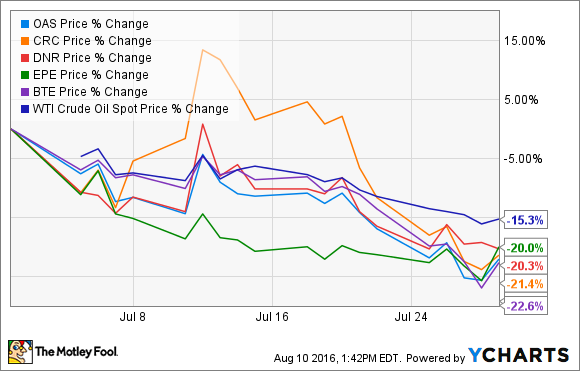 So what: Crude prices crumbled after oil traders got a dose of reality. Not only did supplies start to rebound from recent production outages in Canada and Nigeria, but oil producers in the U.S. began adding back rigs. This renewed fears that the supply overhang was not going to go away anytime soon.

That slump in crude prices was all it took to drive Oasis Petroleum, California Resources, and Denbury Resources down by 20% last month. Traders worried that the drop in crude prices would put further pressure on their balance sheets, which could force these companies to take additional actions to address their financial situations.

California Resources did just that in early August by upsizing its offering to repurchase notes for cash to cut its debt. Meanwhile, analysts at Barclays downgraded Denbury Resources' stock at the beginning of August due to concerns about its balance sheet. Even though the company has reduced its debt by 16% since the end of last year, analysts think its balance sheet still appears stretched, given current oil prices.

Meanwhile, an analyst upgrade of EP Energy was not enough to stop its slide in July. Analysts at KLR Group upgraded EP Energy and several of its peers to buy ahead of their second-quarter earnings reports. While EP Energy would go on to report solid second-quarter results in early August, the renewed weakness in oil prices is forcing the company to focus on its balance sheet by using its excess cash flow to buy back debt.

Finally, Baytex Energy's decent second-quarter results were not enough to stop its slide in July. Unsurprisingly, Baytex Energy's balance sheet was the focus of that report, with the company diverting all of its excess cash to repay debt during the quarter. It was only able to reduce debt by $39 million, which is pocket change compared to its $1.9 billion in net debt. That led the company to make additional announcements to speed debt repayment, including entering into agreements to sell non-core assets, while also cutting its capex budget by 13%

Now what: After riding high for several months, crude oil prices came back to earth in June, taking several oil stocks with it. That's because crude's slide reignited balance-sheet worries across the industry, which is forcing producers to take additional actions to cut debt. Investors can expect these concerns to continue to plague oil stocks until the market is back on solid ground.