A tale of two grocers -- one a big-box retailer selling in bulk at low margins, and the other a high end organic and natural foods grocer achieving industry-leading margins. The two grocers, Costco Wholesale (NASDAQ:COST) and Whole Foods Market (NASDAQ:WFM) have both had incredible success in their respective niche over the last couple of decades, but each is experiencing their own headwinds now. However, one has been outperforming the other lately, and shows that it's better equipped to keep doing so.

Whole Foods was one of the first companies to successfully appeal to a higher-end health conscious demographic at scale. Because of that, it was able to charge more for its items and achieve gross margin around 36%. Compare that to around 20% to 25% gross margin for its low-cost grocery competitors.

As competitors saw the success of the healthier food trend, many have joined in to try and win market share. Larger competitors like Kroger (NYSE:KR), which is expected to overtake Whole Foods as the highest volume seller of organic and natural foods in 2017, have started to cut into Whole Foods' traffic and pricing power. Whole Foods' same store sales growth has dropped from around 7% year over year in 2013 to now down close to 3% in the most recent quarter, while gross profit margin has started to diminish. 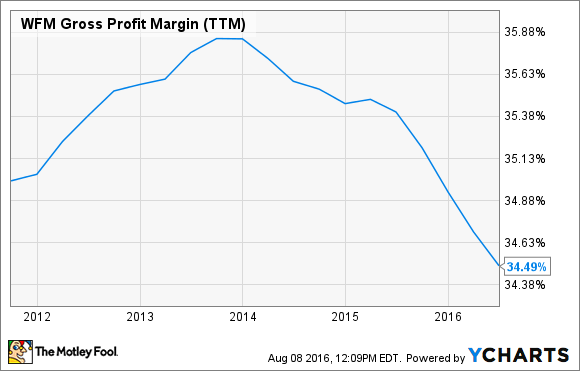 Costco reported flat same store sales as slight growth in the U.S. was offset by declines at international locations due to currency fluctuations. Net sales for the quarter rose 2% year over year.
Some of Costco's slow sales growth seems to be caused by competitive pressure, but most of Costco's issues stem from lower gas prices that have hurt Costco's fuel center revenue over the last two years, while the strengthening dollar has made foreign sales look weak. About a third of Costco's locations are outside of the U.S., making that impact substantial. Costco points out that disregarding its fuel segment and adjusting for currency fluctuations, comparable sales growth for the quarter would be 3%.
Costco's net income growth is still by far better than Whole Foods. For the quarter, earnings per share rose nearly 6% year over year thanks to higher margins and cost cutting. EPS for the last nine months was down, but that mostly seems to have been because of heavy investments in updating the company's digital infrastructure in an attempt to compete more seriously in e-commerce. Either way, by the most recent quarter Costco is far outperforming Whole Foods by earnings growth.

Which shows more promise for growth?

Whole Foods believes increased store count will lead to future earnings growth. There are currently around 450 Whole Foods locations, most of which are in the U.S. Whole Foods believes they can grow that to an eventual 1,200. In fiscal year 2016, Whole Foods opened 38 new stores, about even with the two years prior and what they expect for fiscal year 2017.
One way Whole Foods plans to reach 1,200 stores is with the recently launched "365 by Whole Foods," a long awaited millennial-focused store with smaller floor space, lower prices, more technology for faster checkout, and other changes. The first 365 by Whole Foods store opened near Los Angeles in May, and another near Portland in July. Management plans for 11 more through next year.

Costco also has new store growth to point to as a future earnings growth driver. Costco has just over 700 locations with about a third out of the U.S. Costco plans for another 32 to open this fiscal year. Costco is continuing to develop its brand internationally as well, place a third of those new stores in places like Japan and Australia.

Costco's most expensive membership at $110 per year could increase soon. Image source: Costco

Costco has one more trick up its sleeve -- raising membership rates. Total membership for fiscal 2015 grew 6% year over year to 44.6 million. Costco has raised its membership fees slowly over the last 20 years. It's been nearly five years since Costco last raised fees, and some analysts believe it's due for an increase. A small membership fee increase will provide a substantial earnings boost.

Whole Foods may have something with its new 365 stores, and tripling its store count would likely lead to vastly increased profits. However, the company has only opened two 365 stores so far, meaning the concept is largely untested, and has a long way to go to get anywhere near 1,200 locations.
This is not to say that Whole Foods does not have its own strengths and long term appeal, but Costco's growth story looks more compelling now. Expect Costco to continue increasing membership revenue through new members and higher fees and to continue to be cost conscious to raise earnings per share even more. If oil prices start to tick back up and currency fluctuations stabilize or reverse, expect Costco's income to rise even more.
Costco is more expensive than Whole Foods now by price to earnings at 31 times compared to 21 times for Whole Foods, but there seems to be good reason for that. With more steady earnings growth and more opportunity for growth in the future, Costco looks like the better long term buy.
This article represents the opinion of the writer, who may disagree with the “official” recommendation position of a Motley Fool premium advisory service. We’re motley! Questioning an investing thesis -- even one of our own -- helps us all think critically about investing and make decisions that help us become smarter, happier, and richer.