Ford's Fiesta is one of the best-selling cars in the U.K. Brexit might put a damper on its success -- but overall, Ford's European business is looking very strong. Image source: Ford Motor Company.

Ford Motor Company's (NYSE:F) second-quarter earnings report was a mixed bag. On the one hand, overall profit was off 9%, and Ford shares sold off sharply following the report on concerns about China and a slowing U.S. market.

But there was also some good news for shareholders in the report. One very bright spot: Europe, where Ford has been restructuring since 2012, is now a solid source of profits for the Blue Oval.

It's a happy story. Ford's pre-tax profit in Europe rose to $467 million in the second quarter, up from $161 million a year ago. Rising sales have helped, as have cost cuts. Former CEO Alan Mulally's 2012 restructuring plan for Europe is mostly complete, and now Ford Europe chief Jim Farley is making additional changes to help boost profit margins further.

It's all working. As you can see from this slide from Ford's earnings presentation, nearly every important metric for its European business was up, with the exception of market share. 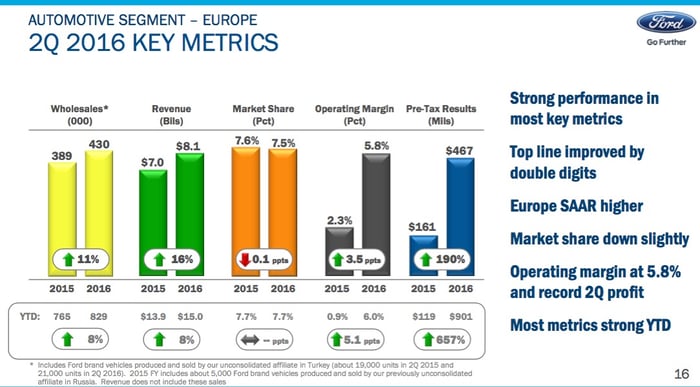 Ford CFO Bob Shanks attributed the slight dip in market share to what he called "market mix." "The Southern European markets grew disproportionately [during the quarter]," he said. "Our share performance there is a little below the average of what it is in Europe [overall], so that affected us."

But that small dip in market share was more than offset by other factors. This next slide shows what factors helped and hurt Ford Europe's second-quarter result versus its performance a year ago. 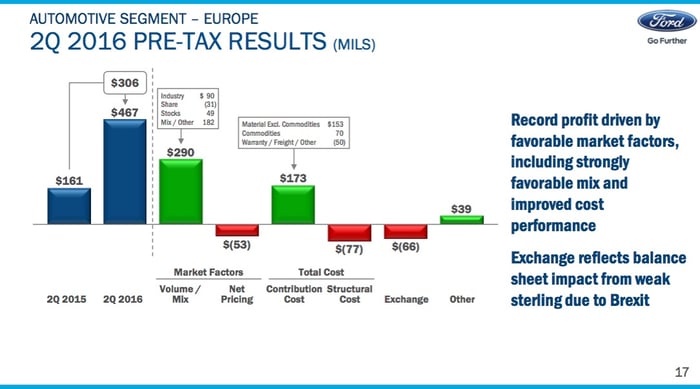 Ford's wholesale shipments in Europe were up 11% in the second quarter, and that had a big positive impact on its results. Ford also saw a gain from "mix," as it's selling more higher-profit upscale models now than it was a year ago. But cost cuts also helped.

"Contribution cost" is Ford's term for costs that vary with its production volumes, such as raw materials and the costs of shipping vehicles to dealers. Within contribution costs, the company generally separates swings in the market prices of commodities such as steel from other materials costs -- for instance, if it reduces its use of a particular material, or gets a better deal from a supplier. That's what we see here.

There is one worrying note on this slide: the $66 million unfavorable swing in "exchange" costs. That's where Ford began talking about its expectations for the effects of "Brexit."

A note of caution from Ford's CFO about Brexit

"This is the first time that you'll see us talking about Brexit," Shanks said.

We had bad news of about $60 million on the balance sheet related to the weak [British pound] sterling.

One of the things that's important to note is that our strategy on hedging for the company is to go into a year with certain of our key currencies completely hedged from an operational exposure point of view. So we came into the year with the sterling and the euro completely hedged. So we don't see any issues relative to the weakness of the sterling on an operating basis for the balance of the year.

But, Shanks said, Brexit will affect Ford in another way: The company is anticipating weakness in the U.K.'s new-car market, where Ford is a leading presence. "We are expecting to have headwinds of about $200 million this year associated with Brexit," Shanks said.

There may also be some unfavorable exchange-rate impacts after this year, as Ford isn't (or at least wasn't as of the conference call) fully hedged against the British pound for 2017 and 2018, Shanks said.

The upshot: A good underlying story regardless of Brexit

The takeaway for shareholders is that while Brexit might have an impact on Ford's results in Europe in the near term, the good news is that the underlying business is looking quite strong. The restructuring effort started by Mulally has turned out to be a success, and Ford is now well-positioned to generate sustainable profits in Europe over the longer term.