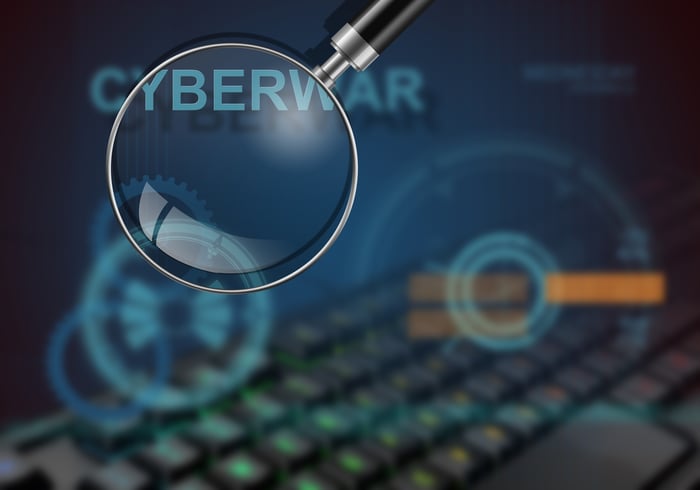 Twice as big as before, Leidos can fight a cyberwar -- and a whole lot more. Image source: Getty Images.

On Nov. 6, 2015, Lockheed finalized its purchase of Sikorsky Helicopters from United Technologies (NYSE:RTX). In so doing, the company put the world's best-selling fighter jet, the best-selling military transport, and the best-selling helicopter all under one roof.

And to complete the company's doubling down on its military hardware business, this week Lockheed finalized the sale of its IT division to Leidos, retired a bunch of stock, and promised to put its sales proceeds to work in its core aerospace businesses. That's great news for Lockheed shareholders, who post-sale have 3% fewer co-shareholders with whom they need to share the profits of Lockheed's renewed focus on rockets, aircraft, helicopters, and spaceships.

But what does it mean for Leidos?

What it means for Leidos

Leidos has actually given investors quite a bit of information on what its business will look like after taking over Lockheed's IT business. It's just that, with Lockheed the much higher-profile company, investors may have focused more on the deal's significance to Lockheed, and not paid as much attention to what it means for Leidos.

Leidos has named its top 10 long-term contracts, including marquee customers like the Pentagon, the Federal Aviation Administration, the Department of Veterans Affairs, and "classified" (presumably, the "No Such Agency"). It's explained how acquiring Lockheed's large healthcare and non-defense, non-security customers will help to balance out its business, deemphasizing defense and security customers (although they still will make up the majority of its revenue) in favor of "civil" clients such as the FAA, Department of Energy, and Veterans Affairs.

And Leidos has provided investors with a lot of numbers that may prove helpful in evaluating its stock's attractiveness, too. So let's take a look at those -- straight from Leidos' filings with the SEC.

Post-merger, Leidos is going to be a much bigger company than the one we used to know. Last year, for example, Leidos booked revenue of $5.2 billion. In fiscal 2017, however, the new-and-improved company says it's likely to book revenue closer to $10 billion.

As for how profitable that revenue will be, that's hard to say. Instead of providing investors with a hard GAAP (generally accepted accounting principles) number, management elected to give its guidance in the form of "adjusted EBITDA" -- a pro forma term that can mean just about anything management likes. According to the company, it expects to earn adjusted EBITDA margins of 9% to 10% in 2017, and $2.90 to $3.20 in "non-GAAP diluted EPS."

On the other hand, management also says it expects to generate operating cash flow -- a number much harder to fudge -- of $475 million or more. And historically, Leidos' capital expenditures have been pretty light -- $50 million or so, according to data from S&P Global Market Intelligence. Thus, it's not inconceivable that Leidos will generate positive free cash flow of $425 million next year.

So what does this mean in terms of valuation? Post-merger, and post-issuance of 77 million new shares in partial payment for Lockheed Martin's IT division, Leidos expects to have 151 million shares outstanding. At the $39.45 share price that investors are currently paying for Leidos stock, that works out to a market capitalization of just under $6 billion.

Additionally, Leidos expects to emerge from its merger with $3.4 billion in net debt. Added to the market cap, that makes for an enterprise value of $9.4 billion.

Isn't that a lot?

Is this a bargain price? It depends on how you look at it. Valued on free cash flow, Leidos stock looks pretty expensive right now -- especially with management saying it only expects to grow sales at about 3% annually going forward. But valued on sales, with or without debt taken into the picture, Leidos actually looks pretty cheap for a defense contractor (although obviously, it's cheaper when you don't look at the debt load, which is pretty steep).

It's worth noting, too, that Leidos' free cash flow guidance could be overly conservative. Consider that last year, without any help from Lockheed Martin's IT business, Leidos generated a cool $335 million in free cash flow on about $5 billion in revenue. Assuming Leidos can, in time, extract the same kind of value from its new Lockheed IT business as it does from its own, it seems reasonable to presume Leidos could generate $670 million -- or with synergies, even a bit more -- as a combined package.

Were Leidos to produce not the $425 million it's promising, but something closer to, say, $700 million, then that would work out to an enterprise value-to-free cash flow ratio of just 14. And at 10% growth, and with a 3.2% dividend yield (Leidos has committed to continuing its $0.32 quarterly dividend payments post-merger), well, in that case, 14 times FCF would seem to be a fair price to pay for the company.

Is Leidos the steal of a deal that it looked like back when its merger with Lockheed was still uncertain, its balance sheet brimming with pre-special-dividend cash, and more free cash flowing in every day? Sadly, no. Based on the numbers as they now look, I have to conclude that Leidos is not the deep-discount bargain it once appeared to be.

But if a lot of things go right, and Leidos delivers on the promises it's making, the stock could still be cheap enough to buy.