Who sells the most? And which is the best stock to buy?

Remember our top 10 fighter jet report that ran a couple weeks back? In it, we ran down the 10 best-selling fighter jets in the world, complete with pretty pictures, fascinating facts, and some deep thoughts about the companies that make the fighter jets. It was a pretty popular piece. 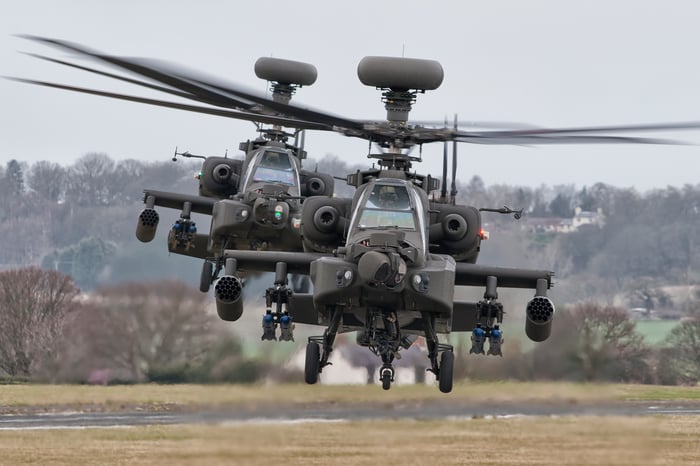 Our follow-up report on the top 10 most popular military transports got a pretty warm reception as well.

But as it turns out, both these articles may have missed the point. While American-made fighter jets and cargo planes are in high demand around the world, there's one other piece of military hardware that foreign buyers like even better:

But which helos are these, who makes them, and what does this all mean for investors?

The sole new arrival on this year's top-10 list of the most popular combat helicopters, published in Flightglobal Insight's World Air Forces 2015 report, is the attack helicopter version of Textron's (TXT 0.99%) old Bell Huey -- the AH-1 Cobra -- of which 550 units are in service globally. Cobras used to provide the Marine Corps with an economical attack platform, but the latest version of the helicopter, the AH-1Z Viper, costs nearly as much as an F-16 fighter jet.

Boosted by sales of its cheaper, earlier-model variants, the AH-1 still ekes out a spot on this year's list. But it remains to be seen whether the AH-1's latest variants can maintain their current 3% market share with a price not much cheaper than that of a full-fledged Apache attack helicopter.

S&P Capital IQ reports that MD Helicopters is privately held -- not publicly traded. The company's versatile MD500 light helicopter serves multiple roles in the U.S. (and other) Armed Forces. There are 675 in use around the world, giving the MD500 a 3% market share.

Gaining popularity, and rising to eighth place on Flightglobal's list, is the Textron Bell 412 utility helicopter. Commanding 4% global market share, 687 Bell 412s are in service today -- including at least three reported to be serving as the Filipino equivalent of "Marine One," ferrying the president of the Philippines from place to place.

The ranks of OH-58 Kiowas are dwindling, with 6% fewer units (712 in all) flying this year than last, and global market share dropping to 4%. And this is just the start. The U.S. Army plans to retire its entire Kiowa fleet, substituting in Apaches to handle the Kiowa's light attack helicopter mission.

Boeing's (BA 2.03%)famed CH-47 Chinook drops one slot in this year's rankings. At last report, only 876 Chinooks remain in service today -- 7% fewer than last year. Global market share of the Chinook has likewise dropped to just 4%.

Moving up one spot in the rankings this year is Russia's most famous helicopter (albeit not its best-selling -- see below), the Mi-24 Hind. Owed in part to Russia's recent military buildup, the ranks of Hinds have grown 3% since last year. The helo now commands 5% global market share with 897 units in service.

Retaining its fourth-place position for the second year running is Boeing's ever-popular Apache attack helicopter. There are 1,083 of them in service globally today, 7% more than last year, and the helicopter has 6% market share. Adding to Boeing's revenue stream is the continuing need to refurbish, upgrade, and remanufacture this huge existing fleet of aircraft.

Placing third in this race is Textron's venerable UH-1 Huey utility helicopter. A certified Vietnam vet, Textron has produced more than 16,000 copies of the Huey and its successor aircraft, including the latest model UH-1Y Venom (price indicated above). There are 1,452 Huey variants in service today, giving the helicopter 7% global market share.

That's still 1,159 fewer Hips than Black Hawks floating around, however, keeping the Mi-8 in second place on Flightglobal's list, and still behind the world's absolute No. 1 best-selling military helicopter...

The most popular military helicopter on the planet, United Technologies' (RTX 0.55%) Black Hawk (and its derivatives) boasts an 18% global market share. That's a bigger share than Lockheed Martin's F-16 commands in the fighter jet market.

According to Flightglobal, 3,600 Black Hawks are flying today -- 8% more than just one year ago.

Why investors care about military helicopters
So why is all this important to investors in the defense industry? It works like this: The more helicopters a company sells, the broader the base over which it can spread research and development costs, and the less it can charge per helo.

The lower the cost, the cheaper the helicopter.

And the cheaper the helicopter, the easier it is to sell more helicopters, growing market share further, and expanding profit margins.

United Technologies has sold more than 4,700 Black Hawk-family helicopters -- and amazingly, at prices that are far from cheap. Of these, nearly 70% are still flying today, and continuing to generate even more maintenance, parts, and upgrades revenues for UTC. All of which sound pretty good -- and are about to get even better.

You see, while buyers are pretty impressed with Sikorsky's Black Hawk, parent company United Technologies apparently is not -- and is planning to sell or spin off Sikorsky. As a result, pretty soon, defense industry investors could have the opportunity to own the world's leading manufacturer of military helicopters and nothing else.

Freed from its conglomerate parent, which makes everything from elevators to HVAC systems, Sikorsky would constitute a pure play on its premier product: A military helicopter-maker that earns (in most years) better profit margins than does Boeing's rival Military Aircraft business.

What's more, if Sikorsky should split off from United Technologies, and then tie up with Textron and its Bell Helicopter division (which earns even higher profit margins than Boeing or Sikorsky), the result would be a true titan in the military helicopters industry, boasting not just the fattest profit margins, but the greatest sales numbers as well -- and half the best-performing helicopter brands on the planet. Knowing which option to hope for comes down to knowing who's who in the military helicopters market.

And now you do.

Did I mention that Sikorsky has won the contract to build the next "Marine One"? If Sikorsky is good enough for the U.S. President, shouldn't it be good for you, too? Photo source: United Technologies.

Rich Smith does not own shares of, nor is he short, any company named above. You can find him on CAPS, publicly pontificating under the handle TMFDitty, where he's currently ranked No. 359 out of more than 75,000 rated members.