Low prices mean high sales volume means high profits. So, what does that tell us about too-expensive warplanes?

Got hundreds of millions of dollars to toss around? Then like the U.S. government, you can hire Lockheed Martin (LMT 2.64%) to design and build you an F-22 Raptor stealth fighter -- widely considered the most capable air superiority combat jet in the world. (Of course, if you cut your production run short before efficiencies of scale kick in, the planes end up costing $412 million apiece).

Alternatively, that same money will buy you a whole handful of Boeing's (BA -1.25%) perfectly serviceable fourth-generation F/A-18 or F-15 fighter jets, retailing for about $100 million a pop.

Depending on what a nation needs, various buyers pick various warplanes, and various price points. But which are the most popular combinations today? Let's find out, beginning with a really old picture of number...

10. Chengdu J-7 Fishbed (no longer in production)
Making its first appearance at No. 10 in this year's Flightglobal Insight "World Air Forces 2015" report is the Chinese J-7 fighter jet. It's actually China's version of the old Soviet MiG-21, and is no longer produced. Still, 418 remain in service, giving the fighter a 3% global market share.

9. Chengdu F-7 Airguard -- List price: $2 million-$3 million
The export version of China's J-7 is dubbed F-7, and it's likewise a twin to Russia's MiG-21. F-7 numbers have suffered no attrition at all over the past 12 months. One year ago, 460 were in service around the globe. Today, each and every one is still flying, giving the F-7 a 3% market share as well.

8. Northrop Grumman F-5 Tiger -- List price: $20 million to $25 million (estimated)
After two dozen retirements over the past year, only 468 Northrop F-5 Tigers are still flying. The plane's no longer in production, but retains a 3% market share. Website AircraftCompare.com estimates that if the Tiger were produced today, it would probably cost somewhere in the low-$20 million range.

7. Sukhoi Su-25 Frogfoot -- List price: $11 million
Russia's answer to the American A-10 Thunderbolt II "Warthog," the Su-25 is a dedicated "tank-buster" aircraft. It's also apparently nearly as popular as the Warthog. Over the past year, only one single Su-25 has been retired.

With 506 planes still in service, it too holds a 3% market share. With a new variant now in production -- the Su-39 -- the Frogfoot just might hop higher in future rankings.

The MiG-21 still commands a 5% market share. And if you added up all of its "twins" -- the Chinese J-7s and F-7s still flying around -- there would be 1,546 MiG-21 lookalikes in service, and its market share would double.

5. Mikoyan-Gurevich MiG-29 Fulcrum -- List price: $40 million
Moscow's most advanced MiG has seen its market share shrink to 5% (793 planes). That's enough of a drop to drop MiGs to fifth place in the rankings. A new variant (MiG-35D) is expected to become operational in 2016, however, and may perk up MiG's prospects -- so stay tuned.

3. Sukhoi Su-27 Flanker -- List price: $22 million
Russia's most popular fighter jet, the Su-27 Flanker, continued its march up the rankings this year -- and one reason for this may be its low cost. "Helped" by a declining ruble, Su-27's most advanced model, dubbed the Su-35 Flanker-E, costs a mere $22 million per copy according to the military aircraft experts at deagel.com.

2. Boeing F-18 Hornet -- List price: $92 million
Likewise retaining its No. 2 position in the market, Boeing's F-18 fighter jet, in its many iterations, commands 7% market share globally. In 2015, the population of F-18 fighter jets in world air forces grew to 1,046 planes in service. 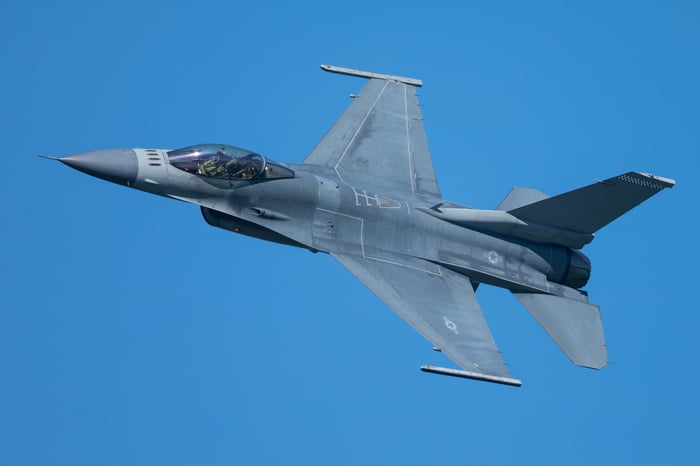 1. Lockheed Martin F-16 Falcon -- List Price: $34 million
And last (first?), but not least, for the second year running, Lockheed Martin's modestly priced F-16 Falcon tops the rankings in this year's edition of Flightglobal's report. With 2,242 planes in active service, the F-16 is still the most popular fighter jet on the planet, making up 15% of the world's air forces.

And the cheaper the plane, the easier it is to sell more planes, growing market share further. The effect thus snowballs.

Are you with me so far? Now, Lockheed Martin has sold more than 4,500 F-16s around the world. That's not surprising. After all, it's one of the most cost-effective warplanes in our inventory. (Note, too, that Russia has sold even more of its even cheaper MiG-21s.)

Half of Lockheed's F-16s are still flying, and generating services, maintenance, and upgrades revenue for Lockheed, and earning its shareholders 11% profit margins on this revenue.

Yet the aircraft that Lockheed hopes will become the F-16's successor, the F-35 stealth fighter jet, costs more than three times as much as an F-16. Indeed, certain versions of the F-35 could cost nearly five times as much as an F-16. At prices as high as $150 million per copy, the question becomes: Can Lockheed Martin maintain its global market share dominance in the face of much cheaper fighter jet offerings from Russia and China?

Personally, I have my doubts. Sure, if all goes as planned, and Lockheed Martin succeeds in selling more than 3,000 of its F-35s over the next 60 years, then the plane's current high price tag could generate a lot of profit for Lockheed. But if Lockheed doesn't sell them fast enough, and bring the price down fast enough to attract buyers, then one day soon, this top-10 list of the world's most popular fighter jets is going to look a lot different.

And Lockheed Martin is going to look a lot less profitable.