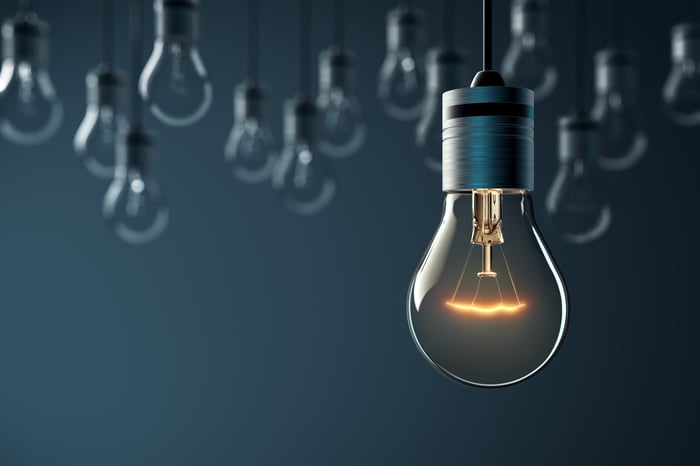 When you think about Tesla's (NASDAQ:TSLA) competitors, you probably think of car companies like Ford or General Motors, or tech giants entering the automotive space, like Apple's not-quite-a-secret project Titan. You probably don't think of industrial stalwart General Electric (NYSE:GE).

Certainly, Tesla's primary product -- electric passenger vehicles -- and GE's -- industrial equipment like gas turbines and aircraft engines -- don't really overlap. But GE has just taken a stake in a company that is not only a Tesla competitor, but is leading Tesla in a critical market. Should investors in tiny Tesla be concerned about the advancing GE juggernaut?

The company in question here is Germany's (officially lowercased) sonnen, which manufactures "residential lithium storage systems" (read: batteries to store energy from home solar-energy systems). Sonnen's premier product, the "sonnenBatterie," is a smart storage system for solar energy. To date, it has been installed in more than 10,000 homes across the globe, even more than Tesla's much-trumpeted PowerWall.

sonnen's success to date has been largely limited to Europe, where it is the leading battery-system purveyor. But the company has begun aggressively expanding into North America. In January sonnen opened a headquarters in Los Angeles, and it has developed partnerships with more than 30 U.S. solar-panel installers to offer solar storage packages for residential customers; it plans to expand that to 100 partnerships by the end of the year.

Even so, sonnen is still a small company with an even smaller U.S. presence. On its own, it might be a Tesla rival, but not a serious threat -- which is why its new partnership with GE is of concern.

Tesla is one small company with lots of big rivals. Naturally, it's nowhere near as large as the big car companies, but it lags behind its tech rivals as well:

As you can see, GE absolutely dominates Tesla in the size department. Not only that, but GE has a lot of cash to throw at new technologies, while Tesla does not. At the end of its second quarter, GE had $91.8 billion in cash on its balance sheet. By contrast, Tesla's total assets (cash, equipment, inventory: everything) only totaled $11.9 billion at the end of its second quarter; just $3.3 billion of that was in cash.

And it's not like Tesla can simply devote all of its resources to investments in battery technology. The company makes most of its money by selling cars, and needs to invest heavily in that side of the business to keep its edge. Its well-capitalized rivals are already hoping to take a bite out of its market for luxury electric vehicles; Daimler, for example, just introduced the concept electric Vision Mercedes-Maybach 6 on August 19.

The last thing Tesla needs is more competition in its battery space as well.

Luckily for Tesla, GE has only had limited success with its previous battery efforts. It's invested millions of dollars in industrial battery technology, but scaled back those efforts late last year due to longevity concerns.

By teaming up with sonnen, though, GE is putting its money behind an already viable residential product. And while there's no word on exactly how the companies might collaborate on future battery technology, GE surely expects its "mid double-digit million-euro" investment to bear fruit.

You could say that Tesla is being ganged up on by a bunch of bigger foes, and you wouldn't be wrong. Competition in its big markets of electric vehicles and battery storage systems, both of which were negligible a few years ago, has exploded recently. And while the company still has many advantages, like first-mover status and an enviable brand, it's clear that the competition in these industries is only going to get more intense.

For now, though, the market just isn't large enough to declare Tesla a loser in the residential battery storage market...or even to call it an underdog. Its system currently appears to be cheaper than sonnen's, and it should be able to achieve new economies of scale when its Gigafactory in northern Nevada -- which has already begun manufacturing PowerWalls -- comes fully online next year. The Gigafactory is a joint venture with Panasonic, showing that Tesla can attract heavy hitters of its own.

Savvy investors, though, will keep a careful eye on battery developments at sonnen and GE, to make sure they don't start undermining Tesla's PowerWall technology. Otherwise it might be "lights out" for this particular Tesla product.