Gunmaker Smith & Wesson (NASDAQ:SWBI) might seem like a lucrative investment, as fears of tighter gun-control laws spark higher firearm sales across America. After all, the number of NICS background checks for gun purchases has risen year over year for 15 consecutive months, indicating that sales are likely to remain strong through the November elections. 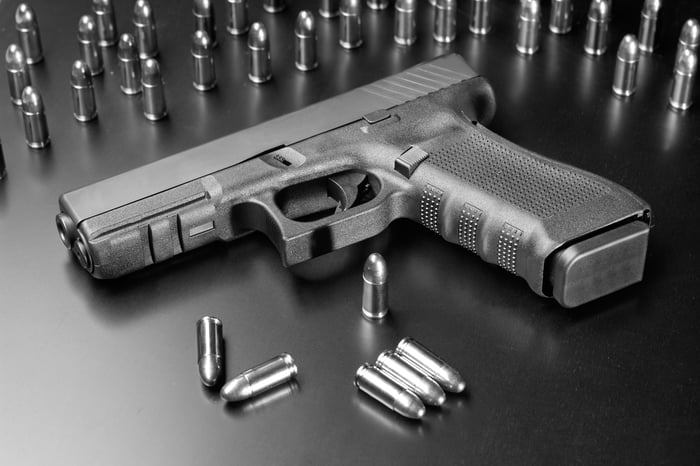 But as I mentioned in a previous article, gun sales are cyclical and frequently fueled by high-profile shootings and threats of government intervention. Moreover, Smith & Wesson has already rallied 75% over the past 12 months to all-time highs, raising questions about the stock's upside potential. The company also doesn't pay a dividend and hasn't launched any new buyback programs. Therefore, let's examine two other self-defense stocks that might have more upside potential than Smith & Wesson.

Smith & Wesson's growth was notably boosted by its acquisition of accessories maker Battenfeld Technologies. That purchase boosted its accessories revenue, which accounted for 8% of its sales, by 20% last quarter. Smith & Wesson's firearm sales were also boosted by stronger demand for assault weapons, which face potential bans in the United States. But those bans should have less of an impact on Ruger, which sells fewer assault weapons than Smith & Wesson.

Ruger also pays a dividend yield of 2.5%, which used up 37% of its free cash flow over the past 12 months. The company's payout varies from quarter to quarter because it pays out roughly 40% of its net income as dividends, instead of sticking with a fixed quarterly rate. Therefore, Ruger's cheaper price-to-earnings multiple, its lower exposure to the assault-weapon market, and its dividend make it a more stable firearm play than Smith & Wesson.

Shares of Taser International (NASDAQ:AXON) have rallied 34% over the past 12 months because of the rise in fatal police shootings across America. That's because police widely use its namesake electrical weapons, and its Axon body cams are now becoming standard police equipment in many cities.

Taser posted 26% year-over-year sales growth last quarter, compared with 24% growth in the previous quarter and 26% growth in the prior-year quarter. Sales of Taser weapons rose 20% to $45.5 million, while sales of Axon devices surged 49% to $13.2 million. At the end of the quarter, 34 major city law-enforcement agencies had purchased Axon body cams or its digital evidence management software. Analysts expect Taser to post 21% sales growth for the full year, up from 20% growth last year.

However, Taser hasn't been doing as well on the bottom line. Net income fell 39% to $3.7 million last quarter as lower-margin Axon devices weighed down its gross margins, and a higher headcount caused R&D expenses to spike. Analysts expect these growing pains to cause Taser's earnings to decline 25% for the full year. But looking ahead, analysts expect Taser to grow its earnings by 63% next year and an average of 30% per year over the next five years.

Taser stock isn't cheap, at 114 times earnings and 65 times forward earnings. But if the company can keep posting double-digit sales growth, reach additional law-enforcement agencies, and gradually reduce expenses, its bottom-line growth should stabilize. Therefore, I believe Taser is a better growth play than Smith & Wesson, and sales of its core products are unlikely to be throttled by new laws.

Sturm, Ruger and Taser both have unique strengths, but that doesn't mean Smith & Wesson is a bad investment. Its price-to-earnings multiple is still lower than the industry average of 19 and its five-year PEG ratio sits at 1, indicating that it's fairly valued relative to its potential earnings growth.

However, investors should carefully compare these three stocks to see which one fits their investment needs -- Smith & Wesson is a play on higher assault weapon sales, Ruger is a more conservative income investment, and Taser is a higher growth one on non-lethal weapons and body cams.