Please ensure Javascript is enabled for purposes of website accessibility
Log In Help Join The Motley Fool
Free Article Join Over 1 Million Premium Members And Get More In-Depth Stock Guidance and Research
By Eric Volkman - Aug 29, 2016 at 8:20AM

Bye-bye, Q2 earnings season. It was nice to know you. For many investors, it was particularly nice because a raft of dividend raises was declared (dividends are often announced within or concurrent to quarterly results). 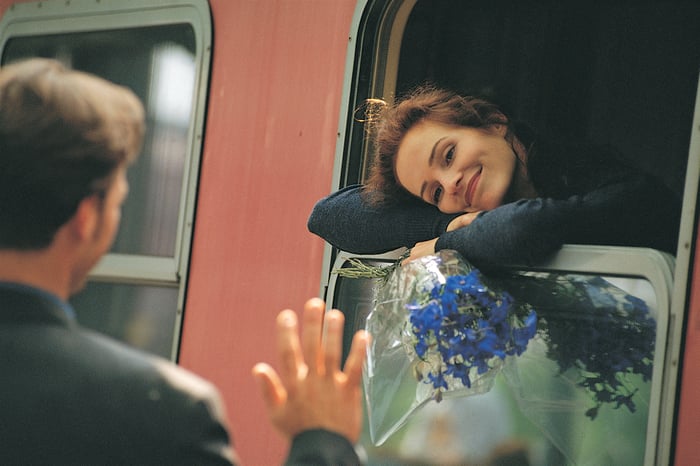 So, now we're in the slog, a fairly inactive period as far as payout lifts are concerned. We saw very few hikes last week, and that's sure to repeat at least once before Q3 earnings season starts to heat up. Meanwhile, here's the promised pair of raisers from the last few days:

The tobacco industry might have its detractors, but it's a longtime favorite of income investors. It has a strong customer base, to put it mildly. It's also usually very profitable and tends to throw off a great deal of cash.

Case in point, Altria Group (MO 1.67%), which in one corporate form or another has been booking a tidy profit and paying out chunks of it to shareholders for a very long time. The upcoming quarterly will be a little chunkier than its predecessor, by 8% at $0.61 per share.

In this increasingly health-conscious world we live in, the cigarette business has become tougher for the companies involved in it. Despite that, Altria has done a fine job of boosting profitability lately -- its bottom line rose a sturdy 14% on a year-over-year basis in its most recently reported quarter, although revenue saw a 1% drop. 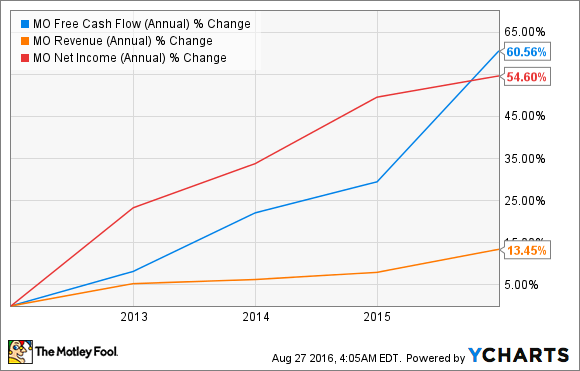 The good performance has boosted annual operating and free cash flow, both of which have increased notably over the past few years. The most recent FCF figure was more than enough to cover Altria's payout. This is a successful company that loves its dividend, and I think it'll continue to raise it well into the future.

Altria's new distribution will be handed out on Oct. 11 to stockholders of record as of Sept. 15. At the current share price, it would yield 3.7%, well above the current 2.1% average of dividend-paying stocks on the S&P 500.

Like Altria, pharmaceuticals and performance chemicals concern Aceto (ACET) has lifted its quarterly dividend by 8% -- its first raise since 2013. Going forward, the company will pay almost $0.07 per share.

Yet despite a fiscal 2016 that saw gains in revenue and profitability, the company's Q4 had some worrying minus signs. The quarter's net sales fell by 8% (to $135 million), while bottom line saw a queasy drop of 50% to almost $14 million.

Aceto attributed the quarterly declines to increased competition in its generics business, Rising Pharmaceuticals. This is particularly impactful as the unit is part of the company's top division by revenue, Human Health.

According to the company, a burst of new product launches next year should boost sales and earnings in the mid-single-digit percentage range. The market, though, doesn't seem to agree as it traded Aceto stock down by over 21% after the news release hit the wire.

Meanwhile, over the years, the company's cash flow figure has been a real seesaw, with many peaks and valleys. Although the dividend has been more or less stabilized of late, it's also had its erratic, up-and-down trajectory at times. 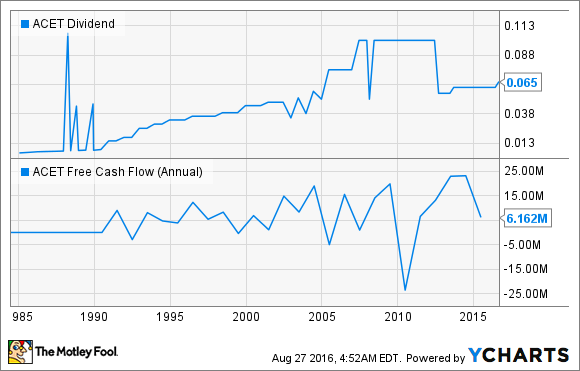 Considering all that, I'm not sure I'd depend on the company to maintain or grow the payout in the coming years.

Aceto's upcoming dividend will be dispensed on Sept. 20 to shareholders of record as of Sept. 9. At the stock's most recent closing price, the new amount would yield 1.3%.