If you're thinking about investing money for your children, you could do a lot worse than following in the footsteps of Warren Buffett. The multibillionaire is arguably the world's best investor, and his bargain-bin, buy-and-hold approach matches up nicely with a long-haul timeline. Are these three Warren Buffett stocks a good fit for your children's portfolio?

Warren Buffett's Berkshire Hathaway (NYSE:BRK.A) (NYSE:BRK.B) invests more than $130 billion in stocks, and the consumer electronics and media content giant Apple Inc. (NASDAQ:AAPL) is one of Berkshire's most recent buys.

Berkshire Hathaway's aggressively been buying Apple since January and as a result, Berkshire now owns 15.2 million shares that are worth an eye-popping $1.6 billion.

Berkshire's inclusion of Apple in its portfolio suggests that Berkshire's portfolio managers, Todd Combs and Ted Weschler, think that right now Apple offers investors a market-beating balance of risk and reward. Despite Apple's shares falling out of favor because of a sales slowdown this past year, Apple's iPhones, iPads, and Macs are still considered by many to be the best products on the planet. The recent slowing in sales is due largely to Apple fans holding off on upgrading their devices, but that's unlikely to last too much longer. Apple expects that most consumers will only keep their existing phones for about three years, which means that many iPhone 5's are getting a bit long in the tooth.

Since Apple products still elicit awe-inspiring loyalty among consumers and Apple continues to deliver plenty of shareholder-friendly cash flow via iTunes, picking up shares could make a lot of sense right now. Apple's forward price-to-earnings ratio is only 12.2, suggesting that shares aren't overly pricey. Apple's fortress balance sheet and the potential for upgrades in the next year could make this an especially good stock to stash away for your kids.

Warren Buffett's Berkshire was one of the first big investors to cut ties with energy stocks when commodity prices fell, yet he still owns a big -- and growing -- stake in Phillips 66 (NYSE:PSX), an oil and gas transport, storage, refining, and marketing company.

Berkshire Hathaway came into 2016 owning 55.4 million shares of Phillips 66, or 10.5% of the company; thanks to recent buys, Berkshire's stake stood at 78.8 million shares as of June.

While no one, including Buffett, knows when oil and natural gas prices will rise, the Oracle's supersize position in Phillips 66 suggests he thinks the company can profit regardless of where energy prices are heading. That thinking is supported by Phillips 66's ongoing ability to put up profit this year. In the first quarter, Phillips 66 earned $385 million, and in the second quarter, it earned another $496 million. That's pretty remarkable considering how sharply oil and gas prices have fallen over the past two years.

Global energy demand is expected to grow, not shrink, in the coming decades, and that could help propel earnings higher over time. So picking up Phillips 66 now, when the industry is struggling, may be savvy -- especially if the company continues to reward investors with a 3.2% dividend yield.

A global food giant to stock up on

Buffett's Berkshire Hathaway and the activist fund 3G Capital became the majority owners of The Kraft Heinz Company (NASDAQ:KHC) after they orchestrated the successful merger of the two food giants in 2015.

Berkshire Hathaway owns $28.7 billion worth of Kraft Heinz stock, which suggests Buffett has a lot of faith in 3G Capital's ability to reinvigorate profit at this company. The Brazilian investment firm has a track record of unlocking value by cutting costs, and it seems that their expense reduction plans are already paying off at Kraft Heinz. By eliminating jobs and executive perks, 3G Capital expects to generate $1.5 billion in annualized cost savings by the end of 2017. In the past year, both gross margin and operating margin have indicated that the company is executing on that forecast. 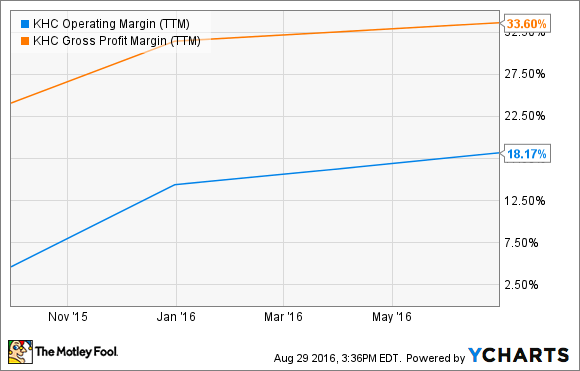 Profitability will also get support from the company's recent move to reduce interest expense by paying off high-cost debt, including $8 billion in preferred shares yielding 9% that are owned by Berkshire Hathaway. Retiring those shares means Buffett will lose out on a nice stream of income in the short term, but over the long haul, this is a smart move for Kraft Heinz investors.

As cash flow at the mac-and-cheese and ketchup maker improves, the company will have more financial flexibility to invest in product development and to buy competitors. Better cash flow could also give Kraft Heinz room to boost its dividend, which already yields a respectable 2.7%.

Admittedly, Kraft Heinz isn't going to be a high-growth barn-burner, but "Steady Eddie" revenue and better-than-industry earnings growth could make this a tasty addition to your children's portfolio.

3 Warren Buffett Stocks You Can Stash Away For Your Kids @themotleyfool #stocks $AAPL $PSX $KHC $BRK.A $BRK.B Next Article
Current