Shipping company dividends can be as choppy as the seas. Like a rising tide, these dividends often grow during good times, but more often than not they crash when the shipping sector hits a rough patch. That certainly has been the case for Seaspan Corporation (NYSE:ATCO) and fellow containership lessors Danaos (NYSE:DAC) and Costamare (NYSE: CMRE) in the past: 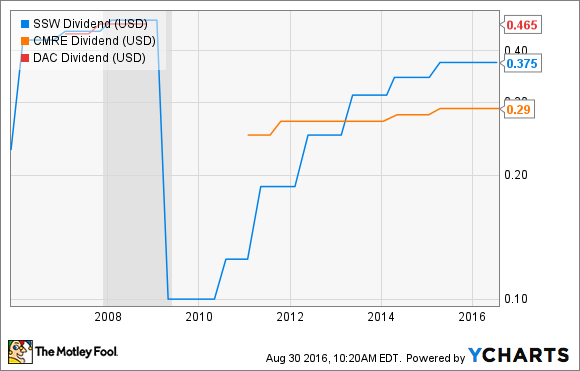 The question is whether or not Seaspan Corporation's dividend faces the same fate today given the current troubles in the shipping sector. It already chose to hold its dividend flat this year, which makes dividend growth in 2017 questionable at best. Here's a look at both the bull and bear case for the dividend.

The bear case: The dividend gets cut

Slowing global trade growth is cutting into shipping company profits. Times are so tough for some operators that they are working to restructure their financial commitments, including charters for container ships. For example, Hyundai Merchant Marine recently entered into a transaction that effectively wiped out its existing shareholders to obtain some financial relief. Danos was part of that solution, with it agreeing to reduce charter rates by 20% for the next three and a half years in exchange for debt and equity in the newly recapitalized company. According to reports, Hyundai sought a similar charter reduction from Seaspan Corporation, but it refused to throw that customer a lifeline.

More concerning is the current creditor negotiations with Hanjin Shipping, which leased seven ships from Seaspan Corporation. According to reports, Seaspan Corporation finally relented and agreed to cut its rates to the troubled South Korean shipper. The agreement would reduce Hanjin's rate by $711.9 million over the life of the contracts. That said, even more recent reports suggest that Hanjin is nearing bankruptcy after other creditors refused to provide support.

Needless to say, the troubled shipping sector has the potential to impact Seaspan Corporation's cash flow going forward, making it very tough for the company to increase its dividend next year. That is one reason why rival Costamare recently implemented a dividend reinvestment plan, offering its investors stock in place of a cash dividend. That said, Costamare will "continue reviewing our dividend policy based on market conditions and our liquidity requirements" and that review could result in a dividend cut or suspension. While Seaspan's dividend is not publicly under review at the moment, given the sector's troubles there is no doubt that the company is weighing its options, which could include a dividend cut next year.

The bull case: The dividend gets a boost

Times are tough in the shipping sector, which is putting a spotlight on Seaspan Corporation's ability to maintain, let alone grow its dividend. However, at the moment the company remains committed to maintaining its dividend this year. The reason it is confident boils down to three things:

Further, Seaspan Corporation's cash flow projects to grow even more next year because it has eight vessels scheduled for delivery, six of which are under long-term time charters. Further, given its broad access to capital, it has the bulk of the funding in place to pay for its remaining newbuild requirements. These factors suggest that the company has more than enough cash flow to boost the dividend next year, even if times remain tough in the shipping sector.

That said, given the troubles in the shipping sector, especially the looming bankruptcy of one of Seaspan Corporation's customers, I would not bank on this payout heading higher next year. The fact that the company kept its dividend flat this year shows that it is cautious amid the current environment. Moreover, a dividend reduction is not out of the question if the company needed to preserve cash for other opportunities such as vessel acquisitions. At the moment a payout reduction does not seem necessary because it has had open access to the capital market. However, if that access dries up, the dividend might need to come down to ensure that Seaspan stays afloat.