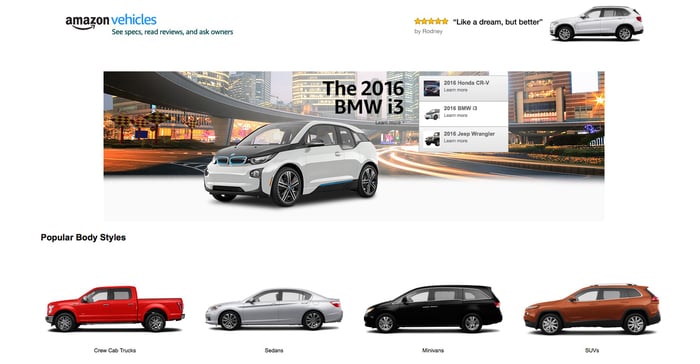 Amazon.com (NASDAQ:AMZN) surprised the auto industry with its launch of a new portal last week. The new Amazon Vehicles allows consumers to view details on hundreds of new and classic cars.

Amazon is the 800-pound gorilla of online shopping, but the new portal doesn't allow vehicle purchases -- at least, not yet. But the new site is a sign that Amazon is thinking about ways to insert itself into the car-sales process, and that has implications for a lot of players in the business of cars.

What Amazon Vehicles is and isn't -- yet

Right now, Amazon Vehicles is just a "car research destination and automotive community," as the company says. Users can find images, videos, specifications, and customer reviews of many new, used, and classic cars. Users can also leave car-related questions for others to answer -- and can leave reviews of cars they've owned.

While the size of Amazon's huge user base is unique, a lot of the content seems to duplicate what sites like Edmunds's and Kelley Blue Book already provide. And there's no obvious revenue source for Amazon in the site as it is today.

Where is Amazon going with this?

As I said above, Amazon is probably exploring the idea of inserting itself into the car-buying process in some way. The most obvious model is that of TrueCar (NASDAQ:TRUE), an online car-shopping service that matches buyers with dealers that have agreed to honor a no-haggle price.

Does that sound like trouble for TrueCar? Let's put it this way: Here's a chart showing TrueCar's stock price over the last few weeks. Can you tell when Amazon Vehicles was launched? 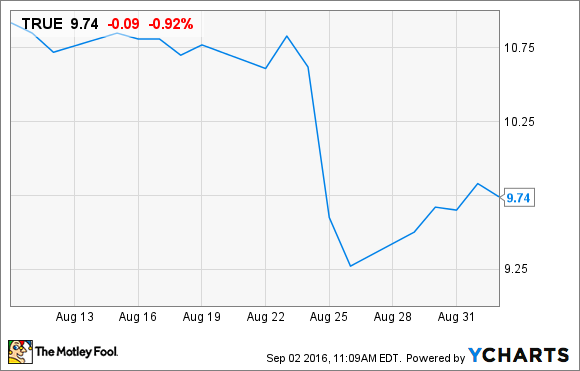 TrueCar's shares dropped 14% in the wake of the Amazon Vehicles launch. The concern for TrueCar investors is obviously Amazon's scale and market power. While TrueCar is doing well with an average of 6.7 million unique visitors per month last quarter, Amazon is one of the most-visited web sites in the world with roughly 300 million active users.

How Amazon could shake up the way we buy cars

The conclusion is obvious: If Amazon were to decide to muscle into TrueCar's turf, it would probably be a short battle. While TrueCar has had to persuade and cajole dealers into joining its network, Amazon's dominant market presence could make it a blunt choice for dealers: Join the network, and be prepared to compete aggressively on price -- or be left out.

That would be tough for dealers. For consumers, on the other hand, it might be a boon. Tesla Motors' (NASDAQ:TSLA) direct-sales model has demonstrated that no-haggle car shopping has a lot of appeal. It has also shown that the franchise-car-dealer model is ripe for some sort of disruption.

The only thing missing is a "Buy it Now" button. It may not be missing for long. Image source: Amazon.

That disruption won't come from the automakers themselves. State laws protecting car dealers effectively make it impossible for the big automakers to follow Tesla's lead and sell directly to U.S. consumers. That's the opportunity that TrueCar's founders saw, and TrueCar has had some limited success in exploiting it.

But if Amazon were to step in and effectively force dealers to sell at set prices to Amazon's huge customer base, it could turn out to be hugely popular with consumers -- and could genuinely transform the way we buy new cars. (Not incidentally, it would also give Amazon a fat new revenue stream: TrueCar made an average of $321 per transaction last quarter.)

Is that where Amazon is going with this? It seems likely. Stay tuned.