Please ensure Javascript is enabled for purposes of website accessibility
Log In Help Join The Motley Fool
Free Article Join Over 1 Million Premium Members And Get More In-Depth Stock Guidance and Research
By John Rosevear – Sep 4, 2016 at 11:32AM

CEO Elon Musk told Tesla employees to cut spending and make as many cars as possible before quarter's end. The reason: He wants to boost Tesla's share price ahead of yet another equity offering.

The effort to develop and produce the compact Model 3 sedan is just one of several cash-torching Tesla initiatives under way now. The company has signaled that it will seek to raise additional funds before the end of the year. Image source: Tesla Motors.

Tesla Motors (TSLA -0.19%) CEO Elon Musk is urging employees to cut spending and build as many cars as possible before the end of the third quarter, in an effort to show positive cash flow and persuade investors to continue to fund Tesla's aggressive business plan.

In a Friday-evening scoop, Bloomberg's Dana Hull reported that Musk sent an email to Tesla employees saying that the company's third-quarter results would be its last chance to show improved financial numbers before its next round of fundraising.

According to the Bloomberg report, Musk said in the email that Tesla is "on the razor's edge of achieving a good Q3, but it requires building and delivering every car we possibly can, while simultaneously trimming any cost that isn't critical, at least for the next 4.5 weeks."

"The simple reality of it is that we will be in a far better position to convince potential investors to bet on us if the headline is not 'Tesla Loses Money Again,' but rather 'Tesla Defies All Expectations and Achieves Profitability,'" Musk wrote.

Musk's email was sent to Tesla employees on Aug. 29.

Tesla is going to need a lot of additional cash, soon

In a filing with the Securities and Exchange Commission on Aug. 31, Tesla said that it's planning to raise funds "through potential equity or debt offerings" before the end of 2016:

Part of the challenge is that Tesla is currently asking its shareholders to approve the acquisition of solar-panel maker Solar City (SCTY.DL), a company run by Musk's cousins. Solar City has been struggling, posting big losses. It currently has $3.35 billion in debt. Tesla burned $2.2 billion last year and other $611 million in the first half of 2016; that burn rate will increase, at least for a while, after Solar City's operations are folded in.

This will be Tesla's second trip to the capital markets in 2016. Tesla raised $1.7 billion with an issue of new shares of stock in May. It ended the second quarter with $3.25 billion in cash on hand. But apparently, Musk thinks that won't be enough money to cover all of Tesla's upcoming expenses.

Why Musk wants a blowout quarter

Tesla's past efforts to raise capital in the equity markets have been helped by the fact that its stock has traded at a sky-high valuation for a while. That valuation has been supported by investors' faith in Musk and Tesla's plans, rather than by its fundamentals.

The problem for Tesla is that investors' faith has slipped recently. Before this past week, Tesla's stock was down about 4.6% year to date. But things got considerably worse after investors got a look at the implications of the Solar City deal. 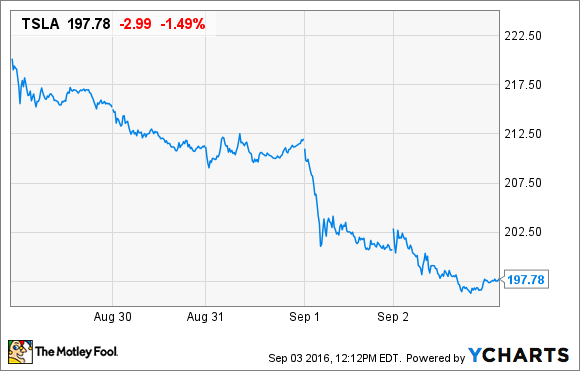 After Friday's close, Tesla was down over 14% year-to-date. As the stock price slips, the effects of the dilution created by any moves to raise capital by issuing new shares will increase, because Tesla will need to issue more shares to raise a given amount of money. In theory at least, that will put further downward pressure on the shares.

That's why Musk wants Tesla to post a great result for the third quarter: He needs to give Tesla's stock price a lift.

This shouldn't work, but will it?

Bloomberg's report might mean that investors see through any upside surprises in Tesla's third-quarter result. After all, if Tesla simply postpones critical spending until October or scrambles to "pull ahead" production to show a greater number of cars shipped in September, that doesn't mean much from an investor's perspective. Or at least, it shouldn't.

But this is Tesla, and it's certainly possible that a positive earnings surprise could give Tesla's shares a temporary lift despite the Bloomberg report. That in turn would give Musk a window to raise more capital at a decent price.

The problem for Tesla is that this game will get harder and harder to play as investors catch on to what Musk is doing -- and given Tesla's ambitious and expensive business plan, it's likely that Tesla's next capital raise will be far from its last.

John Rosevear has no position in any stocks mentioned. The Motley Fool owns shares of and recommends SolarCity and Tesla Motors. We Fools may not all hold the same opinions, but we all believe that considering a diverse range of insights makes us better investors. The Motley Fool has a disclosure policy.