Ford has expanded a previous recall of defective door-latch parts to cover 2.3 million vehicles. That made it expensive enough that Ford felt the need to lower its full-year guidance. Here are the implications for investors.

Ford Mustangs are among the vehicles recalled by Ford for defective door latches. The recall is expected to cost Ford $640 million. Image source: Ford Motor Company.

Ford Motor Company (F -1.56%) said on Thursday that it's lowering its full-year adjusted pre-tax profit guidance to about $10.2 billion after expanding a previously announced recall of vehicles with defective door latches to cover a total of 2.3 million vehicles.

All automakers have recalls. They're part and parcel of the auto business, and many are no big deal. But Ford said it expects this set of recalls to cost about $640 million, enough to impact its full-year profit guidance. That makes it worth a closer look.

What Ford is recalling and why

Ford said it would expand a recall of defective door latches, originally announced on August 4, to cover a total of 2,383,292 vehicles. The original recall had been limited to about 830,000 vehicles in certain hot-weather states. Ford expanded it to cover all affected vehicles in the U.S., Canada, and Mexico at the request of the National Highway Traffic Safety Administration.

Here's what Ford said about the defective latches and the vehicles affected:

Some recalls involve purely hypothetical risks, but not this one. Ford said it has identified one reported accident and three reported injuries that may be related to the defective door-latch spring tabs.

What Ford said about the cost of the recall

Here's what Ford said about the recall's cost in a filing with the Securities and Exchange Commission on Thursday:

The total cost of the expanded field service action, which includes the costs associated with the field service action announced on August 4, 2016, is estimated to be about $640 million and will be recorded in our third quarter 2016 adjusted pre-tax results. The costs will be incurred primarily by our North America business unit.

The change to Ford's full-year guidance

Ford had previously said it expected its full-year adjusted pre-tax profit to be equal to or greater than the $10.8 billion it earned on that basis in 2015. Ford earned $6.8 billion on that basis in the first half of the year; during the second-quarter earnings call, CFO Bob Shanks said Ford said it expected its third-quarter profit to be lower than usual because of new-product costs, but he maintained the full-year guidance.

This slide from Ford's second-quarter earnings call shows all of its guidance as of July 28. 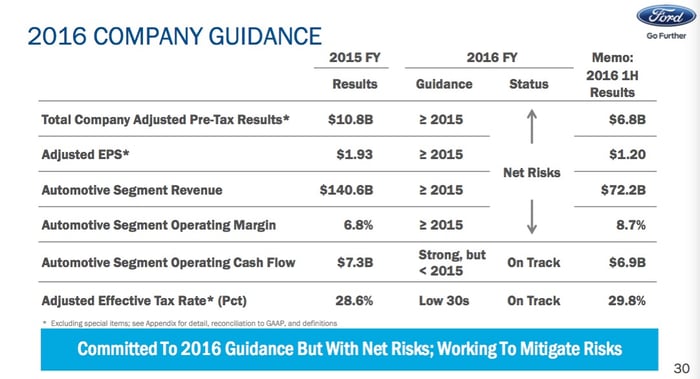 The costs of the recall led Ford to roll that expectation back. Here's what it said in that SEC filing on Thursday (emphasis added):

The upshot for Ford investors

Recalls happen. For the business -- aside from concerns about the three people who were injured -- it's simply an expensive hassle. Ford's underlying business remains more or less on track, and this doesn't change the long-term investment case at all.