Please ensure Javascript is enabled for purposes of website accessibility
Log In Help Join The Motley Fool
Free Article Join Over 1 Million Premium Members And Get More In-Depth Stock Guidance and Research
By Rich Duprey - Sep 10, 2016 at 8:05AM

Some analysts are forecasting near-term doom and gloom for the firearms industry, but that prediction is just as unjustified this quarter as it was the last time around.

Smith & Wesson had another big quarter, but some analysts fear the good times are coming to an end ... they're not. Image source: Flickr user Dennis van Zuijlekom.

Here we go again. Smith & Wesson (SWBI 0.53%) reported blowout earnings for its fiscal 2017 first quarter earlier this month, and analysts right away predicted that the good times have come to an end for the gunsmith. But just like last time, they're misreading the data and arriving at the wrong conclusion. Smith & Wesson revenue isn't going to fall but will instead continue its impressive growth streak -- and here's why.

During the earnings call, not only did Smith & Wesson point out that firearms sales rose 40% for the period with earnings per share doubling to $0.62 -- results that crushed analyst estimates -- it also said distributor inventories increased by 64,000 units to a total of 155,000 ahead of the fall hunting season and the start of the holiday shopping season.

Industry peer Sturm, Ruger (RGR -0.15%) also reported higher inventories in advance of the holidays and noted that sell-through from independent distributors to retailers increased 20% in the second quarter, while FBI background checks were 15% higher.

The increased inventory levels this year for Smith & Wesson are actually below 2015 levels, even though the year-over-year increase was the same. That means there is no excess buildup of inventory at distributors. When such buildups have happened in the past, the situation led gunmakers to engage in discounting. Instead, Smith & Wesson is approaching the busiest sales periods of its year with clear sales channels, which suggests that the record pace of growth it has enjoyed for the past few years will continue.

The reason analysts are once again claiming Smith & Wesson's boom is about to go bust is due to the latest background check data from the FBI. In August, NICS checks for would-be gun buyers came in just 6% higher year-over-year, while in previous months, the rate of growth had been in the double digits. But earlier this year, they similarly argued that because the monthly increase had temporarily slowed, sales would suffer. That obviously proved wrong, and it will happen again.

Not only are we moving into the firearms industry's prime selling season, but there is a presidential election to be decided, one in which gun control is a major issue. But while President Obama's efforts to increase gun control did drive some of the sales growth, the truth is more people have been moved to buy guns due to concerns for their personal safety.

Smith & Wesson's Shield model was designed for such use, but in the broader market as well, concealed carry weapons are the most popular guns among consumers. Equally important has been the shift in consumer demand to the modern sporting rifle (MSR), the most popular firearm in all of the U.S. 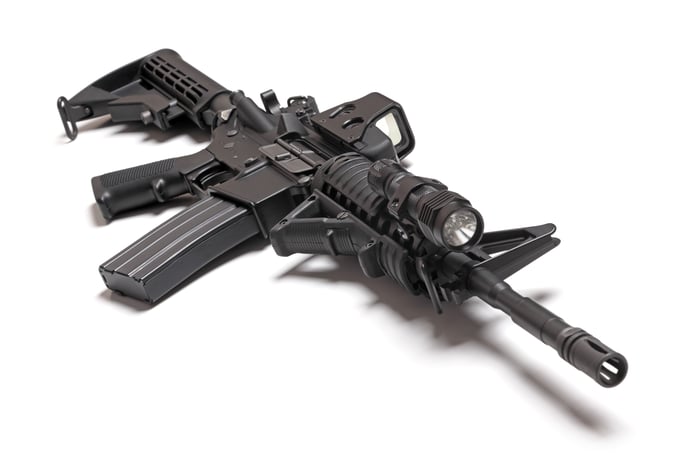 Modern sporting rifles use the same ammunition as hunting rifles, have the same capacity, the same rate of fire, and the same velocity, but aesthetic differences make them appear more dangerous ... they're not. Image source: Getty Images.

Modern sporting rifles have become one of the most preferred offerings on the market due to their flexibility and adaptable nature. They are best exemplified by the AR-15, which offers adjustable stocks, a multitude of sights, and manageable recoil, making it suitable for most shooters. They might look scary, but they're functionally the same as just about every other semiautomatic rifle on the market.

Smith & Wesson noted it was able to gain market share in the long gun category due to consumer demand for the MSR. Revenue for these guns more than doubled in the quarter, and MSRs were responsible for virtually the entire increase, while the company's new M&P branded sport MSR contributed to a 30% increase in new product sales (as did new concealed carry pistols). Ruger had similar results, reporting its new AR-556 MSR and the compact LC9s pistol drove sales higher, accounting for one-third of firearm sales in the quarter.

Between the background check data, latest earnings results, and shifting consumer trends, none of it points to a business preparing for a drop in demand. That's why you can expect sales at Smith & Wesson to continue building on their positive momentum.