Taser and Las Vegas Sands crushed the market over the past decade.

Many financial advisors believe that if you have $10,000 to invest, you would be better off putting it in an index fund instead of individual stocks. While that's certainly a sound, low maintenance strategy, investors also shouldn't underestimate the power of $10,000 to crush the overall market when invested in the right stock.

How Taser stunned the market

Many analysts initially dismissed Taser as a speculative and unprofitable play, questioning the future demand for stun guns. As a result, the stock dropped to a low of $5.35 per share by late June. If you bought 1,869 shares of the stock then, your $10,000 investment would be worth almost $565,000 today.

Taser's outlook changed after the terrorist attacks of Sep.11, 2001. Two months before those attacks, the FAA stopped allowing pilots to carry guns due to concerns about bullets puncturing windows. With those rules still in place following the attacks, major airlines placed bulk orders for Tasers as alternative in-flight weapons -- which boosted Taser's bottom line into the black by the end of the year. Thousands of police departments followed that lead, and Taser launched a model for mainstream consumers the following year. By 2003, it bought out its biggest rival, Tasertron, which made Taser the dominant name in stun guns and gave it access to new military markets.

In 2008, Taser launched its Axon body cameras for law enforcement and Evidence.com, a cloud-based platform for collecting that video. Demand for those body cams surged over the past few years due to controversial police shootings across America. The robust demand for its core products has fueled incredible revenue and net income growth for Taser, making its stock one of the most impressive multi-baggers of the new millennium. 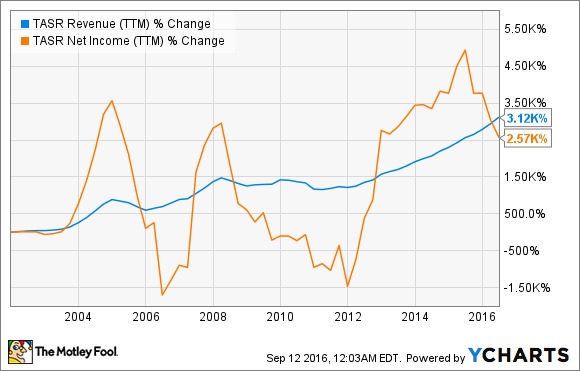 Casino operator Las Vegas Sands sank to an all-time low of $1.42 per share in March 2009 at the nadir of the financial crisis. Sales were plummeting as cash-strapped customers stopped spending money at its casinos and hotels, and its debt levels were surging due to its new projects in Macau. At one point, Sands was reportedly losing $1,000 per second.

To prevent Sands from going bankrupt, chairman and CEO Sheldon Adelson loaned the company $1 billion of his own money. That move bought Sands the time it needed to pull out of its nosedive and open new casinos in Macau. Soaring visits in Macau quickly made China a much more profitable market than Vegas, and its revenues soared. 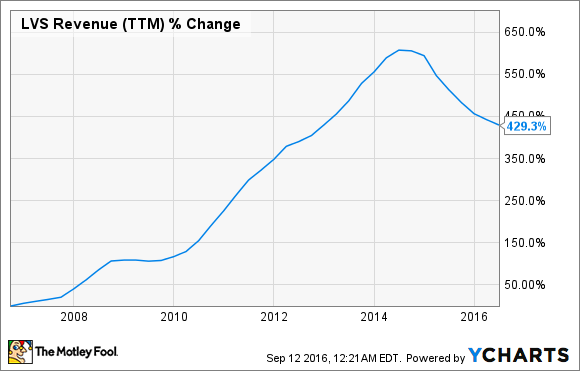 Shares of Sands were weighed down over the past year by concerns about sluggish spending in Macau amid weaker economic growth, a crackdown on corruption in China, and tighter regulations of junkets. However, both Vegas and Macau recently posted positive annual monthly growth in gambling revenues, indicating that Sands and its casino peers could be well-positioned for higher growth in the near future.

How can you spot the next Taser or Sands?

Taser and Sands might seem like great investments in hindsight, but it took a sharp contrarian eye, faith in their long-term growth plans, and nerves of steel to invest in either company while investors were running for the exits. Therefore, to spot the next 30- to 50-baggers in this market, investors should heed Warren Buffett's advice to "be fearful when others are greedy, and greedy when others are fearful."

Leo Sun has no position in any stocks mentioned. The Motley Fool recommends Taser International. We Fools may not all hold the same opinions, but we all believe that considering a diverse range of insights makes us better investors. The Motley Fool has a disclosure policy.