The nonlethal weapons and body camera company is showing incredible growth, but its profit story has many more chapters ahead.

As the law enforcement landscape has evolved over the past decade, one company has been there to provide the products that communities now demand: TASER International Inc. (AXON 0.43%).

The maker of  electroshock weapons has seen its business grow as nonlethal options make deeper inroads in law enforcement, but it's also been on the leading edge of the body camera trend. With more officers and citizens groups demanding that police wear the recording devices, Taser's growth has been driven to a new level, and that trend could continue for years to come. Here's the story of the business in three charts.

Investment in the future is rising

When TASER was just a Taser company, it didn't have to put a lot of money into research and development. Four years ago, the company spent less than $10 million annually on R&D.

However, as its body cameras have grown in popularity, the spending needs of the company have changed. Digital cameras need to be developed and updated regularly as the tech advances, and the Evidence.com database needed to be built out and expanded to meet customer needs. So, you get the spending growth below. 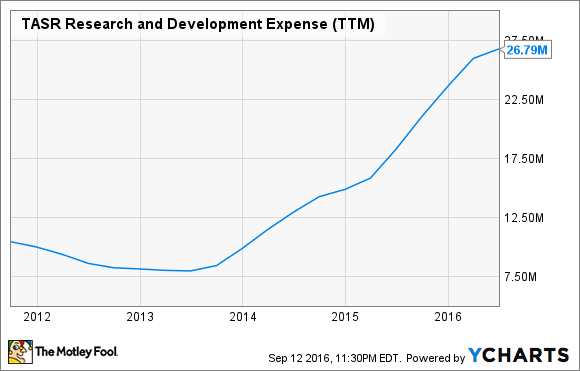 There are two things that can happen when R&D investments are made in an effective way. One is that revenue grows, but the other is that net income can fall even though the business is growing. And that combination is what we've seen lately at TASER.

The chart below shows that TASER's revenue more than doubled over the last five years. But that hasn't resulted in much additional income at all. In fact, over the past year, net income is down. 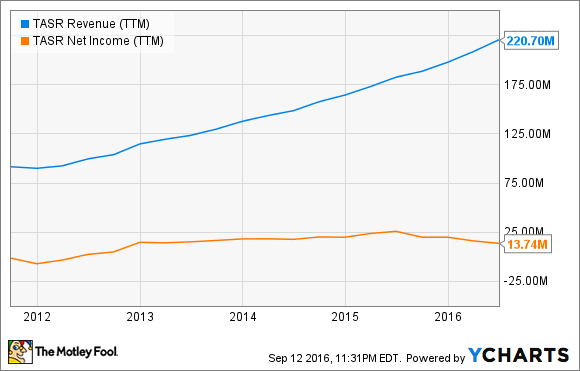 This dynamic has been driven by the investment in R&D, as well as the larger sales force needed to bring Tasers and body cameras to new markets around the world. It also hasn't helped that the profits from body cameras -- sales of which are normally accompanied by multiyear subscriptions to Evidence.com -- will be accrued over many years. For example, future contracted revenue in body cameras nearly tripled to $262.8 million at the end of the second quarter 2016. That revenue should be accompanied by strong bottom line growth in the future as investments in R&D and sales taper off. But for investors, the profits will be worth the wait.

A stock price that's on the rise

Investments in new products have led to the strong stock price performance charted below. The ride has been volatile, but over the past five years, TASER's stock has risen nearly 500%. 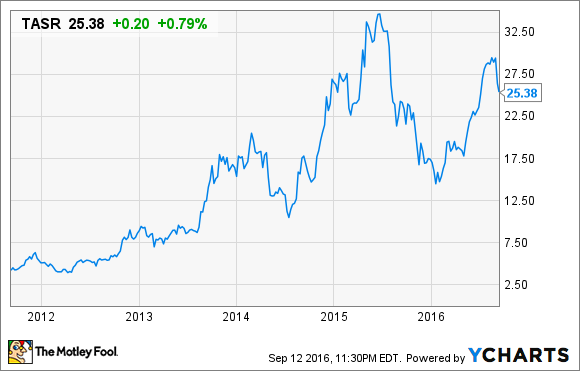 Riding the big wave of spending by law enforcement agencies on nonlethal weapons and body cameras has been a great move for TASER investors. If the company can continue to develop innovative products to serve its end markets, the stock has a lot of room to run higher. This growth story has just begun.