How can Ford use plug-in hybrid technology to make its F-150 pickup even more appealing to its customers? That's the kind of question the Blue Oval has been pondering. Image source: Ford Motor Company.

Like most big automakers, Ford Motor Company (NYSE:F) recognizes that the world is moving away from gasoline engines and toward "electrified" vehicle drivetrains, plug-in hybrids and fully electric vehicles, and it wants to be in front of that trend.

But there's an obstacle: Electrified vehicles cost more to build than their internal-combustion counterparts. That will probably change in time, as battery technology advances and Ford builds experience and scale. But Ford has to get there.

While Ford's executives seem committed to the benefits of zero-emission vehicles, the company doesn't really have a choice. Even if Ford didn't want to build electric and hybrid cars, tightening fuel-economy and pollution regulations will force its hand in a few years. Ford doesn't want to wait for that.

That's why CEO Mark Fields and his team have been pondering this question: How can Ford convince consumers to pay a little more for advanced hybrids and full-on electric vehicles in an era of $2-a-gallon gas?

On Wednesday, during Ford's annual Investor Day presentation, the team showed us their answer.

"We want to become a top player in electrified solutions, and I call it moving from a compliance mind-set to one of leading where we can win, such as with our commercial vehicles," Fields said during a presentation to investors on Wednesday.

What's that mean? It means that Ford will focus its electrification efforts on highly profitable market segments where Ford has a strong position. That will help it build expertise and manufacturing scale that in time will make it cost-effective to bring electrified drivetrains to the rest of its lineup, along with an infrastructure to support those vehicles, all while building market awareness with some of Ford's most popular and visible products. 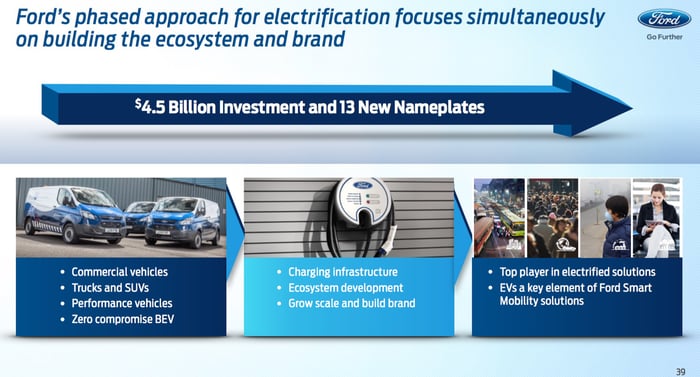 The view is by 2030, we will reach a tipping point where the number of electrified product offerings will be greater than the internal combustion engine. Ford is choosing to invest today to be prepared for this eventual outcome.

Let me elaborate on how we're building on our early efforts, to lay the foundation for long-term success once we reach this tipping point. There are really four key elements to our strategy. The first one Mark touched on, playing to our strength -- electing to compete in areas where we know where we have a dominant position in the marketplace. Commercial vehicles, trucks, utilities, and performance: These are sectors where we have iconic nameplate brands, tremendous favorable opinion, and more pricing power.

It's also going to allow our product development and marketing teams to take a different approach, in terms of how we go to market and start to showcase the full benefits of electrification beyond just fuel efficiency.

Trucks, commercial vehicles, sport-utilities, and performance vehicles are all parts of the market where Ford has a strong position, and where it currently generates big profit margins. Those are the segments where Ford will focus its electrification efforts, on the theory that those customers are most likely to buy into Ford's innovations -- and are most willing to pay for them.

In other words, rather than building an electric vehicle just to satisfy regulatory requirements (what Fields meant by "compliance mind-set"), Ford is planning to bring electric drivetrains to market in ways that will make customers feel they add significant value.

How might Ford incorporate electric drivetrains into its most gas-guzzling products in ways that will make its customers willing to pay extra?

Think about a plug-in hybrid Ford pickup that can summon its electric motors' immense torque to start a heavy load moving, or an SUV with an electric motor at each wheel that can adjust its traction on the fly in slippery conditions, or a plug-in hybrid Mustang that runs on electric batteries in normal driving -- but that instantly starts its powerful gasoline V8 when you floor it. Or a fleet of electric commercial delivery vans that operate quietly and don't ever need fuel, just a nightly recharge.

Clearly, there's a lot of potential for Ford to use electric and hybrid drivetrains in ways that add value to its most profitable products. In time, all Fords will be electric. Getting there will be a challenging and expensive journey. But it sounds like Ford has hit on a formula to give its customers some extra value, and its bottom line a little less pressure, along the way.