After decades in business, both continue to consume mounds of cash while generating no returns for shareholders.

Alternative forms of energy are undoubtedly going to be a big part of powering the world in the decades ahead. And it's likely that in some form, hydrogen fuel cells will play a measurable role in that future. Two of the best-known names in the fuel cell industry are FuelCell Energy Inc (FCEL 0.81%) and Plug Power Inc (PLUG 1.16%).

However, I have no plans to invest in either of these two companies -- at least not yet. And the reason is very simple and straightforward. After many years in operation, both companies have consistently destroyed shareholder value. And until they demonstrate the ability to generate a return for investors, I'm staying away.

Both have regularly used stock as currency

It's not uncommon for a growth company to sell stock to raise cash. That's one of the benefits of being a public company, particularly ones like Plug Power and FuelCell Energy, developing and refining a new technology that could have enormous growth potential. Tapping the equity market to fund growth has built most of the great companies in America.

While both of these companies have taken full advantage of equity sales to raise cash, neither has been able to use that cash to generate shareholder returns: 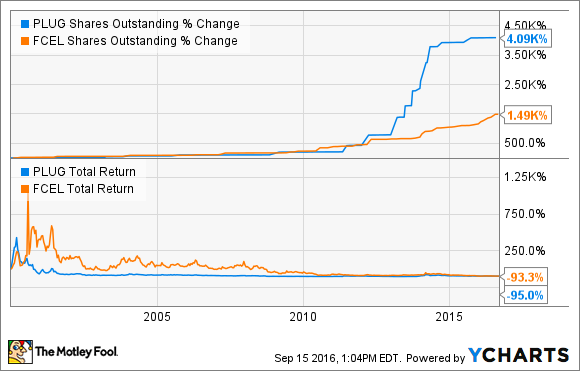 Even in a shorter time period -- the past five years -- investors have lost out while giving FuelCell and Plug Power lots more money: 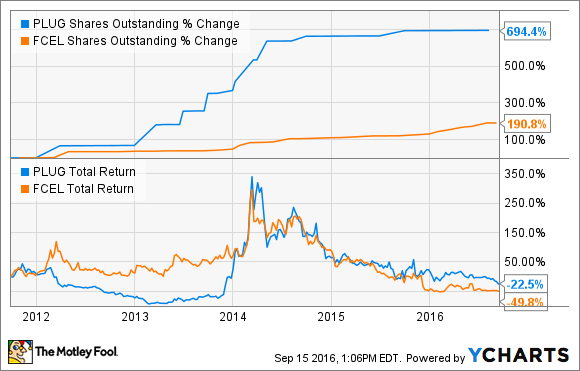 In other words, so far, they've only proven adept at taking more shareholder money to stay in business, and destroying value for investors.

To be clear, it's not just about the stock performance. The reality is, a stock can perform poorly over time even as a business improves. But so far, neither Plug Power nor FuelCell Energy has demonstrated the ability to generate positive financial returns: 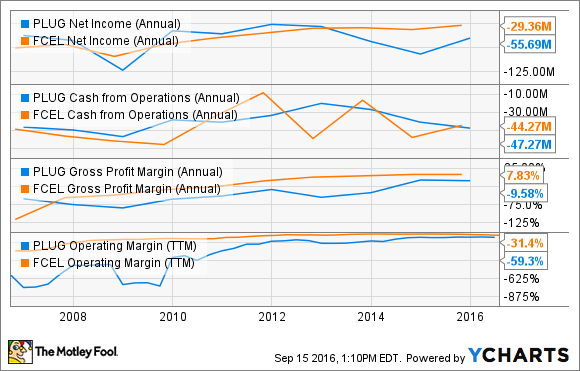 And that's why I'm staying away -- for now

As I wrote in the opening paragraph, it's likely that fuel cell technology will be an important part of the energy mix in the future. And I'm actually optimistic that these two companies will be a part of the solution to powering the world more cleanly.

But there's a long way to go, and before I'd invest in either of these two companies, I want to see financial performance that earns my investing dollars. That means evidence that they can sustain themselves on their own cash flows. So far, the only thing these two companies have proven is they can destroy value for investors.

And as much promise as the technology has, I'll sit on the sidelines until Plug Power and FuelCell Energy demonstrate they can actually make money.

Is It Time for FuelCell Energy to Electrify Your Portfolio?

Has FuelCell Energy Earned a Clean Bill of Financial Health?