Why would an auto giant want to start an urban bike-sharing business? Here’s a hint: It’s not about the bikes.

Ford Motor Company (F 5.22%) surprised investors with a pair of "mobility"-related announcements last week. It said it's buying Chariot, a crowdsourced shuttle-bus service, and that it will create a Ford-branded urban bike-sharing program in conjunction with bike-sharing leader Motivate.

If you've been listening to Ford CEO Mark Fields' recent statements around the Blue Oval's interest in "personal mobility," the purchase of Chariot makes some sense. But many investors were left scratching their heads over the bike-sharing thing. What does Ford, of all companies, want with bicycles?

It turns out the bikes have a lot to do with the shuttle buses. Read on.

How the bikes fit in with the shuttles

Jim Hackett is the CEO of Ford Smart Mobility LLC, a subsidiary created to "design, build, grow and invest in emerging mobility services." The LLC is a big part of Fields' plan to expand Ford's business into transportation services beyond traditional vehicle ownership. It's the entity that is buying Chariot and launching the bike service.

Hackett explained the significance of the bike-sharing service in a presentation to investors on Wednesday. But first, we need to understand what Chariot is about. Chariot is a shuttle-bus service that currently operates in and around San Francisco. Its buses run on routes that are crowdsourced, via requests made by rides using Chariot's smartphone app. Ford's vision for Chariot is that it will be expanded to many other cities as a lower-cost alternative to ride-hailing services like Uber and Lyft.

So, here's the thing: The more information Chariot has about desired routes, the more efficient it can be. That's where the bikes come in. Here's what Hackett said:

So we introduced this in San Francisco. What we're doing differently in San Francisco that isn't done in New York is we put telemetry on that bike. Telemetry is a form of communication, so now the bike is pinging data to us. Listen, here's the deal. The opportunity is not bikes. That's not why Ford's in it. The opportunity is data, and the data is super valuable because it tells us these invisible paths that people are taking in this complex city in terms of how they want to get around. And there's something else cool about it because we can take that data and we can connect it in ways that our new shuttle is going to connect to the cloud as well.

Here's the key slide from Hackett's presentation that ties the bike-sharing to the shuttle service. 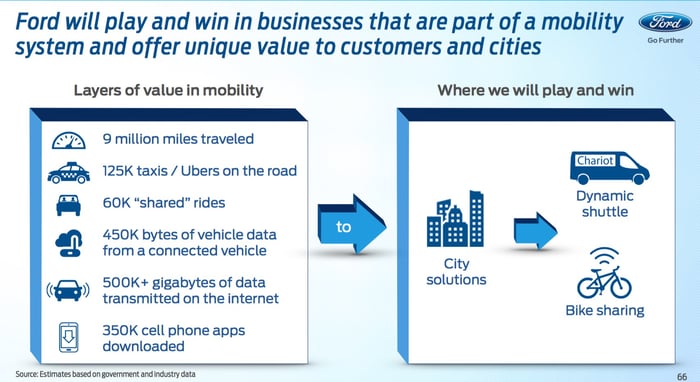 Long story short: The bike-sharing program is how Ford will sniff out potential new routes for its new shuttle-bus service.

Is this going to make any money for Ford?

In our core business [Ford's traditional business of building and selling vehicles], we're targeting 8% operating margins for our core products, and we're targeting at least 20% for the emerging opportunities and mobility services.

And here's what Hackett said a little while later about Chariot (again, emphasis added):

[Chariot] is a start-up. Very small enterprise, great management team, about 100 shuttles in San Francisco. They've proven a lot of things to us that we were learning in our experiments. We were doing shuttle kind of experiments over the last 2 years. These folks made a business out of it. We know that this can meet our margin targets that Mark talked about.